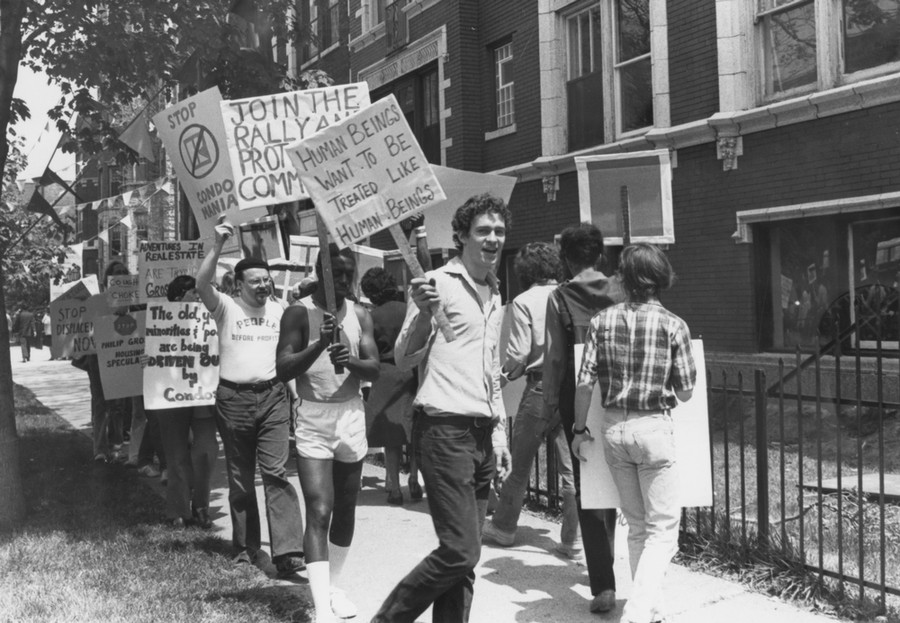 There is a long history of activism and protest on campus. Pictured here, the Hyde Park Tenants Union demonstrates in front of a local property to protest the increasing number of apartments being converted into condominiums.

Courtesy of The Chicago Maroon Archives

The final report from the Committee on University Discipline for Disruptive Conduct (CUDDC) was released on Tuesday, detailing several recommended changes to the way the University handles protests, event disruptions, and related disciplinary cases.

Among the report’s recommendations are proposals to implement Deans-on-Call specifically trained to respond to disruptive conduct, make more efforts to publicize rules and punishments regarding disruptions, and to create a system by which protests would be authorized in advance.

The report lists “framing principles,” including a statement that argues that “[d]isruptive conduct may itself be a form of speech, but that does not mean that it is a protected form of speech. Like other forms of civil disobedience, disruptive conduct may lead to disciplinary consequences for those engaged in such conduct.” Other listed principles for the report include affirmations of the University’s commitment to creating a welcoming and inclusive campus climate and to an approach to free speech centered around individual expression by members of the community and upheld by the University’s administrative authority.

The report’s recommendations are divided into five sections covering different aspects of University responses to disruptive conduct. One of these sections proposes that the All-University Disciplinary System be replaced by a new central process with a five-member panel of three faculty, one student, and one University staff member presiding over individual disciplinary conduct cases. The report also suggests that information about audience rules and Dean-on-Call and UCPD roles for speaking events, as well as consequences for disruptions, should be included in the Student Manual and posted on a new University website.

One of the report’s sections recommends that the University change its policies toward disruptive conduct by people who are not affiliated with the University, who are able to attend many University events but cannot be handled as easily as students or faculty under existing guidelines. In the future, according to the recommendations, “[w]hen appropriate, unaffiliated individuals who engage in disruptive conduct can be barred from all or part of the University permanently or for discrete periods under standards and processes set forth in the University’s No Trespass (Ban) Policy.”

The report recommends revising the University statute that defines disruptive conduct to highlight that disciplinary actions can be taken against individuals who act as part of a group. The new statute would also note that individuals could face punishment for involvement in multiple obstructive incidents over a length of time, because “[p]ersistent and serial conduct may in the aggregate rise to the level of disruptive conduct even if a single instance of such conduct does not.”

The CUDCC was created in June of 2016 following a charge by Provost Daniel Diermeier to review and suggest modifications to the existing All-University Disciplinary System, which was first implemented in 1970. The committee’s charge noted that the current system is inefficient and, as a result, rarely used. In recent years, the University has seen an increased frequency of protests at events featuring invited speakers, including former Cook County State’s Attorney Anita Alvarez and Trump staffer Corey Lewandowski.

Letter to the Editor: IOP Director Responds to Protests at Alvarez Event