As planning on the presidential library continues and developers begin to start projects in the area, community organizations are divided over the change they’ll bring to Woodlawn. 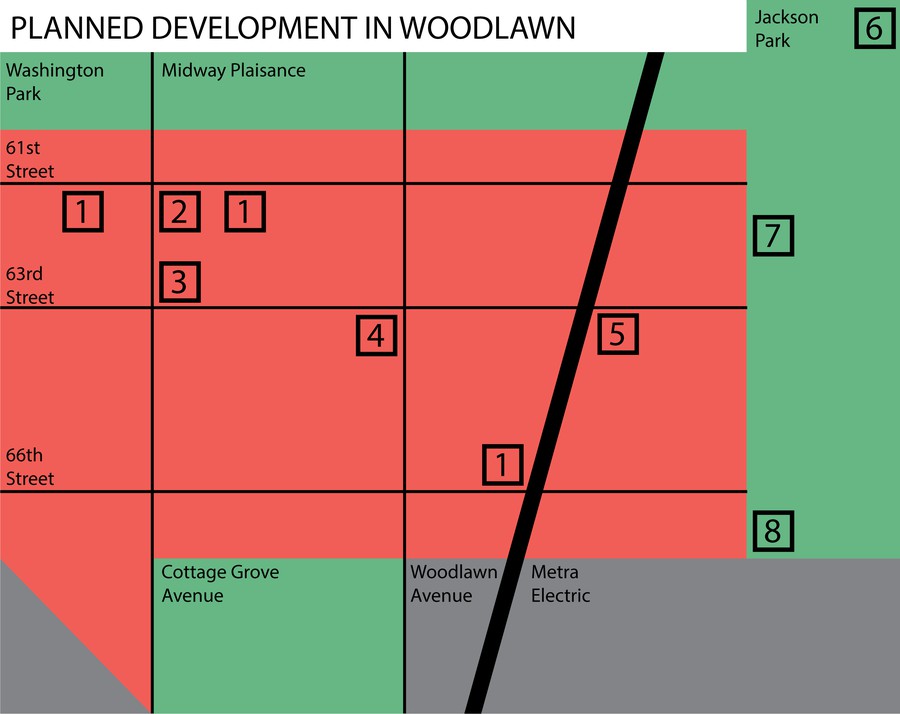 Hyde Park has seen its fair share of new construction over the past several years, but now Woodlawn, its neighbor to the south, is experiencing a building boom of its own. Developers are banking on the upcoming Obama Presidential Center and an upswing in the neighborhood’s population, causing both excitement and concern for changes to come.

As people and politics stream into Woodlawn, in large part due to anticipation of the Obama Presidential Center, various community organizations are jostling over what exactly Woodlawn is and what it should be.

One new organization was announced in a series of community meetings this past month. Tentatively called the Woodlawn, Washington Park, and South Shore Community and Economic Development Organization (WWPSS), it has the backing of the Obama Foundation and various other high-profile organizations, including the University and the City of Chicago.

According to Joanna Trotter, senior program officer of the Chicago Community Trust, the foundation that funded various forms of community outreach and research that led to the formation of WWPSS, the organization aims to “ensure that opportunities related to the development of the Obama Presidential Center are leveraged to benefit the residents and local economy in the surrounding community.”

The organization is currently soliciting applications for its board, which will consist of residents and civic leaders across these three neighborhoods. Nonetheless, some Woodlawn residents are hesitant to endorse it. Woodlawn resident Jeanette Taylor remarked, “Come to the people who’ve been been working on this. They don’t need to create an organization to try to undermine the community.”

Butler agreed: “I’m a little leery of [WWPSS] because they came in and said we’re going to X, Y, and Z. But there are other groups who have been working diligently on this for years now.”

“I was surprised when I read in the newspaper that Torrey Barrett and Byron Brazier received support to create a new organization in Woodlawn to ensure the Obama library benefits the community when there are already organizations fighting to protect residents here,” said Michele Williams, a longtime Woodlawn resident, referring to two area pastors who were involved in the creation of WWPSS.

Brazier, pastor of the 20,000-member Apostolic Church of God in Woodlawn, could stand to profit from the Obama Presidential Center. The center will be built just four blocks east of the church. According to the Sun-Times, Brazier said last month that the church would not sell any of its several parking lots to interested developers.

Since those remarks, a private developer released plans for a 10-story, 135-unit residential building on the corner of East 63rd Street and South Blackstone Avenue, just one block east of the church’s property.

In addition to the Obama Presidential Center, other changes planned for Jackson Park may spill over into Woodlawn. Ongoing restorations to the park’s Olmsted-designed landscapes, plans to construct a concert and event pavilion just south of the Museum of Science and Industry, and the upcoming re-design of the Jackson Park Golf Course—to be led by Tiger Woods and intended to qualify for the PGA Tour—are all expected to draw visitors to the area.

While the Obama Presidential Center will not be completed until 2021, developers are already digging in with their own shovels. According to DNAinfo, one builder aims to construct 19 single-family homes in Woodlawn by the end of the year. A four-story residential building is nearing completion on the southeast corner of East 61st Street and Cottage Grove Avenue. Down the street, at 63rd and Cottage Grove, a 55-unit complex is soon to break ground.

Yet these developments are a long way from restoring Woodlawn to its mid-century prosperity. In 1960, over 81,000 people lived in Woodlawn. “We didn’t have to go downtown for anything,” said Butler, who moved to Woodlawn in 1964, when the population was at its peak. “We had everything we needed right here. But when the people left, the shops closed their doors. It became a desert of all sorts of things, including food.”

While plenty of vacant lots still line 63rd Street, Woodlawn’s historic commercial stretch, there are signs of a retail rebound. Both new residential complexes on Cottage Grove will have retail space, and plans for a grocery store on the northwest corner of 61st and Cottage Grove are being finalized.

Butler reflected on these prospects for change. “Having the library come is an exceptional and wonderful thing for Chicago, and especially Woodlawn,” she said. “But we know it can also become a detriment if those who voted for [Obama] and fought for the library in the first place won’t be the ones who benefit.”