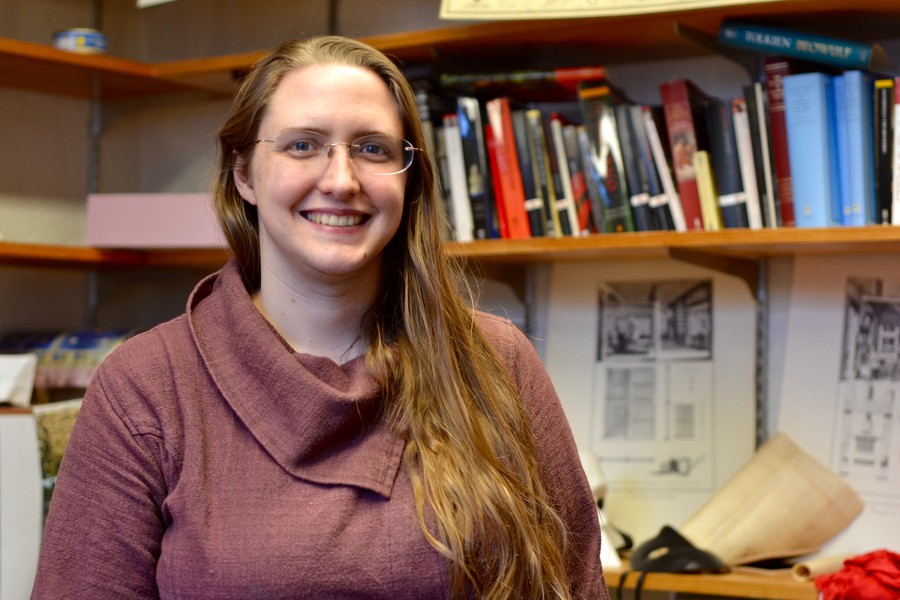 Ada Palmer is Assistant Professor of Early Modern European History and recent author of her debut novel "Too Like The Lightning."

Too Like the Lightning, the debut novel of assistant professor of early modern European history Ada Palmer, has been nominated for the Hugo Award for Best Novel, and Palmer has been nominated for the John W. Campbell Award for Best New Writer. The novel takes place in the 25th century, where flying cars remove the need for geographical nations, which are replaced with seven “Hives” that citizens sign up to be a part of. The Chicago Maroon spoke with the author about her science fiction novel, the first of a four-part series, and her classes at UChicago.

﻿Chicago Maroon: So what happens if there’s a crime committed between two people of different Hives?

﻿Ada Palmer: Yes, well that’s exactly how the book starts. It begins with somebody breaking into a Japanese newspaper office, stealing the rough draft of a newspaper article from Japan, going to Chile, breaking into a house there belonging to the Humanist Hive and leaving the rough draft in the trash can. This house is also the center of the computer system that runs the giant network of cars—it’s super high security. So why in the world did somebody steal an unpublished newspaper article, break into a super high security facility on the other side of the world, and leave it there is the opening question. This involves bringing in polylaws, which are a kind of lawyer or detective who specializes in handling situations when multiple Hives’ laws get involved at the same time, so we get to see exactly the details of this political system and how it handles crimes that involve two Hives, three Hives, four Hives, in one case, all seven Hives.

﻿CM: Interestingly enough, although it is a science fiction novel, the book is written in a very different style, right?

﻿AP: These books are written in the style of an 18th century philosophical novel with a strong narrative voice and lots of addresses to the reader and, “Oh dear reader, you think this person has done a terrible thing, but let me explain to you why the thing he did was not terrible,” and then he goes off on a long philosophical tangent about Voltaire. You’re just like, “That was delightful…slightly irrelevant, but delightful.” One of the processes for the reader of the book is to try to figure out gradually why the narrator is writing in this weird style and whether these events can only be understood through that lens.

CM: ﻿Where’d your inspiration arise from, and what made you want to write a book with such an intersection of so many topics like philosophy, politics, science fiction?

AP: ﻿I mean, good science fiction is like that. Great science fiction is full of ideas, not just one, or two, or five ideas, but new ideas in every page. Also, I was inspired by reading pre-modern science fiction, which I do as a historian. We think of science fiction as a late 19th- and 20th-century genre, but Voltaire wrote a science fiction short story called “Micromegas,” in which aliens from another star and from Saturn come to the Earth. When they make first contact with people, the first thing they discuss is, “Is Plato or Descartes correct about how the soul and body connect to each other?” and “Is Thomas Aquinas’s discussion of Aristotle’s divisions of the parts of the soul true?” Voltaire’s society was obsessed with providence, so providence and the existence of God and the immaterial soul was what his people talked to aliens about, and it was as plausible to him as our science fiction works are to us.

So I wanted to write science fiction that used the amazingly sophisticated vocabulary of modern science fiction, all the great developments we’ve had in terms of thinking about AI and flying cars, but to ask questions like Voltaire would. So this narrator is obsessed with providence and whether you can deduce its existence from observing the world, which is not a question that any author has ever asked of a sophisticated “flying cars” fictional future. So by bringing those two things together and asking an Enlightenment set of questions of a 21st-century-style science fictional future, I touch on a lot of points of culture that science fiction doesn’t explore as much as the 18th century did, like gender or human agency within action or determinism vs. free will.

CM: ﻿There’s been a lot of positive response to the book, including the nomination for the Campbell Award for Best New Writer in Science Fiction and the Hugo Award. What has your response been to that?

﻿AP: I’ve been overwhelmed and delighted. The book had really enthusiastic write-ups on NPR and Barnes and Nobles and lots of other places. There’s a wonderful subreddit folder just completely dedicated to finding out what’s going on in this book with threads and threads of people gathering evidence and data and debating. I expected it to come out and that the people who really liked that kind of thing would find it and read it and it would do okay. Instead, I guess a lot more people are enthusiastic about that than I had anticipated, and people really enjoyed chewing on a rich, challenging text that’s packed with ideas.

CM: What would you describe your focus here at the University as?

AP: I’m an intellectual historian, and I work on how historical events and historical circumstances shape the development and change of ideas over time. If most departments at the University teach things we think are true, I study why we think those particular things are true now, why we thought different things were true in the past, and how the change happened.

CM: You also do a lot of work specifically with the Renaissance. Tell me about your Italian Renaissance class.

AP: Yes, in the class I do a simulation of the Papal election of 1492 for my Italian Renaissance course. In the event, each of the students in the class is a different participant in the election. They give us Rockefeller Chapel to have the event in, and everyone is in costume. Each person has a unique character; you receive a packet with five to ten pages of information about your character’s personality and background and desires and opinions of everyone else—who’s an ally, who’s an enemy, who’s a peon that you don’t care about. You also get an envelope of resources that you can trade with other characters to try to achieve your goal. So there are cards that represent money, land, titles, or nieces or nephews you can marry to each other, or courtiers and servants that you can give each other as presents.

Then, over the course of the event, they first have to negotiate and elect a pope, and then after the pope is elected, they fight a war because some of the characters are the crown heads of Europe who are gearing up to have a war. But which war, who allies with whom, against whom, who invades what is determined by the shape of the alliances that develop over the course of simulation. Who ends up being allied in the course of trying to form cohorts to vote for popular pope candidates ends up totally reshaping the war, which then in turn reshapes Europe afterward.

It’s sort of an exercise in alternate history because every time I run it, there’s a different outcome in terms of what territory changes hands, who ends up powerful, who ends up weak. Then we talk about contingencies, how this could have happened, how what did happen was something else, how very, very tiny differences made completely different political outcomes. Then at the end of it, we read Machiavelli’s Prince, where, of course, he talks about exactly this decade and exactly these people and their actions. Once you go through the simulation, you get why those particular examples that Machiavelli uses makes sense in a way that his contemporaries understood but that we don’t because these people aren’t household names to us the way they were to Machiavelli and his readers. But the simulation means that by the time you get to the end, they are household names for us; in fact, they’re sitting in the room. And when Machiavelli says the king of France did this for this reason, you turn to the king of France and say, “You did do this, but was it for the reason Machiavelli said you did it?”

CM: So it gives you context for the readings you do afterwards?

AP: Exactly. Also, it immerses ourselves in the period because it’s very easy to look at different points in history, especially points like the Renaissance and just think everyone was an idiot. They’re deeply embedded in these absurd factional rivalries like the factional rivalry between the Guelphs and Ghibellines, and they end up ripping themselves apart and destroying everything they worked to build because of petty factionalism. If you, instead, really work on getting into the context and the culture and immersing yourself, especially through the act of trying hard to get your faction into power, you start to see why they couldn’t just drop it, why it had connections and power and a structure that went deeper than something you can just walk away from. So you go into this simulation feeling like Guelphs and Ghibellines are the arbitrary political categories that they are, but a week and a half in, you hate the Ghibellines if you’re on the Guelphs’s side, and you feel this, “I and everything I care about will burn if they take power; I can’t let that happen,” which was exactly what was happening in Romeo and Juliet. We don’t see the political stuff that Shakespeare’s viewers would have known was there. So a lot of it is about cultivating historical empathy, the ability to step out of our modern mindset, step into another mindset and see how, from the inside, the decisions that people made that seem irrational to us were rational to them given their pressures, their circumstances, and their understandings of the world.

CM: Are there any other teaching methods or ideologies or anything that you’re trying to bring to this class?

AP: There’s a lot of different ways of thinking about how historical change happens and how much control we as individuals have over historical events. None of these models really have any space for how you are an actor within history and how your actions affect history if you aren’t Julius Caesar and or a giant economic force but a giant person within a giant economic force. So when we come through in the end and discuss comparing the event to the real history, you get a picture of historical change being, not like an inevitable clockwork machine, but a lot more like a dam that’s overflowing. The dam is going to break, there is too much water, the social and economic and political forces are too strong—nothing will make there be peace at the end of this election. But the individual people are the ones digging the channels that are going to determine where the floodwaters go. So there will be a flood, but will any individual person, or city, or place be harmed by that flood? That’s up to the actions of individuals. And I think that’s a really fruitful way of thinking about history and our capacity to influence history. So we’re neither powerful nor powerless in that sense, and I think that it’s useful to learn to think about history in that way.