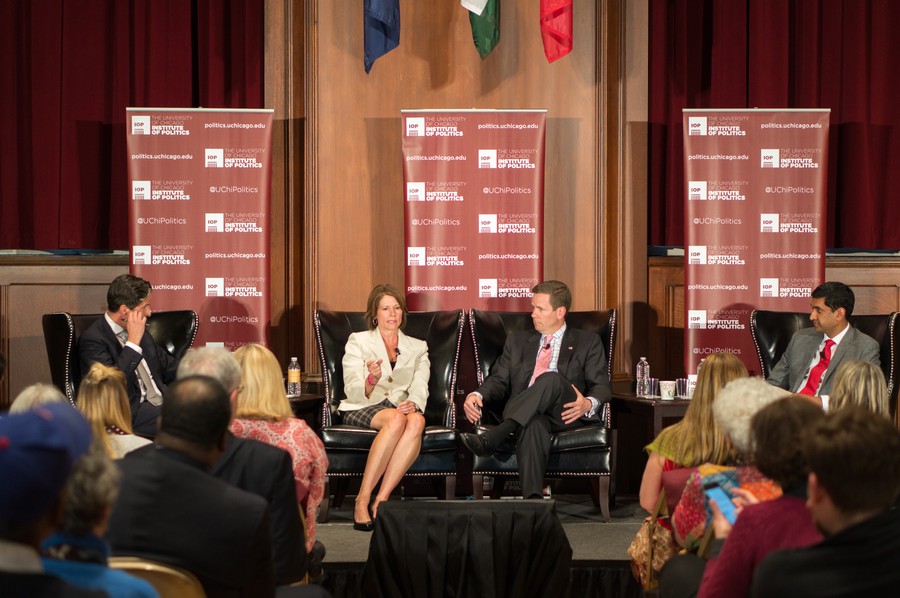 Each of the speakers represent districts pertinent to the country's current political state. In the words of IOP Director Steve Edwards, who moderated the discussion, Khanna represents “the heart of tech country,” California’s solidly Democratic 17th District, which encompasses much of Silicon Valley. Dold represented one of the country’s last remaining swing districts, Illinois’s 10th, and Bustos represents Illinois’s conservative 17th District, which is dominated by rural and manufacturing concerns.

“One of the things that’s been surprising about Trump is that he campaigned one way, and then he’s been governing in a very different way,” he explained. “Trump said, ‘I want to bring manufacturing jobs back to the United States.’ This was a populist message, actually changing sort of a trickle-down, Republican orthodoxy.”

Khanna alluded to an existing $123 million Congressional program with bipartisan support, the Manufacturing Extension Partnership (MEP), which aims to help small and medium-sized manufacturers become more competitive. Khanna believes that although Trump could easily gain both Republican and Democratic support to expand the MEP, he is instead conforming to House Speaker Paul Ryan’s agenda, which aims to cut such programs.

Bustos addressed the fact that Trump won in the same district that elected her.

“I’m the only Democrat in the entire Illinois congressional delegation outside of Chicagoland,” Bustos said. “I am a blue island in a sea of red…. Of the fourteen counties that I have, eleven are almost entirely rural, and he won every single one.”

Bustos told how over a decade ago, in the 17th District’s Knox County, a Maytag plant outsourced all its jobs to Mexico. Wages still have not recovered, she said, causing Trump’s declaration that he would bring jobs back to resonate in her district.

However, many of Bustos’ constituents who voted for Trump are losing faith in him.

“The failure of the Paul Ryan–Donald Trump healthcare bill, where they couldn’t even get enough Republican votes to support that, was eye-opening to people,” she said.

Dold emphasized the need for bipartisan cooperation in order to help the Trump administration govern effectively. He insisted that infrastructure is key, referring to the greater Chicago area as “the hub of the nation” and adding that investment in infrastructure comparable to other countries would create high-paying jobs.

“We’re seeing jobs pick up and go overseas,” Dold said. “Why? Because they’re going to lower tax jurisdictions. We want to talk about how to make sure that we’re competitive here…. It’s gonna be an outreach to those on the other side of the aisle to say, ‘What are those things that we need to do that’s gonna get you on board?’”

A previous version of this article stated that the Manufacturing Extension Partnership has a $140 billion budget. Its budget is $123 million.