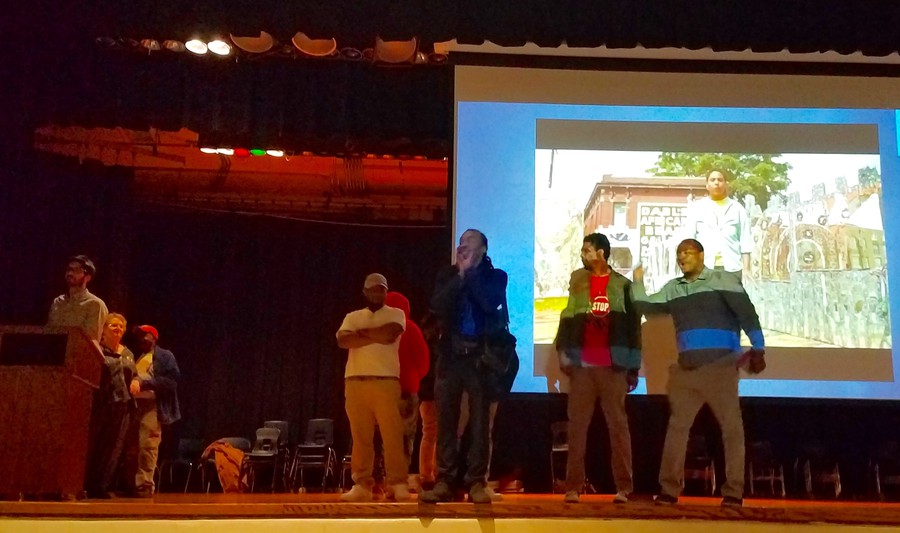 South Side community members gathered at a town hall meeting Tuesday to discuss plans for a set of Community Benefits Agreements (CBAs) for the construction of the Obama Presidential Library.

South Side residents and legal advocates have been working towards three CBAs for just under a year, since the announcement that the library would be built on a strip of land in Jackson Park. The selected site is across South Stony Island Avenue from Hyde Park Academy High School, where the meeting took place.

A CBA is an agreement between residents and a developer, under which the developer is obligated to take specific actions to improve or preserve the residents’ wellbeing in exchange for their support of the developer’s project. Meeting attendees are seeking three separate CBAs with the Obama Presidential Library, the city of Chicago, and the University of Chicago, respectively. According to the UChicago News website, “The University will support the Foundation and the City’s efforts in community engagement, planning and development, individual and institutional collaborations, and programming.”

At the meeting, coalition representative Naomi Davis highlighted the different areas the group hopes to prioritize in the CBAs, including job development, protection of current residents’ ability to stay in the neighborhoods surrounding the library, partnership between the library and local schools, and environmental sustainability goals, including replacement of the 21 acres of park land that the library will eliminate. Davis led the audience in reciting several phrases, including “Community benefits are negotiated, not declared” and “We’re not going”.

The meeting was hosted by the Obama Library South Side Community Benefits Agreement Coalition, which is made up of four South Side organizations: Southside Together Organizing for Power (STOP), Kenwood Oakland Community Organization (KOCO), Bronzeville Regional Collective, and the Prayer and Action Collective (PAC). The Coalition is represented by The Law Project, a branch of the Chicago Lawyers' Committee for Civil Rights Under Law (CLC).

Allegra Fisher, a lawyer with The Law Project, explained to attendees that a CBA is legally binding, giving South Side residents legal recourse if the organizations behind the library fail to follow the requirements.

Coalition representatives said that they have faced opposition from several sources, including members of the Obama Foundation and the University of Chicago, as well as powerful South Side figures, including Reverend Byron Brazier of the Apostolic Church of God. Several of these groups recently formed a nonprofit seeking a nonbinding agreement between the community and the library’s developers. Speakers at the meeting criticized the nonprofit’s members for suggesting that South Side residents could be sure that they would benefit from and not be harmed by the library’s development without written assurance.

Claire Cardy, a resident worried that she would be pushed out of her building by gentrification and rent increases, led the audience in voicing defiance.

After the meeting ended, a group of men ran onstage and took the microphone, but were drowned out by chanting from the audience after one of the group started speaking. At one point, one of those who ran onstage shoved an audience member with whom he was arguing. The pair was quickly pulled apart by other attendees. As the group left, the man who had attempted to use the microphone covered his face with a bandana and knocked over several displays the meeting’s leaders had been using to demonstrate the target groups of the CBAs.

The men were members of an organization that had previously been a part of STOP during the campaign to bring a level-1 trauma center to the South Side, but broke away after the campaign due to "differences over core values, and homophobic and sexist behavior,” according to a post to STOP’s Facebook page in May 2016. Several coalition members suggested that the men interrupted the meeting to promote their group.

Daphne McKee, a fourth-year and member of PAC, discussed her views on the Coalition’s goals with The Maroon.

“I think that economic development is a good thing, but it needs to happen in such a way so that when you improve the neighborhood, that doesn’t mean that you change it and just build and bring in new people who can afford not to have the same problems that the old residents had,” she said. McKee said that the coalition plans to continue pursuing negotiations, and will host more town halls, hopefully bringing in additional South Side organizations.

Sharon Payne, a member of STOP as well as one of the tenant organizations that make up many of the Coalition’s members, criticized the library backers’ callousness regarding possible gentrification. “You’ve got six-figure, seven-figure people that are coming in here and telling us what to do, but this is not affecting them. You’re not living in this this housing.”

Payne highlighted additional ways in which the CBAs could benefit the community, including meeting rooms for community gatherings, job trainings, and the promotion of black-owned businesses, but reiterated that preventing gentrification is a major priority.

“The bottom line is that in the United States, you’re only as good as your money, so all it takes is one accident or one illness, and guess what: you need affordable housing. So affordable housing is a right,” Payne said, encouraging University of Chicago students to get involved with the campaign and to recruit others.

Payne wished the CBA campaign were not as adversarial as it has become, but hopes the coalition’s numbers will give it an advantage. She paraphrased a quote attributed to prominent author and activist Alice Walker: “Most people give up their power by thinking they don’t have any.”

South Side With You

The Obama Foundation can prove it cares about the South Side through a community benefits agreement.