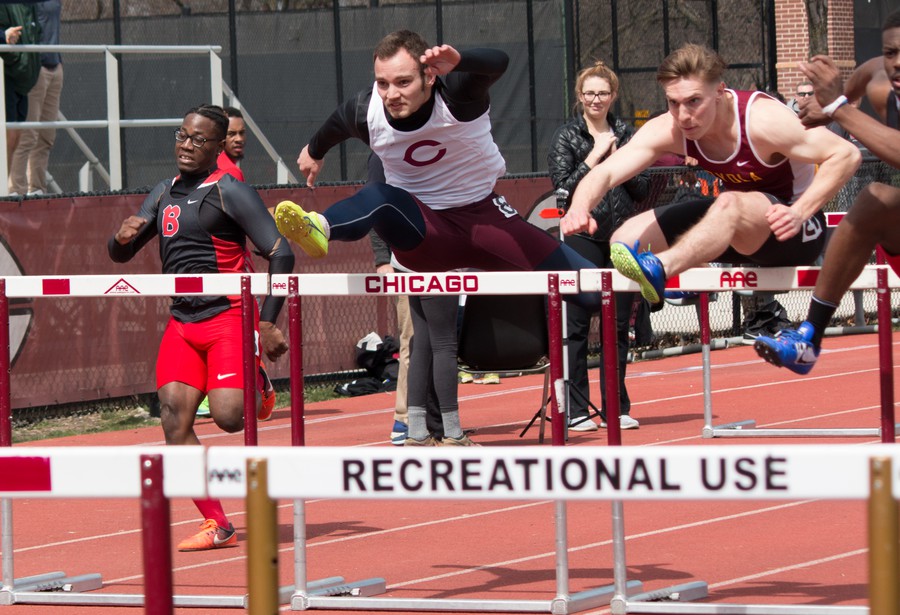 Third-year Will Ackerman clears a hurdle at the Ted Haydon Inviational earlier this month.

Last weekend the University of Chicago hosted the UAA Outdoor Conference Championships at Ted Haydon Track. On the women’s side, Wash U won the meet with 213.5 points, followed by UChicago in second with 182.5 points. The men’s title went to Carnegie Mellon University with 186 points, while UChicago was fourth with 118 points. The weekend was filled with outstanding competition, track facts, and tattoos featuring head coach Chris Hall’s face.

The women’s team produced four champions and 13 additional All-UAA performances. On Saturday, first-year Laura Darcey led the way to a sweep in the long jump with a winning jump of 5.60 meters. First-year Mary Martin took second with 5.40 meters, and third-year Vivian Barclay completed the sweep with 5.24 meters. Third-year Claire Costelloe dominated the 10,000-meter, with a time of 36:52.55, taking more than a full minute off of her previous personal best. First-year Maggie Boudreau ran a UChicago freshman record of 37:51.12 to claim third place. Other notable Saturday performances included third-year Ade Ayoola in the shot put (second place), first-year Isabel Garon in the pole vault (second place), and the 4x800-meter relay (second place).

On Sunday, third-year Khia Kurtenbach won the 5,000-meter with a time of 17:22.04, and her teammate third-year Kelsey Dunn captured third with a time of 17:43.21. Ayoola and Darcey continued to dominate in the field. Ayoola won the high jump with 1.64 meters and was joined on the podium by Darcey who took third with 1.59 meters. Ayoola noted that "our ladies were strong, supportive, and absolutely phenomenal. I'm so proud to be a part of such an incredible team."

“There were so many inspiring performances throughout the weekend. I could not be happier with how everyone performed,” Ayoola said.

On the men’s side, the Maroons had three champions and six additional All-UAA performances. Fourth-year Andrew Maneval led the way with victories in both the shot put (15.34 meters) and the discus (46.99 meters), and a third-place finish in the hammer throw (47.36 meters).

“I was very happy to win both the shot put and the discus. It was a great weekend for both the women’s and men’s teams filled with record-breaking performances, and a great way for the seniors to wrap up their careers,” Maneval remarked on the Maroons’ performance.

The 4x800-meter relay captured third place in a battle that came down to an epic final leg. Third-year Obinnaya Wamuo won the 400-meter hurdles in 53.94, and fourth-year Jatan Anand was second in a photo-finish 100-meter dash with 11.14. Both 4x100- and 4x400-meter relays claimed third place.

Overall, it was an outstanding weekend of competition with many performances that placed Maroon athletes in national-qualifying position.