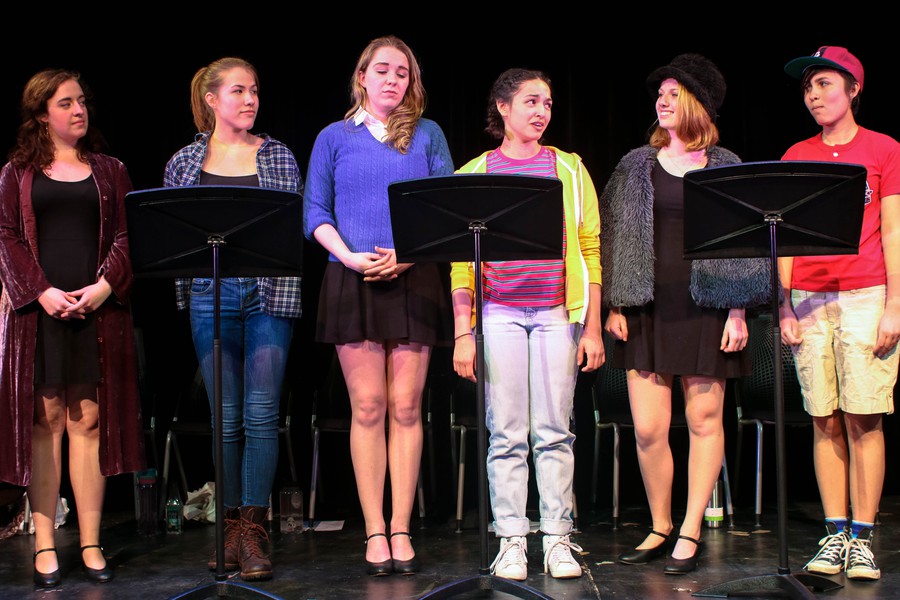 If you’re anything like me—bookish and easily mystified by science-fiction narratives led by a ragtag band of heroes—Madeleine L’Engle’s A Wrinkle in Time was a well-loved page-turner in your childhood. The crowded performance lab in Logan Center for the Arts suggested that many students felt similar nostalgia. The room buzzed as the last audience members squeezed into the final chairs and even crowded on the floor. They awaited this retelling of adventures through time and space during fourth-year Corson Barnard’s Theater and Performance Studies (TAPS) B.A. performance, a musical adaptation of L’Engle’s novel directed by third-year Sarah Stark.

Could one brief student project capture all of the story’s wacky energy that I remembered so fondly? In a narrative with time travel, aliens, and mysterious evil forces, the plot could swallow up this spirit in a matter of minutes. To my delight, Barnard took a different direction. Her project zoomed in on the characters, bringing their emotional growth to the forefront in eight beautifully composed songs. Their quest through space was a charming backdrop, but the real focus was upon Meg as she struggled to reunite her family and realize herself as the story’s heroine.

The performance began with the storm from the novel’s self-aware, overly foreboding first line: “It was a dark and stormy night.” Second-year Sophie Hoyt played a self-conscious thirteen-year-old Meg, opening the show with “Wait it Out” alongside first-year Saoirse Ryan as her mother. This song and the following, “A Home in a Storm” with first-year Maggie Bader as Cal, punctuated with periodic narration, established the show’s emotional landscape. However, these opening numbers were met with a lukewarm response from the audience. We weren’t yet attached to her version of the characters.

The next song, “An Explanation,” turned that feeling around. Mrs. Whatsit, Mrs. Who, and Mrs. Which (portrayed by second-years Corinne DiFrancesco, Emily Lovett, and Ryan, respectively) took the stage in matching caps to teach the heroes a few things. “Time,” the “Mrs. W’s” sang in brilliant harmony, “is just an illusion.” Call it a gimmick or a ploy for laughs, but regardless, the upbeat trio enchanted the audience.

While light on plot, the production remained true to its source with songs that featured the novel’s most memorable figures and moments. At one point, Meg, Cal, and Charles Wallace (played by second-year Maya Jain) met an eccentric woman known as the “Happy Medium” who challenged them to take their happiness into their own hands in a rousing number by Lovett. As they continued their journey, they recovered their father from the dark planet at the expense of Charles, who was taken under the influence of “IT” in the process. Meg sustained injuries, but was comforted by a strange, loving creature known as “Aunt Beast” (DiFrancesco) in the moving “Hero’s Lullaby.” With her newfound wisdom, Meg resolved to rid herself of self-doubt and reunite her family. Once all characters were safe and together once more, the piece closed with an ensemble reprise of “A Home in a Storm,” to the audible delight of the audience. “Beautiful,” someone whispered behind me as the performers hit their final chord.

Barnard’s numbers were emotional, reflective pauses, and her piece leaned on brief narrative interludes for explanation. After the show, I had to Wikipedia-search the plot, and I imagine anyone completely unfamiliar with the story would have been pleased with the music but confused in most other regards. A Wrinkle in Time proceeded with a surprising depth and energy for a show that ran only thirty minutes; but perhaps this proves the Mrs. W’s claims about the illusory nature of time. Barnard possesses a keen sense of character that her cast executed with great skill. Her short piece created a highlight reel of A Wrinkle in Time’s main action with great potential. I would love to see her expand upon this work, especially so I can revisit her songs. If not, my only option will be to find the Mrs. W’s and “tesser” through time myself.