South Siders Look to Bounce Back Against Grinnell 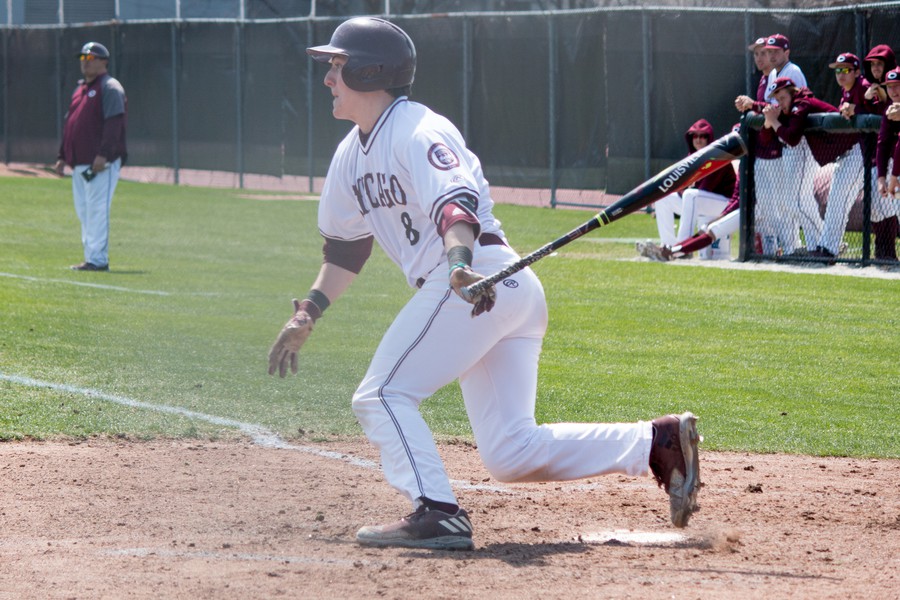 First-year Payton Jancsy begins to run the bases after crushing a pitch on April 8.

This past weekend, the UChicago baseball team went up against Case in a four-game series during which they suffered four losses. Despite the disappointing showing, a chance for redemption is on the horizon. The team will look to get its season back on track in a three-game series against Grinnell this upcoming weekend.

The Maroons began their weekend against Case with a close 7–5 loss. During the second game, the Spartans did not manage to pull ahead until the fifth inning, during which they scored one run. After the top of the eighth inning, it seemed as though Chicago may have been in a place to make a comeback after scoring one run to tie up the game. However, the Spartans came back in the bottom in the eighth to score a total of six runs. The Maroons were unable to make up the difference during the ninth inning.

The next two games followed in a similar fashion, with the Maroons suffering 9–4 and 6–4 losses. These four losses bring the Maroons’ season record to 17–10.

Given the weekend’s outcome, the team seems to be looking back on it with understandably bitter feelings.

“This past weekend was a good wake up call for us,” fourth-year Thomas Prescott said. “To be a good team, we need to be doing the little things right and not make the same mistake twice.”

While this past weekend’s matchup was indeed a disappointing one, the Maroons seem to be using that disappointment as a motivating factor going into this weekend’s series.

“[W]e are looking forward to this weekend,” second-year Justin Lo said. “We’ve been making small adjustments in our approach during practice. In order to be successful against Grinnell, we’ll have to make these adjustments and execute both on the field and at the plate.”

The matchup against Grinnell—who Chicago has not played since 2013—should prove to be an interesting one. Despite having not faced off in four years, the two schools have gone up against six common opponents over the course of this current season. The Maroons and the Pioneers had differing results against two of those opponents; Chicago was victorious against Elmhurst while Grinnell was victorious against Loras. With this in mind, it appears as though these two teams will be fairly evenly matched going into this weekend.

Despite the somewhat high stakes, the Maroons do not seem to be letting the pressure get to them.

“When we make an error, it is important to shake it off, flush it, and move on. The beauty of baseball is that the momentum of a game can change with one pitch,” Prescott said. “Having a short memory, staying focused, and not letting the past haunt you is the best thing we can do, and we are looking to have that mentality going into this weekend.”

The first game in the series against Grinnell will begin at noon on Saturday, April 29, here at UChicago. The second game will begin at 3 p.m., and the final game will take place at noon the following day.