Student Government Candidates Debate, Discuss Goals for the Year Ahead 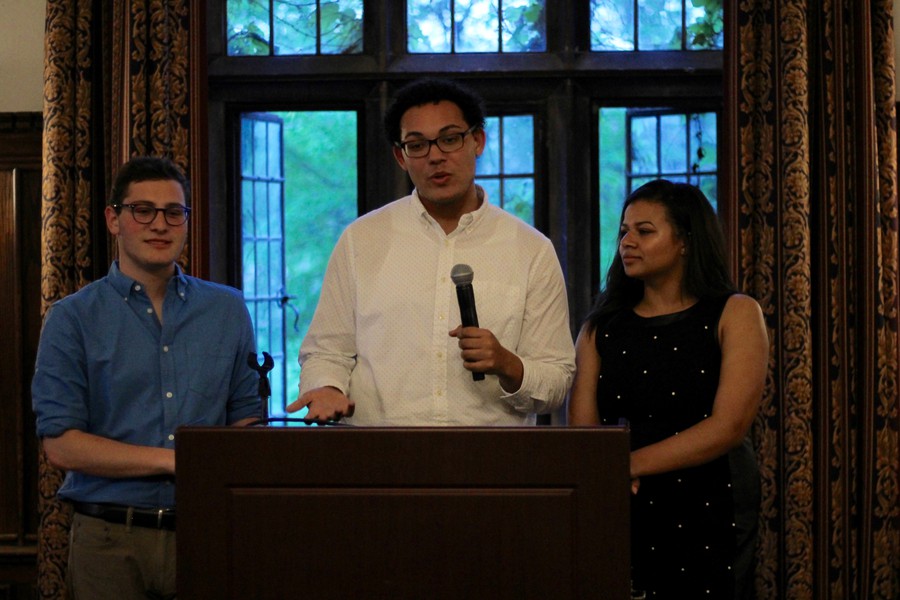 After introducing themselves, the Slate candidates spoke about why they decided to run in this election.

“The reason we decided to run was we thought that Student Government wasn’t doing enough on campus,” Cottrell said. “We saw that there had been no major accomplishments this year and that the past Student Government really hadn’t had its priorities in the right place, so we’re really excited to double down on communication with the student body to talk about issues like mental health awareness and ways that we can support more RSOs on campus.”

When asked about their plans to focus SG on more important issues, Cottrell replied, “In the future, we’re planning on having themed Assembly meetings.” These will be meetings focused on certain themes or campus issues, such as mental health resources. “Currently, there are 16 or 17 undergraduate reps and similar numbers of grad reps. They get together at least once a quarter to vote on and discuss these larger campus issues. The way that that’s handled right now is really ad-hoc…it’s currently unproductive.”

The Rise Slate also intends to improve communication between SG and the student body. Nau spoke about implementing “small weekly updates” including descriptions of “what we’ve been focusing on” or “what we’ve been talking about lately,” as well as holding weekly office hours in C-Shop.

Second-year Zander Cowan, third-year Christina Uzzo, and second-year Steve Berkowitz, who are the three candidates running for the position of Undergraduate Liaison to the Board of Trustees, then took the stage. After taking 90 seconds for their opening statements, the candidates took turns answering each question and spoke about the issues they felt were most important.

Berkowitz spoke about engaging people outside of SG in order to show them that “their ideas can be heard.” For example, he said, “student athletes here are really a huge part of campus, but yet, for them, they’re really sort of removed from the rest of the student body in that people are very busy with their academics and their extracurriculars, and it can be hard for people to juggle all these responsibilities. I think that being in a position in Student Government where you can engage everyone with all of their different commitments is something I’m really looking forward to.”

Uzzo expressed her excitement about running for this position in light of a recent change that was made to the position that allows the liaison to call meetings with the Board of Trustees.

“I would definitely stick with the current method of picking who gets to meet with the Board of Trustees and have them meet through an open application that’s open to everyone on campus,” Uzzo said. “Then [we’ll] try to pick the issues that are both most salient on campus and also relate most directly to the Board of Trustees so that those meetings can be as productive as possible.”

When the candidates were asked about the changes they wanted to make on campus, Cowan also spoke of his goal of improving mental health resources on campus.

“An issue that actually can be changed would be to provide better and quicker responses for mental health and counseling services to students at the University,” Cowan said. “I think that if you were to call today to make an appointment at Student Counseling, you usually can’t be seen for three or four weeks. I don’t think that’s okay, and I think we have the resources to improve that.”

Uzzo voiced her agreement with Cowan’s initiative, in addition to talking about her belief that funding for Student Disability Services should be increased as well.

“Currently, there are only two employees in that whole division,” Uzzo said. “I think that division should definitely be expanded in order to observe everyone’s needs.”

Berkowitz also expressed interest in working with groups on campus to improve mental health, saying, “I think there are lots of different ways of addressing the issue, and I think that we can definitely do more to offer people different avenues through which they can improve this aspect.

"I would definitely love to explore the ways with different organizations on campus…to really look at different ways in which we can tackle this problem.”

Voting will open on Blueprint at 10 a.m. on Wednesday, May 3. All students are eligible to vote, including those on extended status.