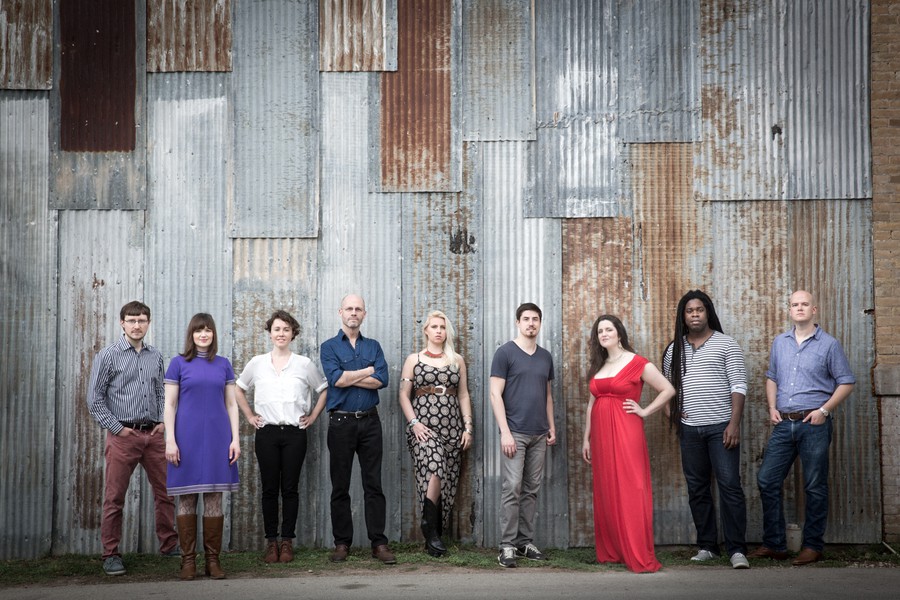 On Sunday, April 2, the eight-voice ensemble, Roomful of Teeth, made its first appearance in Chicago at the Logan Center's Performance Hall with a breathtaking concert for both the singers and the audience.

The curiosity of this group begins with its very name, an enigma in itself. When this Grammy–award–winning group is presented as “reimagining the expressive potential of the human voice,” it’s hard to know what to expect. The group is known for working with a variety of vocal traditions, from Korean pansori to Persian classical techniques to death metal.

Its program, featuring two compositions, was based on the dynamism between the individual and the collective. The performers, without costume or dress code, appeared not as a group but as individuals. Until, that is, they started singing. The first piece, Ted Hearne’s “Coloring Book,” was a vocal composition based on poems written by James Baldwin, Zora Neale Hurston, and Claudia Rankine reflecting on their blackness.

As he introduced “Coloring Book,” artistic director and conductor Brad Wells explained that for Hearne, this composition was an “exploration on his own whiteness through the poetry of African-American poets from three generations.” The eight voices assembled in dissonant harmony and dissected each word into a myriad of sounds, pitches, and melodies, as if unveiling their inner possibilities.

Vocalizing the poems brought out the violence of the poets’ questions, and the yearning for an answer. The composition used all the features of voice: mechanical speech combined with the sound of breathing became notes and heartbeats. The singers’ voices gathered in a masterful exploration of how identity is constructed both from the outside and from within. Each individual voice interacted with the others in a horizontal construction, without creating hierarchy.

The second piece was the Pulitzer Prize–winning Partita for 8 Voices composed by Caroline Shaw, a member of Roomful of Teeth. Beginning with smiles and careful glances to one another, the performers acted much more as a cohesive group. Their sounds evolved in tandem, moving slowly to a breathtaking climax. If the first composition was already impressive in mastering rhythm, the second half was incomparable in terms of vocal techniques. This piece skillfully wove together different musical traditions: crystal clear soprano voices of classical Western music blended with Inuit throat singing techniques and nasal Corsican voices. The audience, up to this point sitting in a thick, focused silence, responded collectively and with enthusiasm to the sudden, coordinated shift from a general humming to a clear harmony in Passacaglia, the last movement.

“For me, these pieces, and especially the Partita for 8 Voices, are all about joy and simplicity. This is how I feel when I sing,” said Martha Culver, one of the sopranos, after the performance. How can something as apparently technical, complex, and meaningful as what I just heard be described as simple and joyful?

Perhaps it was the simplicity in their postures, their outfits, or the simple joy of creating sound together, of coexisting and of feeling that it is possible to live one’s voice fully while being part of a larger entity, never oppressed, never isolated. The performance was an astonishing travel through the borderless land of voice, sound, speech, and music, while remaining a deep and essential human experience.