Pre-registration for autumn quarter classes is open until 5 p.m. on Friday.

A new hotel, and a changing 60th Street: The University has announced plans for a 15-story, 180-room hotel at the corner of 60th and Dorchester, which is right next to the site of the Obama Presidential Center. A University spokesperson told DNAinfo that while it will be privately owned, the hotel will provide services for the University. It will include “a 1,500-square-foot fitness center, 2,200 square feet of meeting rooms and an 85-seat restaurant and bar.” 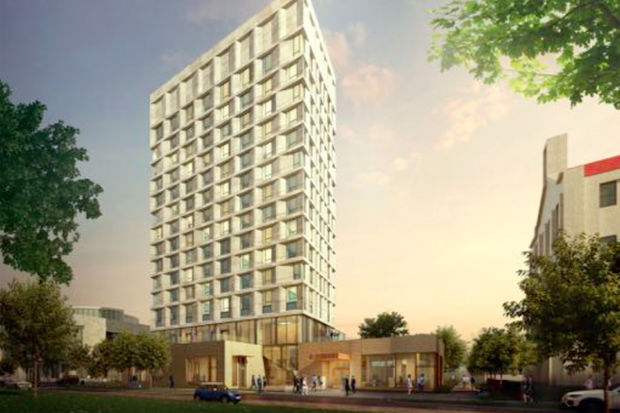 ** Last month, President Zimmer told The Maroon, “I think we’ll see a lot of development south of the Midway but north of 61st Street.” The University is building an 11-story conference room at 60th and Woodlawn, and has talked about building another dorm south of campus.

No more bake sales: RSOs will not be allowed to fundraise by selling homemade goods under a new University food policy that takes effect this summer.

Admin responds to anti-SJP posters: In an e-mail to the campus community, Provost Diermeier and Dean Rasmussen said that all flyers targeting students will be removed. “While the University supports the expression of diverse points of view on issues of the day, defamatory statements about individual University community members and groups and targeted harassment of students are antithetical to our values and expectations of critical inquiry and debate,” they wrote.

Anna Chlumsky (A.B. ’02), known for her role on the HBO comedy Veep, took a roundabout route to professional acting: she came to the U of C to study paleontology and ended up majoring in international studies. Chlumsky told The Maroon that she values her UChicago education even though it wasn’t directly related to her career choice: “It’s about learning and it’s about becoming a person and…knowing how to look at the world from all angles and figure out your place in fitting in that. That’s really what school is.”

Electric Dreams, a new sci-fi Amazon series, is filming in Hyde Park this week at the Eckhardt Research Center, according to DNAinfo.

Columnist Ashton Hashemipour argues that disregarding the perspectives of others merely because they have privilege might feel cathartic, but will do little to foster productive dialogue. “Ultimately, it would be in everyone’s best interests to have more diverse, tolerant, and far-reaching debates with privileged individuals about relevant sociopolitical issues,” he writes.

The Life of the Mind gets wicked cool for third-year rapper Ben Glover. Read this week’s artist feature to learn more about Chief Wicked himself.

From jazz concerts and “Zoomba” at the Lincoln Park Zoo to a conversation with Hamilton cast members, this week’s Exhibit [A] is chock-full of ways for you to embrace your artsy side.

Men’s tennis: The weekend was a wild one on the courts, with the team bowing out after a stunning upset.

Women’s tennis: The team carries on the Maroon name, advancing to the quarterfinals.

Cricket: The club team dominated rival Northwestern, improving to 3–1 for the season.

How democracies erode: For Vox, Law School professor Aziz Huq responds to Trump’s firing of FBI Director James Comey, arguing that “Is the firing legal, and is this a constitutional crisis?” are the wrong questions to be asking. According to Huq’s research, the decline of democracy is often marked by autocrats disabling “internal monitors of governmental illegality by the aggressive exercise of (legal) personnel powers.”

Thoughts on the aftermath of the French election: Political science postdoc Daniel Nichanian writes in Democracy that Emmanuel Macron’s presidential win has led to rifts that may mark the demise of the united plural left in the country.

——
Mark your calendars: Curious about the Black Sphere sculpture outside the campus bookstore, or the other pieces of public art on campus? A free walking tour will begin at 58th and Ellis on Wednesday at 5:30 p.m.