"Rent" Seizes the Day Throughout History 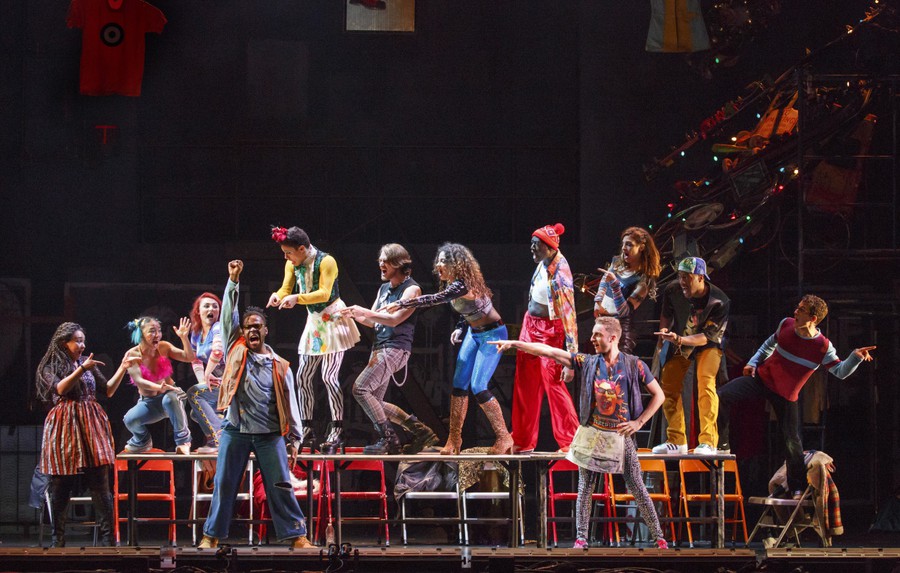 Now in its 20th anniversary tour, the rock opera Rent is living proof of the persistence of the past. Stopping in Chicago for a weeklong run at the Oriental Theatre, the performance was a satisfyingly energetic tribute to the original masterpiece. Its story of sexual liberation entwined with the devastation of the AIDS crisis was delivered with penetrative potency as I watched, hypnotized, during the Saturday matinée.

The show began not with a bang, but with more subtlety: the narrator, Mark (Danny Harris Kornfeld), introduced himself as a filmmaker living with his friend Roger (Kaleb Wells), a musician with HIV. The setting—Christmas Eve in an industrial sized loft on the corner of 11th Street and Avenue B—was not immediately apparent from the bare set of a few tables and undecorated stage platforms. The house lights remained on until the notes of the opening tune “Rent” resounded. With the audience not yet enveloped in darkness, the boundary between actor and viewer was ambiguous; the audience was not just watching the story, but a part of the action.

The relationships between the characters quickly unfolded. Mark wants to “document real life” by making a film about his experiences. Roger becomes involved with a nightclub dancer, Mimi (Skyler Volpe), and both eventually reveal that they have HIV. More romance enters the scene as Tom Collins (Aaron Harrington) falls in love with a drag queen named Angel Schunard (David Merino) and Mark’s ex-girlfriend Maureen (Katie LaMark) has a tumultuous relationship with her girlfriend Joanne (Jasmine Easler). With the stories forming webs of relations, the characters display their individuality while conveying their dependence upon the group for survival, their need for, as sung in “What You Own,” a “connection in an isolating age.”

Music and utter chaos balanced out the show's moments of more intimate expression. From the thunderous harmonies of “Rent” to the touching softness of “Without You,” the cast paid homage to the vibrancy of the 1996 Tony Best Musical winner and long-running Broadway smash. Though the show moves to a new city each week, the actors commanded the theater with aplomb. Merino was especially impressive during his drag performance of “Today 4 You.” He weaved intricate dances moves into his opulent vocal performance, projecting an infectious vivacity and sparkle, all in crazy outfits—from her signature Mrs. Clause dress to zebra stockings to shiny green vest. But her devastating death due to HIV was equally poignant with her partner, Tom, portraying his despair after she dies in “Without You” with stunning intensity.

Other performers portrayed equally outrageous personalities expertly crafted by playwright Jonathan Larson, recognizing the legacy of their roles while making them their own. LaMark had an attitude of self-centered extravagance worthy of Idina Menzel. Her imaginative poses during “Over the Moon” enhanced the already exhibitionist nature of its risqué and vulgar content. Roger tapped into the deep torment beneath his shaggy hair and devil-may-care attitude. Reaching such intensity that his voice often bordered on shouting, he captured a remarkable synthesis of longing and rejection, connection and alienation.

The characters impressed with their joint chemistry, in addition to remarkable performances as individuals. They danced in unity, embodying the community of Alphabet City while asking, “What binds the fabric together / When the raging, shifting winds of change / Keep ripping away?” They bopped their heads in unison to the opening rhythms of "La Vie Bohème," a tribute to La Bohème, the Puccini opera on which the show is loosely based. In a song that celebrates great communities and people—“To Sontag / To Sondheim / To anything taboo / Ginsberg, Dylan, Cunningham, and Cage / Lenny Bruce / Langston Hughes / To the Stage!”—its respect for the past parallels the nature of the Rent anniversary show itself and its mission to honor Larson’s legacy.

Yet Larson’s own lyrics question the capacity for a legacy. “One Song Glory” concedes to the possibility of leaving nothing behind—that terrorizing fear of leading a life devoid of meaning: “Glory / Like a sunset / One song to redeem this empty life.”

But, as Ben Brantley wrote for the New York Times in his 1996 review, "the leitmotif of the show is the image of time evaporating; its credo, quite unabashedly, ‘Seize the day.’”

Though the narrative of Rent describes a vanishing temporal framework, this anniversary show defies its very message. Although we no longer live in the same contextual circumstances of the late 20th century, the show exudes a certain timelessness. The love and heartbreak it carries through music allow it to transcend the past, present, and future.

Rent will play at the Oriental Theatre through May 14.