FIJI’s house was spray-painted with the words “FUCK RACISM” on the wall of the building facing University Avenue. 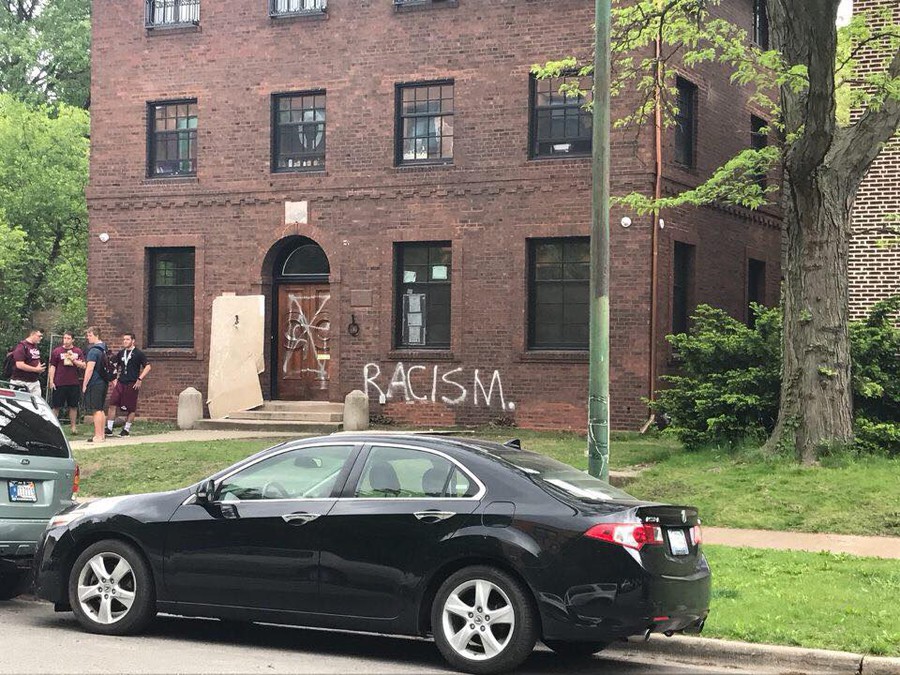 The Phi Gamma Delta (FIJI) fraternity house on University Avenue was vandalized in the early hours of Wednesday, May 17. A phrase opposing racism was spray-painted on the front of the building. The Chicago Police Department (CPD) is investigating the incident.

FIJI’s house was spray-painted with the words “FUCK RACISM” on the wall of the building facing University Avenue, as well as an “X” boxed in by a rectangle on the front doors of the building.

CPD officer Michael Carroll stated in an e-mail to The Maroon that police were called to the FIJI house at approximately 4:49 a.m. on May 17 to respond to allegations of criminal damage to property.

“Police found that multiple racial slurs [have] been spray-painted on the front of the building and door,” Carroll said. “Closed circuit television cameras recorded a masked offender defacing the property and subsequently [fleeing]. No arrests have been made and Area Central Detectives are investigating.”

It is not immediately clear what the “multiple racial slurs” refer to—no graffiti was visible except the statement on racism and the rectangle on the front of the building.

The fraternity covered the spray paint with cardboard until the Department of Streets and Sanitation came in the early hours of the afternoon on May 17 to wash it off.

Graduate Board President Robert Tamillow told The Maroon that he had no new information beyond what he had already stated to The College Fix in an e-mail interview.

In that interview, he stated that “[FIJI has] the perpetrator on video and [is] currently working with the University and the police regarding this matter.”

He further stated that “the chapter is not in any trouble, from the University or our International organization.”

FIJI faced accusations of racial insensitivity from several campus groups for hosting a party the night of May 5 where brothers were dressed in construction garments.

Requests for comment from the FIJI campus chapter have gone unanswered at the time of publication.

FIJI Responds to Allegations of Racism at Construction-themed Party

Several organizations released an open letter detailing their concerns on May 8. The campus chapter of FIJI responded to the allegations raised by MEChA and other groups in an open letter shared online on May 9.