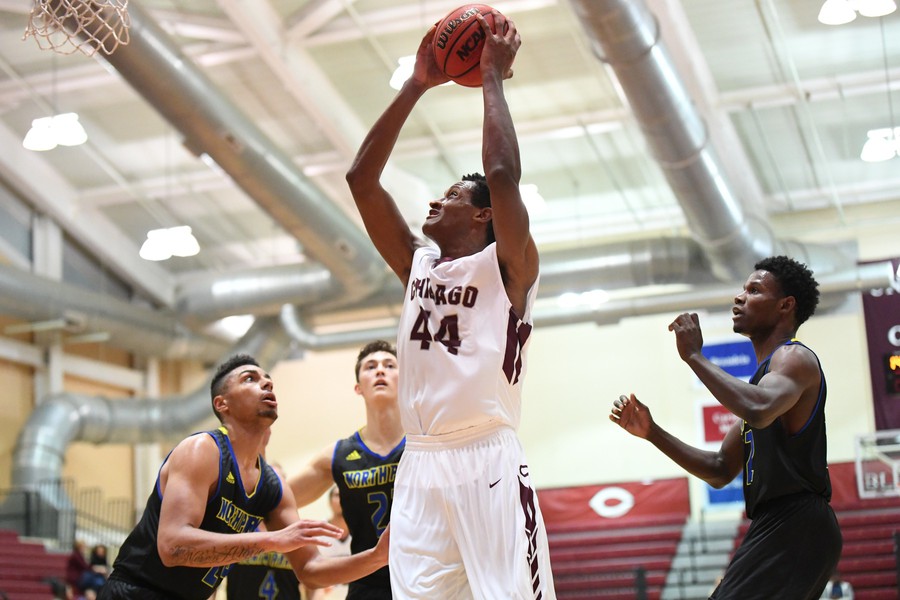 Blaine Crawford takes the ball to the hoop against three opponents earlier this year.

The University of Chicago men’s basketball team (16–9 overall, 8–6 conference) was lead by an impressive group of seniors, and among them was First Team All–UAA selection Blaine Crawford, who started at the center position for the Maroons. Crawford, known for his competitiveness on the court and friendliness off of it, dominated his competitors this year en route to posting averages of 15 points and 9.5 rebounds per game, both tops on the team.

Crawford will graduate with the second highest season field goal percentage (61.7 percent) in Maroon history, as well as having the eighth highest free throw (103) and ninth highest rebound (229) season totals in team history, dating back more than 100 years.

“Blaine’s experience and developed skill set inside and out made our team so much more deadly than if we didn’t have him,” second-year guard Noah Karras said. “His hard work and hustle rubbed off on all of us. He was a great teammate to look after and follow. With his dominating presence underneath, that created lots of open looks and scoring opportunities for outside threats like Jake [Fenlon] and myself.”

First-year center Sam Sustacek spent the year playing behind and learning from Crawford. “Blaine was a great mentor to have for my first year on the team,” Sustacek said of the center. “He is a tough player to guard, and I was definitely baptized by fire. I grew as a player trying to stop him in practice, and I got a lot tougher. He never took it easy on me, and in the long run, I’ve gotten better from it.”

The Maroons won 64 games in the four years Crawford played for them. After seeing limited action as a first-year, Crawford played steady minutes off the bench as a second- and third-year behind incumbent starter Nate Brooks before breaking out as a regular starter his fourth year. A double-double machine, Crawford put up double digits in points and rebounds 11 times in his 24 appearances this season, as well as dropping at least 20 points six different times this year.

Among Crawford’s many accolades this season was being named the UChicago Tournament MVP and the UAA Athlete of the week on two separate occasions.

A political science major, the 6’8” Crawford is originally from St. Paul, MN. He will return home after graduation to work for Accenture, a global management consulting and professional services company.

Crawford is beloved and respected by his teammates in what is a very close-knit locker room. “He’s friends with everyone on the team,” Karras said. “Everyone enjoys hanging out with him. He’s very knowledgeable and intelligent so he generates lots of conversations with a variety of topics.”

“He was definitely our motor,” Sustacek added. “He came to every game and produced and shot a high percentage that helped us to our successes. He’s a great friend, endearingly nicknamed ‘Guwop’ by the team, and someone we’re really going to miss having around next year.”