By the Book: Brooker Prizewinners Discuss Their Collections 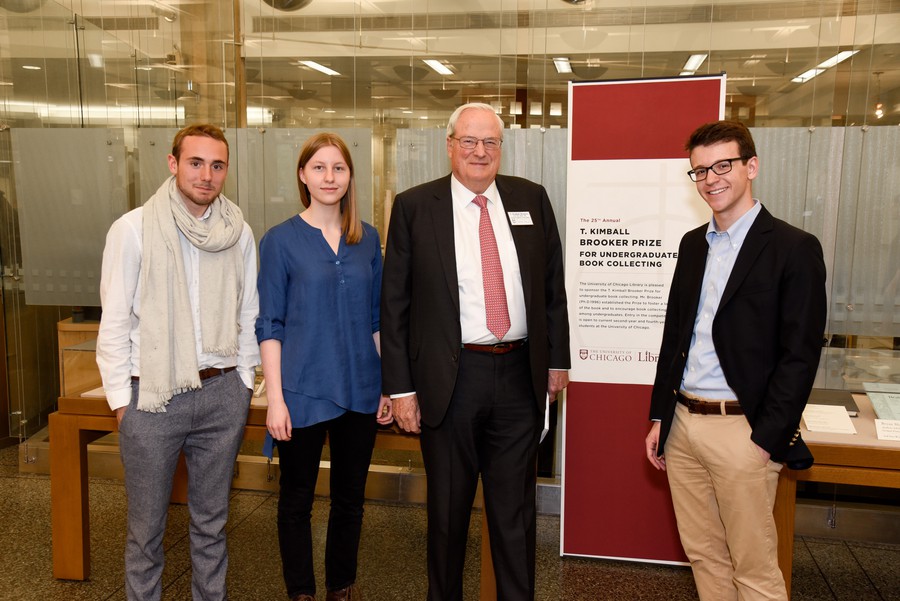 By Ivan Ost   and Chloé Bardin

This year’s Brooker Prize, awarded annually to second- and fourth-year students possessing an outstanding themed collection of books, actually went to a fourth-year and two second-years. The Maroon sat down with each of the three winners this week to learn a little more about their exceptional collections.

When I picked books to send in for this collection, I had to choose five that I’m not currently playing. This is a collection of music I actually play. It began by accident when I started collecting the books I was playing as a kid, and it gradually became clear that I wanted to create a library for myself. That’s how I got started collecting German piano music; I just collected the music I wanted to play because I have an—I  don’t know what the right word is—interest? fetish? for German music. Though it’s actually not my favorite kind of music. I really love vocal music. But I can’t sing. So I’m forced to play the piano.

It takes years, though, to make a collection like this. I’ve owned some of these books since I was seven years old. One thing that can be hard, but that I was lucky enough to receive good advice on, is buying the right editions. Editions are really important when you’re collecting, or studying or writing or playing. It often comes down to publisher—if Henle puts out a new edition of Rachmaninoff, for example, I’ll go find that. It’s about really having a full complement of the canon of German music, from Bach through people like Prokofiev, who weren’t themselves German but who were heavily influenced by German styles. There’s plenty more I’m looking for. Henle is publishing a new edition of Bartók, for example. There’ve been some really awful editions published that I can’t stand. You can tell I’m a real nerd about this kind of stuff.

About half of my music is in Massachusetts right now. I had an especially hard time choosing what to bring to Chicago. All of these books travel with me so I can have access to all the little details [notes, marginalia] that go with them. This is different than, say, a novel, where you don’t always need to reference the tiny facts about measure length or rests.

I keep buying more books, too. In every city I’ve lived, I have my favorite music store. I’m also signed up for newsletters from big publishers. I’ll also hear a piece I really like and think, ‘I’d like to have that book.’ This means I’ve probably spent thousands of dollars over the last 15 years. The Beethoven sonatas are $50—but they’re printed in Germany! On decent paper! I got those as my birthday present when I was 12.

I don’t always advertise my collection, though. My status as a musician is more well advertised than the collection itself. In a way my collection is primary, and in a way, it’s not. It’s primary in that I think really hard about what I want next and where I’ll go to get it. But it’s also not primary in that the collection is only really there to serve my practical needs: All of my teachers have had collections similar to mine, which are much larger and more impressive. My teachers’ larger and more impressive collections actually inspired me to collect in the first place.

I think I’ve come up with something pretty good, though. I like these books—they’re pretty things. I think that I’ve invested the amount of energy and money that I have says I’m very serious about my music. My collection also says that I really, really like German piano music.

My collection is centered around Patrick O’Brian and C.S. Forester and their works of naval fiction. When I first read Patrick O’Brian’s Master and Commander, I ran into this brick wall of naval jargon. I had no idea what I was doing, and no idea what I was reading. But instead of putting the book down, I went to the library and started checking out encyclopedias, firsthand accounts by sailors, and other books that I hoped could help me figure out the naval language. That turned into this nest I acquired of 18th and 19th century naval books, mostly by sailors and war veterans, which made it easier to read the fiction. The result is my collection, which is comprised of fiction, firsthand accounts, and nonfiction about Age of Sail and the Napoleonic Wars.

I started reading O’Brian when I was teenager, but growing up my grandfather read me C.S. Forester. He was a fighter pilot in World War II and loved these books, and saw his work as an extension of the work navigators would do on ships. He’d read me the stories and leave out the boring bits and include what he thought was the exciting stuff.

All the books in my collection, with the exception of a couple that belonged to my grandpa or my dad, I got at used book sales and library clearance events. I have a list of books that I’ve been looking for—I have almost all the Patrick O’Brian books, all the ones about Captain Jack Aubrey, a fictional character that combines a number of historical naval figures, but O’Brian wrote other books from that series that I’m still looking for. I have an Excel spreadsheet at home that I maintain with books I want.

I do think my collection will keep growing. A lot of older book collectors become choosier with time. Maybe I’ll start narrowing it down, or look for all first editions or a whole run where I like the cover art.

As things stand right now, most people never learn that I have these books. I’m a geophysical science major, so people don’t really think to ask, and there’s a very limited amount of time people will listen to someone talk about historical naval fiction. But I do find that people are interested in the books in the overarching field of science and fieldwork. A lot of the O’Brian books catalog a history of scientists and doctors trying to conduct research while on military expeditions. Those are centered around real historical figures like Sir Joseph Banks and other members of the prominent British scientific community.

Even now, I still have plenty to learn about the naval world. I’m not a sailor myself. I grew up on the Chesapeake Bay, so I saw a lot of small craft and tall ships, but I would love the opportunity to get some practical experience.

Unlike many other Brooker Prize winners, I started my collection only one year ago. It grew out of a research project for my BA thesis in Germanic studies. A year later, I got to own at least one third of Raoul Heinrich Francé’s works. Francé is a forgotten biologist and cultural philosopher born in Vienna in the 1870s and who later lived in Munich. His work was widely read by middle and upper class families across Germany during the 1920s and the early ’30s. My collection attempts to revive this historical figure and hopefully bring him back in academia.

I was first introduced to Raoul Francé’s work a year ago in a class on literature and art in Germany around 1900. He was on the syllabus, but we never got to read him in class—we didn’t have time nor an English translation available. I was intrigued both by the figure of the author—my teacher discovered him in the footnote of an article—and by the title on the syllabus: Plants as Inventors. Luckily, the Crerar Library had a copy, in one of the obscure stacks of the basement. After reading it, I wanted to know more about Francé, but very few things were written on him. So, I started my own library, collecting his works scattered around the world. I ordered books online from antique dealers, requested some through the Interlibrary loan and asked for scanned copies of certain volumes. At that point, I also received a research grant to go to Germany and Austria and gather more material. I searched antique shops and in bargain bins for whatever I could find on him. And I ultimately did find some of his books in there for a few Euros.

I didn’t put those archives on a pedestal though. On the contrary, I treated them as tools. My collection is first of all a functional one. I used all the books I gathered for various research projects, a conference paper and my BA thesis. I was not afraid to write in them. There is one book in particular—a pocket edition of Francé’s philosophical Doctrine of Life—that I took everywhere with me. I read them to the point that his language shaped my writing in German. They became part of my life, as I left my mark on them.

I hope I will be able to continue to expand my collection, and the Brooker Prize will help me acquire some rare originals and postcards he wrote. I would like to believe that my work is the first stem of a new field and that some people will become as fascinated as I am. As of now, after working a lot on the topic, I need to take some distance from it. Next year, I will be teaching English in Austria. I am leaving my collection here, at the German department library, hoping that someone will eventually need it. But I know I will get back to it because I think it is worth bringing him back to life, for the historical figure he was.