The University and GSU are currently engaged in a legal dispute over whether graduate students should be recognized as workers under the National Labor Relations Act.

By Rachana Muppa   and Tyrone Lomax 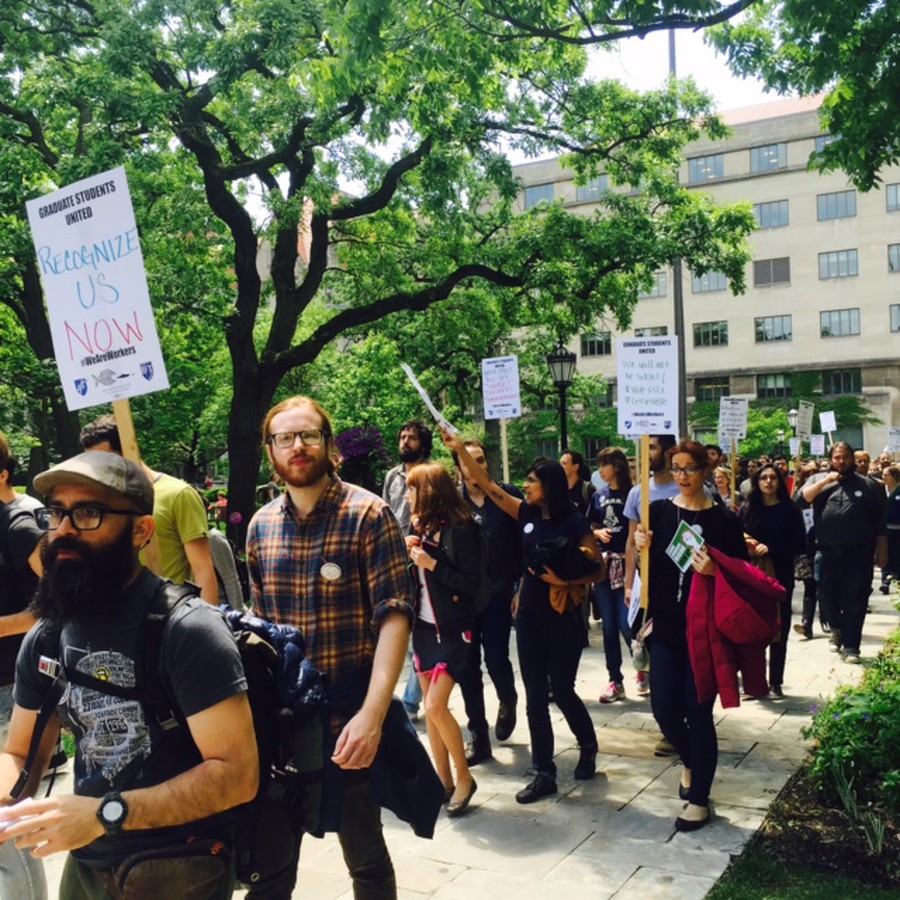 Students gathered on the quad Thursday afternoon in support of Graduate Students United (GSU) in an attempt to persuade administrators to voluntarily recognize GSU as a union without the need for a formal vote.

Faculty and students rallied with signs and buttons to listen to GSU members and allies talk about the shortcomings of current graduate student conditions and the need for GSU’s official recognition under the National Labor Relations Board (NLRB). According to GSU's count, 250-300 people attended the rally.

A GSU member named Clara, who asked The Maroon to refrain from using her last name, was excited by turnout. “The solidarity speakers and all our graduate speakers did a fantastic job of communicating why this is important and why we’re going to keep fighting for union even as the University tries to block our efforts to do that,” she said.

According to union supporters, delays in the unionization process increase the likelihood that appointees to the NLRB by President Donald Trump will reverse an Obama-era decision that recognized graduate students as workers at Columbia University under the National Labor Relations Act (NLRA).

GSU organizer Claudio Sansone argued, “The administration lawyers have been delaying as much as possible. They’ve been calling many witnesses and belittling the witness with simple questions just to take up time, putting people under a lot of pressure.”

According to Sansone, University lawyers still have at least four or five days to call their dean and faculty witnesses before GSU could bring forth their own. “We want to give [the University] another chance to recognize us without a vote if they can trust the number of people they see out here today,” he said.

Will Kong, an organizer who spoke at the event, pointed to the current state of graduate health care as a problem that could be solved by unionization.

“Graduate students pay 5,000 dollars every year, which is roughly a fourth to a fifth of our annual income. With a union, we would be able to reduce that to maybe [3,000]. Maybe get a plan that has a zero-dollar deductible so we’re not paying 5,000 dollars for the privilege of paying another fucking 500 dollars to get healthcare,” Kong said.

The morning of the rally, Dean of Students in the University Michele Rasmussen sent an e-mail to graduate students and faculty, stating that the ongoing hearings were “proceeding fairly, with serious arguments and testimony.” She reaffirmed the University’s position that graduate students are primarily students, and that teaching is part of fulfilling a degree requirement.

Rasmussen’s e-mail supplied legal documents relevant to the University’s current case with GSU in response to student requests. According to the e-mail, the documents are intended to supply graduate students with more information so that they form unbiased opinions about unionizing. The email also claimed that union supporters “distorted the testimonies and substantive cases being presented”, which necessitated balanced discourse.

In response to the GSU rally and alleged distortions Manier stated that “…it is important to consider [forming a labor union] carefully through lawful NLRB processes and reasoned discussion on campus,” he said. “Such discourse cannot be thoroughly conveyed through 140-character tweets, some of which purport to summarize detailed and extensive testimony on the academic development of graduate students.”

The legal dispute between the University and GSU is over whether graduate students should be recognized as workers under the NLRA. The ongoing court hearings will determine if GSU members will conduct a unionization election. If the election were to receive a majority of supporting votes, GSU would gain official recognition under the NLRB, granting their members legal representation against the University.

The University has challenged which students GSU seeks to represent—saying, for instance, that students pursuing master’s degrees should not be included—and the time and manner of the election, which the University says should be postponed until September when students return to campus if an election cannot be completed by May 31.

The original version of this article stated that NLRB recognition would grant GSU third-party legal representation against the University if worker maltreatment occurs. In fact, this representation would come from a member-driven organization rather than a third party. It would apply not only to cases of maltreatment but to improvements in wages, benefits, and working conditions.