Imani Winds Breathes Vitality to the Legacy of Gwendolyn Brooks 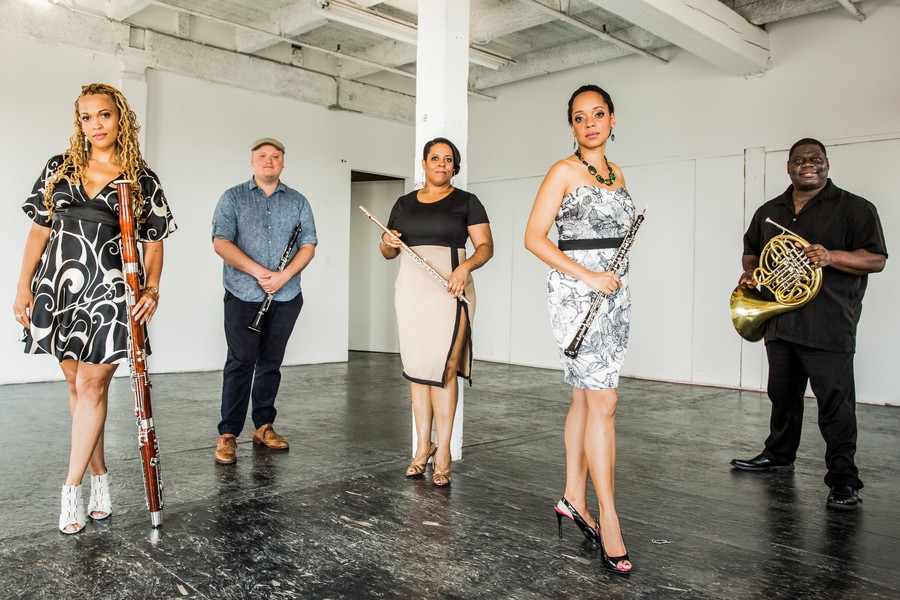 For its last performance of the season, the group drew from a wide range of genres and the works of several black composers—two of them in the ensemble (Valerie Coleman and Jeff Scott), and a third in the audience (Courtney Bryan). “We wanted to walk into Brooks’s shoes and highlight the talent of African-American artists,” explained flautist Valerie Coleman during the pre-concert talk with Travis Jackson, an associate professor of music and humanities at the University. “Tonight, we would like to follow Brooks’s example in celebrating our heroes and sheroes,” bassoonist Monica Ellis added.

The first half of the concert was conceived as pieces that Brooks herself would have enjoyed. French horn Jeff Scott opened the concert with his piece, Titilayo: One heard echoed in the music a line by Brooks, “I am essentially African.” Titilayo featured the clarinet interacting with the rest of the quintet in call and response, a form characteristic of Yoruba music. This dynamic and joyful piece also made for a perfect introduction to Imani Winds. It demonstrated their impressive symbiosis and mastery of rhythm: As a quintet, they are wholly self-conducting.

The second piece continued Brooks’s project to celebrate the great names of black history and culture. Coleman drew from the life of pioneering black entertainer Josephine Baker in her four-part suite Portraits of Josephine. The music reenacted Baker’s rise to fame: long plaintive notes from the French horn shadowed her exit from St. Louis blues in 1920; fast, flickering notes marked her entrance into the Parisian jazz scene and the heyday of the Charleston in 1925. Between those two movements, “Les Milandes” spun a more melancholic tune, in which we could hear Baker’s longing for a home.

The quintet moved away from narrative pieces with Terra Incognita, a contemporary jazz piece by Wayne Shorter. “When we received it, a decade ago, it clearly marked a turning point for us,” Ellis told me after the concert. “Wayne let us completely free as to how to interpret his music: He didn’t put any tempo markings on the score!... It has forced us to listen to one another, to our different understandings and interpretations of the music.”

Jason Moran’s Cane also embodied liberation, albeit in a more literal way. Commissioned by Imani Winds, his four-movement piece tells the story of his ancestor Marie-Thérèse Coincoin, who was brought from Togo to Louisiana as a slave. After receiving her freedom, she continued to fight for that of her children still under slavery. Moving from brusque staccatti symbolizing the violence of deportation to static melodies invoking the routine monotony of plantation life, the piece climaxes in a joyful, aggressive celebration of freedom. It ends in a more contemporary jazz idiom, a tribute to a past that continues to shape the present. The deafening silence of the audience between movements highlighted the gravity of the story being told. In this sense, the second half of the concert transitioned from a continuation of Brooks’s poetic ambition and project to the poet herself, her writing, and her voice.

The concert ended with two world premieres, composed for the occasion and inspired by Brooks’s poems. With Blooming, Courtney Bryan was inspired by the last lines of Brooks’s “The Second Sermon on the Warpland”: “It is lonesome, yes. For we are the last of the loud./ Nevertheless, live./ Conduct your blooming in the noise and whip of the whirlwind.” The piece begins as a violent cacophony, with contradicting, independent melodies. Built on ascendancy, the piece rises from noise to harmony, from quiet to loud in an impressive final crescendo. And the quintet yielded a delightfully delicate interpretation, conveying a softness full of dignity, perfectly translating Brooks’s line.

Coleman’s last piece, a sextet for winds and piano titled Bronzeville, arose from a year-long exploration of Gwendolyn Brooks. “I was inspired by the rhythm of her voice and the pictures of Bronzeville. I wanted to let the poems speak for themselves, to let Gwendolyn speak,” Coleman said. “It also gave me the opportunity to experiment with rhythms from other languages, such as Morse code, which fascinates me.” She asked each musician to tap the three words on which she built her composition in Morse code: “sister,” “Bronzeville,” and “God.” These words as rhythms dissolved into music woven tightly together with Brooks’s poetry, read aloud by the musicians, carried over by the different voices of the musicians. The third and final poem, “We Real Cool,” was my favorite part of the performance. A recording of Brooks reading her own poem played before the music: It was obvious that the performance fed on this voice. The word “we” was repeated in the barest whisper, circulating among the group, uttered by a different person each time. Music and voices crescendoed until the last phrase “We/ Die soon” scored to the dramatic descent of the piano.

“Our job as musicians,” Ellis said, “is to bring a piece of music to life, to joy and beauty. And it wasn’t hard because the music was good and the inspiration behind it was powerful: It was no one else than Gwendolyn Brooks.”