Graduate Students United announced that it filed for unionization at a rally on the Quad. 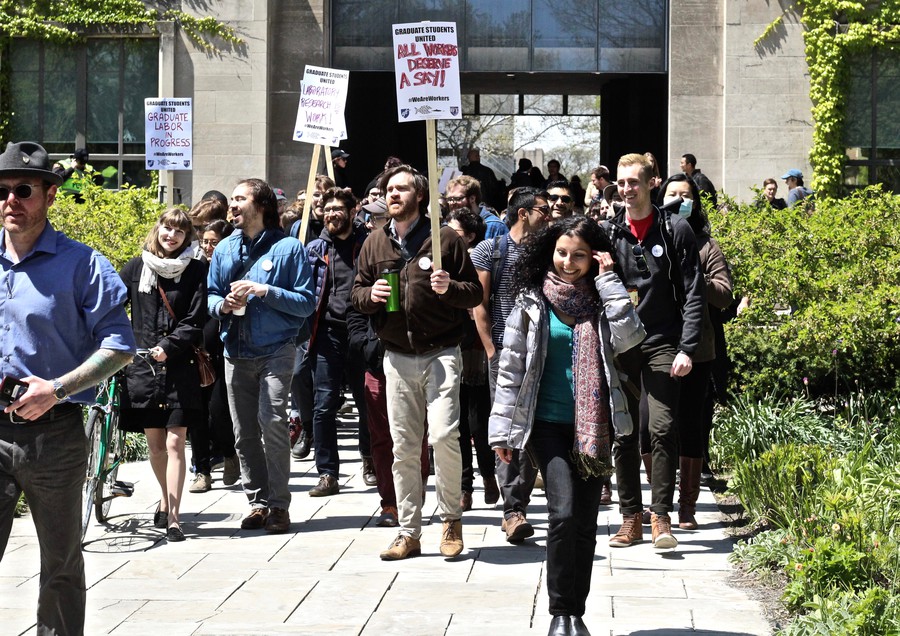 Graduate Students United members rally on the Quad in May 2017.

In an event around noon at the main quad yesterday, GSU announced that they filed a petition for official recognition early Monday morning. Shortly after the rally, a small number of members went to deliver the group’s signature cards to a regional NLRB office.

Amanda Shubert, a GSU department organizer, expressed enthusiasm for GSU’s filing at the rally. “We’re really excited to say we just filed for a union election for graduate employees at UChicago,” she said. “Graduate employees perform essential work and are really the backbone of UChicago.”

In addition, a letter of voluntary recognition was submitted to Edward H. Levi Hall, the University’s main administration building. With the letter, the University could officially recognize GSU as a union without an election being held by GSU members. Although this method is not that common among newly formed unions, letters of voluntary recognition can be used to form an officially recognized union.

GSU points to increases in graduate students’ stipends and teaching remuneration, and expanded health care coverage and childcare grants as accomplishments of their campaigns. People skeptical of graduate student unionization have disputed this characterization. If they are officially recognized, GSU says they will be able to more effectively bargain with the University.

GSU’s current aims center on increasing graduate student representation to the University, improving the current conditions of working graduates, and placing more stringent protections in place for those who need to file grievances.

The election to determine GSU’s unionization is expected to occur in late June.

Meanwhile, UChicago’s SLEU filed a petition to the NLRB for union recognition Sunday. Composed of roughly 175 members, most of them undergraduates, SLEU is one of the first unions in the country from a private university to do so.

If approved by the NLRB, the petition will determine the date of a future election that will certify SLEU’s official recognition. With recognition, SLEU members aim to negotiate for higher wages, increased control over working hours, and third-party representation in cases of Title IX, ADA, or labor violations.

SLEU is currently working with another local Illinois union, Teamsters Local 743. SLEU represents the experiences of students working from libraries across campus. Despite the diversity of members’ working environments, all of them share certain similar experiences, according to third-year and SLEU co-coordinator Michael Weinrib.

“Certain departments face more difficult challenges with respect to understaffing and hiring freezes, but all student library workers face an impenetrable bureaucracy if they need to file a complaint for Title IX, ADA, or labor violations,” Weinrib wrote in an e-mail to The Maroon.

Additionally, current wages have often required library workers to choose between work and education, Weinrib said. The benefits of gaining recognition could restore the balance between these aspects of library workers’ lives, allowing students to worry less about working 20 hours a week and re-engage in campus life.

These sentiments encouraged SLEU’s founding in fall 2016. Since then, knowledge of the union remained between the students involved in order to avoid administrative interference, according to Weinrib. This was in part a reaction to an August 2016 statement released by the administration critical of graduate unionizing.

Weinrib expressed confidence in the possibility that SLEU will gain official recognition, as well as the benefits such recognition can provide. “We believe that through collective bargaining student workers will be better able to win higher wages and better working conditions that will allow them to prioritize their academic work over their jobs in the library,” he said.

This article misstated that the SLEU petition was filed on Monday. It was filed Sunday.

This article has been changed to reflect the public dispute between GSU and graduate student unionization opponents over the impact of GSU campaigns.

The University is also challenging a related ruling by the National Labor Relations Board in a case involving Columbia University.