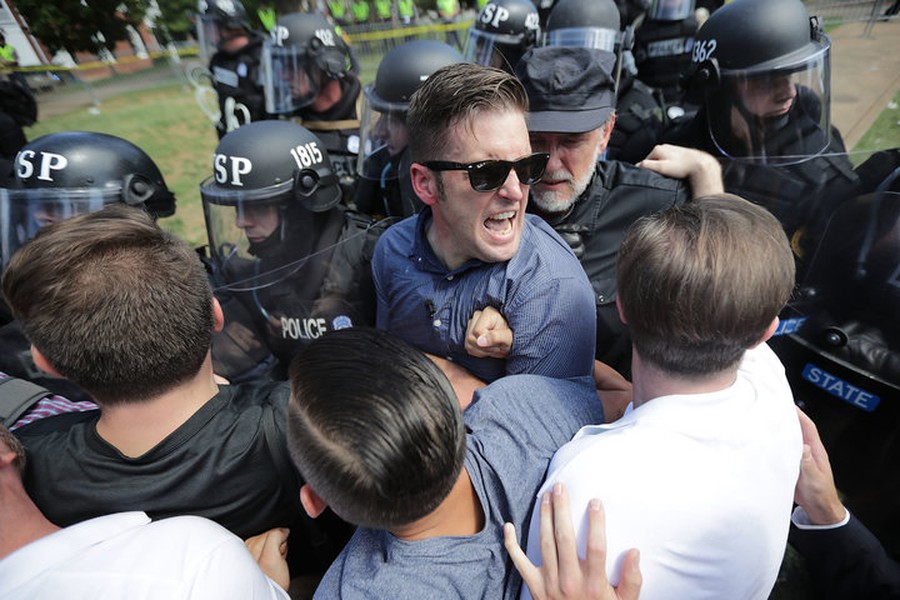 Free speech scholar and Law School professor Geoffrey Stone turned down neo-Nazi Richard Spencer’s request to come to campus after Spencer expressed interest in returning to the University of Chicago campus according to an e-mail exchange Stone released on Sunday.

Stone released the e-mails the day following the white nationalist rally in Charlottesville that turned deadly when a man apparently affiliated with the rally drove a car into a crowd of counter-protesters. At the rally, Spencer (A.M. ’03)—a leader of the white nationalist movement and coiner of the term “alt-right”—was pepper-sprayed and arrested by the police.

Spencer has referred to the media as the lügenpresse, a pejorative term, commonly used in Nazi Germany, meaning “lying press,” and has used the German phrase “Heil Trump.”

In an April 18 op-ed in the New York Times, Stone defended Spencer’s First Amendment right to speak at Auburn University.

According to Stone, he received an e-mail from Spencer thanking him for his piece saying, “[he thinks] it will be looked back upon as significant in changing the contemporary free-speech debate.”

In the e-mail, Spencer also expressed his desire to return to his alma mater for a speaking event.

“I’m eager to return to campus, particularly [because the University has made clear that it] will not be a ‘safe space,’ in the sense of protecting students from dangerous ideas.

“In this line, would you be interested in engaging me on campus, or sponsoring an event at which I speak? This could take many forms: a formal debate (probably my least favorite idea), a discussion with you or another professor, or a speech and AMA [Ask Me Anything] with the student body.”

At the University of Chicago, Spencer’s thesis was an analysis of German philosopher Theodor Adorno. Spencer argued that “Adorno was afraid to admit how much he loved the music of Wagner because Wagner was an anti-Semite championed by the Nazis,” according to a Mother Jones profile of Spencer.

Stone wrote back, saying that he thought Spencer’s views were not worth discussing, and that he would not extend him an invitation.

“My strong support for the right of students and faculty to invite speakers to campus to address whatever views they think worth discussing does not mean that I personally think that all views are worth discussing. From what I have seen of your views, they do not seem to me at add anything of value to serious and reasoned discourse, which is of course the central goal of a university. Thus, although I would defend the right of others to invite you to speak, I don’t see any reason for me to encourage or to endorse such an event.”

Stone added that although he does not plan on inviting Spencer, if another member of the University chooses to, he would defend Spencer’s right to speak on campus.

"Faculty and students invite all sorts of people, and we don’t restrict who they invite.”