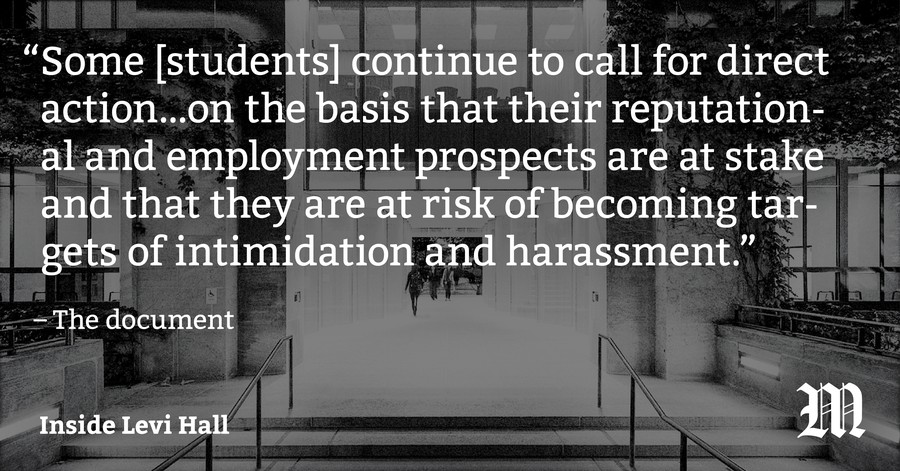 This article was based on a set of internal administration documents given to The Maroon last month. More information on these documents can be found here.

University administrators weighed the pros and cons of taking a more assertive stance against groups that targeted student activists who have advocated for divestment from Israel, according to an administrative memo.

Students placed on an online “watch list” maintained by a website called Canary Mission have requested that the University take action on their behalf, but the University believes that any action it could take would be unlikely to result in the postings being taken down and would risk attracting more attention to those targeted.

Another organization, the David Horowitz Freedom Center—which claims to “combat the efforts of the radical left and its Islamist allies”—has twice claimed responsibility for a series of posters placed around campus last school year that targeted several students involved in Jewish Voice for Peace (JVP), Students for Justice in Palestine (SJP), the Muslim Students Association (MSA), and UofC Divest. In the past, some members of these groups have called on the University to divest from a set of companies on the grounds that they were complicit in human rights abuses in Palestine.

The content and personal information on the posters were taken from Canary Mission’s “watch list,” which similarly targets what it claims are “people and groups that are promoting hatred of the USA, Israel and Jews on college campuses in North America.”

The University responded to the first round of posters in the fall by removing them from bulletin boards and through “personalized outreach to the affected students by the dean of students in the University [Michele Rasmussen],” according to the memo. However, Rasmussen informed the students that any “direct action” by the University would be unlikely to have an effect.

Written on official University letterhead and dated June 25, 2017, the two-page document notes that students again requested that the University take action after similar posters were put up by the Horowitz Freedom Center in the spring. The document does not disclose a final course of action and appears to be a preliminary memo summarizing developments in the incident thus far.

However, the document lists three options to consider, should students and RSOs request intervention in the future: issuing a public condemnation of groups that harass students by name, like the Horowitz Freedom Center and Canary Mission; contacting these groups directly to request the removal of University students’ information; and providing students with legal guidance to take individual action.

A footnote to the first option notes that David Horowitz threatened legal action against UCLA when Vice Chancellor for Equity, Diversity and Inclusion Jerry Kang publicly condemned the Center following a similar incident.

The document also says that the University’s range of responses is broad and need not be limited to the three described.

“There are pros and cons to each of these options, which could be explored in further discussion with Legal and Communications,” it concludes.

When asked whether the University had proceeded with any of these options, the University of Chicago News Office declined to comment. Students listed on the Canary Mission’s watchlist—who responded on the condition of anonymity—either reported no substantial developments since the memo or refused to comment by press time.

In public statements—such as the May 15 e-mail sent to the University community by Rasmussen and Provost Daniel Diermeier—the University has refrained from condemning the Horowitz Freedom Center or Canary Mission by name or directly requesting the removal of the information from online watch lists. The University called both sets of posters defamatory and inconsistent with University values.

“Some [students] continue to call for direct action…on the basis that their reputational and employment prospects are at stake and that they are at risk of becoming targets of intimidation and harassment,” the report notes.

In the document, the University cites “two relatively high-profile situations that both occurred in the fall of 2014” as cases in which its requests for the removal of damaging content online were ignored. According to the report, the Office of Legal Counsel (OLC) and the University of Chicago Police Department reached out to law enforcement, Tumblr, geocities.com, and Facebook.

“Requests from the University’s Office of Legal Counsel…were generally not successful and it was only after significant effort that one of them (geocities.org [sic]) complied,” the document reports.

According to the document, Rasmussen told affected students that “requests on their behalf from the University were unlikely to have any effect and might, in fact, bring more unwanted attention to them.”