Subscribe here to receive the Maroon Newsletter in your email inbox.

NLRB: Grad students can vote on union. Following a hearing before the National Labor Relations Board in May, the NLRB ruled yesterday that Graduate Students may hold an election to determine if they will unionize. The vote will take place on October 17 and 18, and will be open to all graduate students who received compensation in at least one quarter since Autumn 2016.

An election would be, in all likelihood, only the beginning. In a related case, the University has asked the NLRB to reconsider its decision to allow student library workers to form a union, after they voted to do so in June. A Trump-era NLRB might be inclined to revisit the decision last August that allowed student workers at private universities to unionize—University briefs in both cases have suggested that that decision should be overturned.

Governor Bruce Rauner spoke at University of Chicago Medicine yesterday where he signed a measure that will lower the age minimum age for being an organ and tissue donor to 16 years. 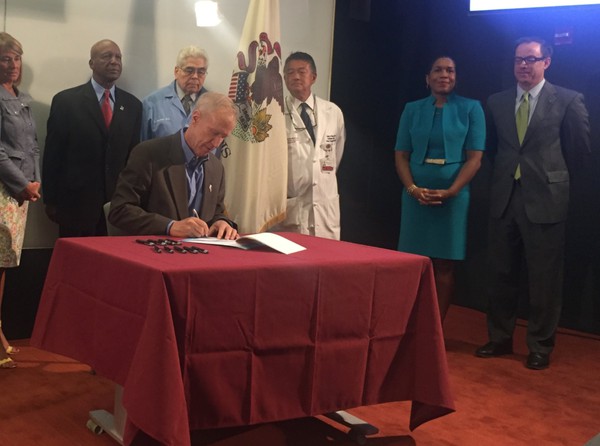 DNAInfo created an interactive map of changes coming to Jackson Park related to the Obama presidential center and the Tiger Woods golf course.

Events: An exhibition of oral histories and art pieces reflecting on the impact of Hurricane Matthew on Haiti opens Friday, 6–9 p.m., at the Haitian American Museum of Chicago. Members of the University of Chicago history department helped put the exhibit together. See more at chicagomaroon.com/events.

UofC Medicine dropped Medicaid insurance provider Illinicare this week, leaving 8,000 (by the University’s estimate) to 4,000 (by IlliniCare’s) low-income patients to either switch to another insurer or find another health-care provider. The hospital serves an unusually large number of patients covered by Medicaid, and compensation through Illinois’s already stingy program has been further complicated by the state’s rolling budget crises.

Work began this week to remove the free-standing arch in front of Crerar Library, part of a broader process of opening up the brutalist building.