The University in the Age of Trump

The effects of President Trump's policies and politics on campus. 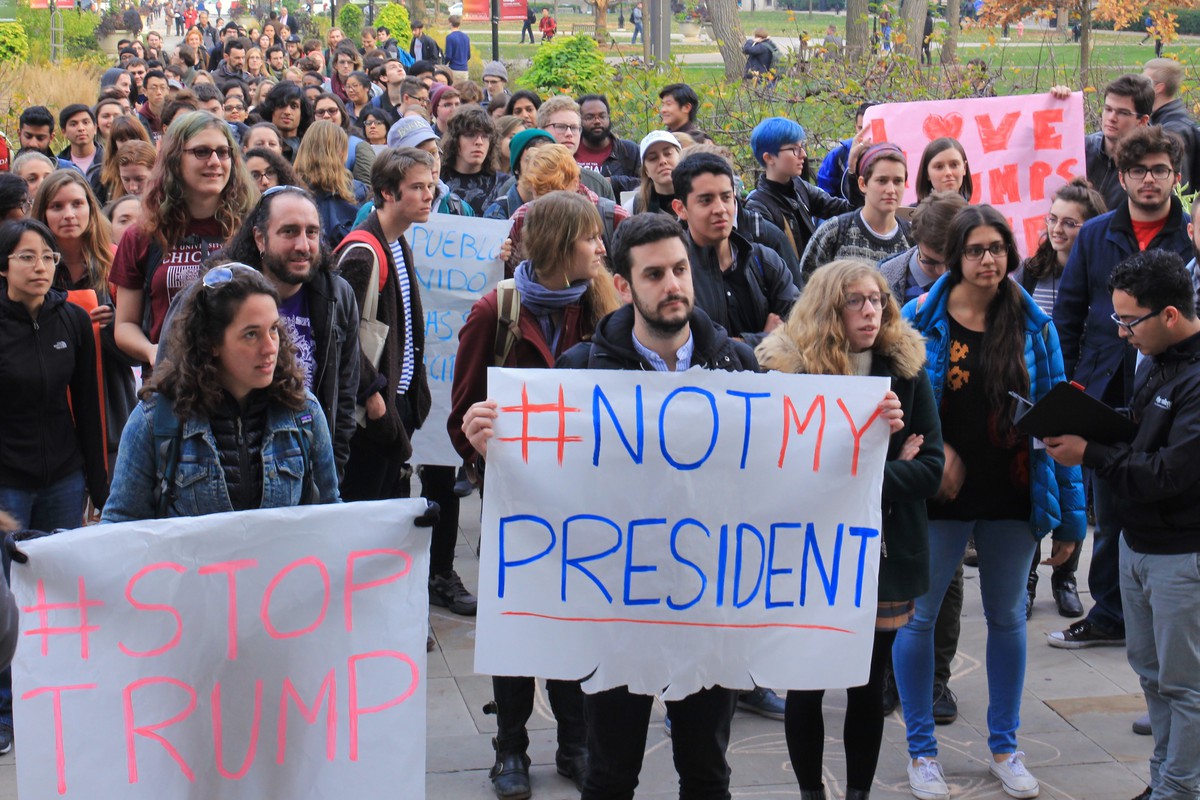 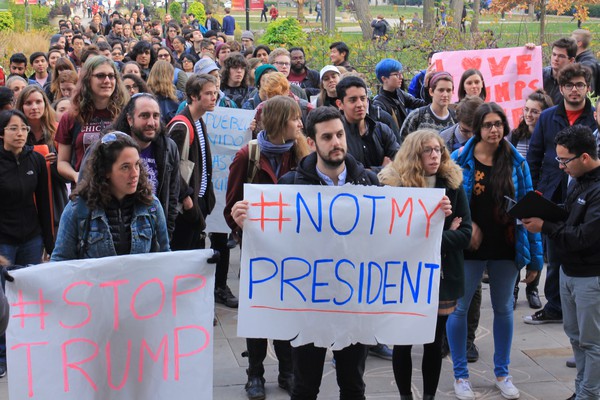 In the early hours of November 9, 2016, nearly 300 students gathered on the quad. There they let forth a collective “primal scream,” then lit a Trump banner on fire to the tune of rapper YG’s song “Fuck Donald Trump.” It was, according to one of the event’s participants, a “cathartic” response to Donald Trump’s election as president of the United States.

Eventually the flames died down, but in the days and months that followed, campus responses to the election multiplied quickly. Students planned walkouts and protests, while professors published op-eds and statements. A professor left his sabbatical early to teach a winter quarter course on the American presidency.

Sean Spicer spoke at Ida Noyes two weeks before the inauguration, but not before a student was called into the dean of students’s office for vowing to “projectile vomit” on Trump’s incoming press secretary.

In the eight months since the election, Trump-era policies and politics have had significant effects on campus, eliciting responses from the administration and other campus groups.

Two days after Trump issued an executive order banning entry to the U.S. from seven Muslim majority countries for 90 days, University president Robert J. Zimmer sent out a campus-wide response in support of international students, faculty and staff. Such restrictions, he argued, “damage the University’s capacity to fulfill its highest aspirations in research, education, and impact.”

On February 13, after the ban was temporarily blocked in court, the University jointly filed an amicus brief with 16 other universities, claiming that the executive order impeded universities’ abilities to “educate future leaders from nearly every continent.” Zimmer and Provost Daniel Diermeier also sent Trump a letter emphasizing the importance of allowing immigrants into the country. The University filed an updated brief with 30 other schools in early April.

The ban elicited responses from students and professors as well. More than 120 faculty members, including four Nobel laureates, signed a petition deeming the executive order “inhumane” and “un-American.” College Council (CC), the undergraduate Student Government body, passed a resolution before Trump’s term began, recommending the creation of a sanctuary campus—that is, one that would prohibit immigration enforcement officials from entering campus without a warrant. (The University is avoiding the term “sanctuary.”) In March, CC passed an “emergency fund” resolution, prioritizing immigration-related applications for receipt of the fund.

The executive order proved particularly consequential for the University’s Oriental Institute, which carries out projects across the Middle East, and hosts archaeologists from around the world. Director Gil Stein told The Maroon in February that the order was “a disaster for [the Oriental Institute’s] research” and that “we have to think of ways around it.”

In contrast to the University’s joint response to the travel ban, UChicago took an independent route when Trump pulled out of the Paris climate agreement in June. Two hundred colleges signed a petition protesting the president’s withdrawal, but the University of Chicago did not join. It also did not take part in a statement by twelve “Ivy-Plus” schools reaffirming a 2015 climate pledge.

Instead, UChicago released its own statement, alluding to the Paris agreement but refraining from actively endorsing it. Climate-related questions “are fundamentally global in nature with specific local inputs and implications,” the statement read. “This awareness is instantiated in widespread participation in the Paris accords.”

The Maroon obtained an internal University budgetary memo this summer that stated that there is an “existential concern on federal grants” if the Trump administration is able to implement a substantially lower cap on federal government reimbursement rates for Facilities & Administrative (F&A) costs. The document raised concern that such a cap would be financially disastrous for the University, likely due to the fact that its F&A rate for on-campus research hovers around 60 percent, and the Trump administration proposed a 10 percent cap.

Richard Spencer (A.M. ’03) has risen to prominence as a white supremacist leader in the months since Trump’s campaign, and has landed at the heart of the University’s ongoing free speech debates.

The Maroon first asked whether the University would disavow Spencer in late November 2016—after his Dallas high school condemned his views—to which University spokesperson Jeremy Manier responded only that “The views of individuals among 160,000 alumni do not speak for the University.” Manier did not refer directly to Spencer or his white nationalist views at the time.

In February, Zimmer said in an interview with The Wall Street Journal that all speakers invited to campus would be allowed to speak. When asked about Spencer specifically, he responded that “It would be fine if he came to speak, just like if anyone else came to speak.”

After the white nationalist rally in Charlottesville, Virginia made headlines in August, Spencer wrote to Law School professor Geoffrey Stone asking for an invitation to speak on campus. Stone, who has spoken extensively about campus free speech issues and defended Spencer’s right to speak at Auburn University in April, declined. “My strong support for the right of students and faculty to invite speakers to campus…does not mean that I personally think all views are worth discussing…. Thus, although I would defend the right of others to invite you to speak, I don’t see any reason for me to encourage or to endorse such an event,” he told Spencer.

Zimmer addressed the events in Charlottesville in an August 22 e-mail to campus, distancing the University’s relationship with the “freedom of expression” defense espoused at the rally. “It is a travesty to label as free speech the combination of brandished weapons, the killing of an innocent person, threats, and the symbols that represent destruction to so many,” he said in the e-mail. Manier elaborated in an e-mail to *The Maroon*: “Invited speakers who do not engage in threats or violence can speak regardless of the content of their views,” he wrote.

Secretary of Education Betsy DeVos announced on September 7 that the Trump administration will roll back Obama-era guidance on Title IX which required universities receiving federal funding to use a low standard of proof in their handling of campus sexual assault cases.

Dean of Students Michele Rasmussen suggested in an April interview that this would be the case, stating that “It’s the standard we’ve been using now for several years. I don’t really see any compelling reason not to use it.”

In the recent statement, Sainvilus explained that state law mandates similar policies to what the University currently follows. “We will continue to ensure compliance with Title IX and relevant federal regulations,” she wrote. “Another important consideration is the need to work with state offices to ensure compliances with state-level requirements, specifically the Illinois Preventing Sexual Violence in Higher Education Act of 2015, which requires specific processes and standards that are very similar to the guidance supplied previously by the U.S. Department of Education.”

In a campus-wide e-mail, Executive Vice Provost David Nirenberg and Rasmussen explained that Zimmer and Diermeier have “argued strongly” against ending the Deferred Action for Childhood Arrivals (DACA) program, which Trump announced on September 5 that he would terminate. They also sent a letter to the Illinois congressional delegation in support of legislation that would protect the rights of DACA-eligible students and staff. They have written to the White House in support of the program as well. In November, Zimmer wrote to Trump with 300 other college presidents in support of DACA.

In July, Senator Dick Durbin (D-IL) introduced a bill with Senator Lindsey Graham (R-SC) that would revive the DREAM Act, which grants legal status and, unlike DACA, a path to citizenship for undocumented immigrants who were brought to the U.S. as children.

The University declined to support the DREAM Act in 2010, citing the 1967 Kalven Report which recommends that the University avoid taking political stances. Manier maintained this position in an e-mail to The Maroon. “The DREAM Act encompasses issues that do not directly affect the University,” he said.

Kalven in the Age of Trump

In 1967, Harry Kalven Jr. recommended that the University remain politically neutral, arguing that the “university must sustain an extraordinary environment of freedom of inquiry and maintain its independence from political fashions, passions, and pressures.” The University has repeatedly cited what has come to be known as the Kalven Report in its response to political issues ranging from protests to divestment controversies over the last five decades.

A February op-ed in The Maroon argued that Zimmer’s response to Trump’s immigration ban effectively rendered the report null, as, by writing a letter and filing a brief, the University had waded directly into an active political issue.

However, the University’s responses to certain Trump policies suggest that it continues to actively consider the Kalven Report. A Law School professor suggested on Twitter that the Kalven Report is what prohibited the University from joining the coalition of schools explicitly opposing Trump’s withdrawal from the Paris agreement.

Trump’s appointments to two vacant seats on the National Labor Relations Board (NLRB) will swing the board from a Democratic majority to a Republican majority and may reverse Obama-era rulings on student unionization. This includes an August 2016 decision that ruled that graduate students working as teaching and research assistants at Columbia University are employees and therefore able to unionize.

UChicago graduate students may vote on unionization in October. The University has announced its intent to request that the NLRB review the decision, which could stall the election. Graduate Students United (GSU) organizers have argued that delays in the unionization process will increase the likelihood that Trump’s NLRB appointees will reverse the Columbia decision.