A stroll through your new neighborhood in this year's O-Issue. 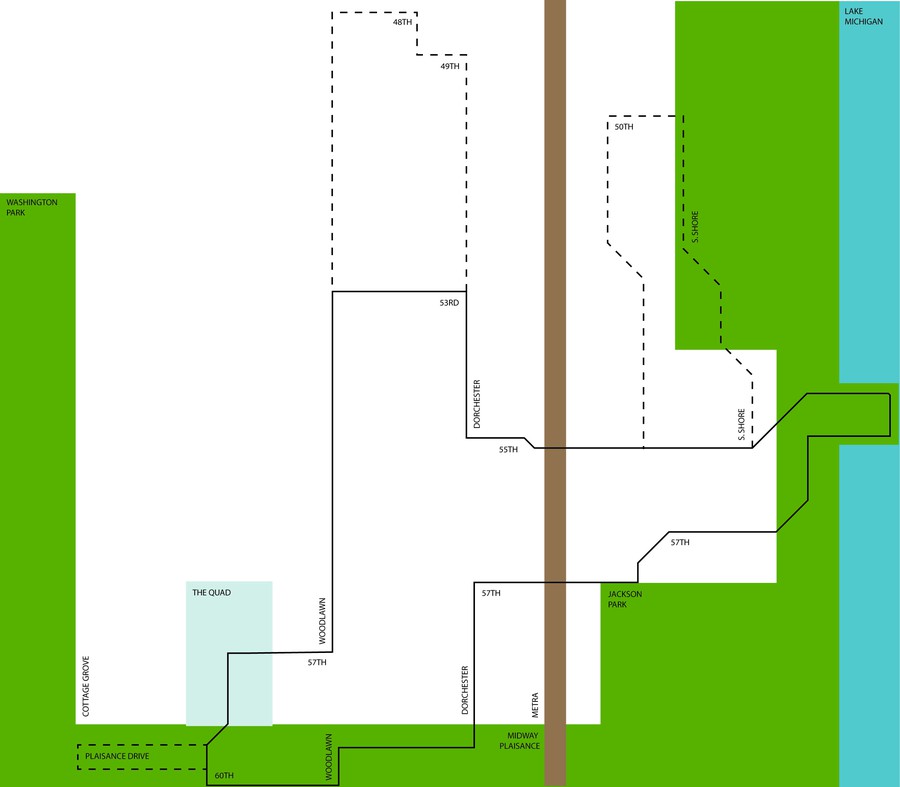 A suggested route through Hyde Park.

There are many different rewarding routes to take while exploring Hyde Park, an exceptionally beautiful neighborhood with a layered history. This particular plan is a suggestion, built on one man’s experience. The whole thing was getting long, so I broke off a couple of diversions for the odd Laredo Taft completionist—those detours are listed at the bottom of the page.

Scene–Campus: Begin on the bisected circular path in the center of the quad. This is the oldest part of campus, and the distillation of the Gothic architectural style that the University built in for more than half a century. To the north, you can see Hull Gate and, beyond it, the brutalist heap that is Regenstein Library. To the south, you can see Harper Library, a center of undergraduate academic life on campus. The western path out of the quad goes through Levi Hall, the central administrative building on campus.

En Route: Move southwest, keeping north of Swift Hall, which houses the Divinity School. Turn south, passing by Cobb Hall and out through the covered walkway between Wieboldt and Classics halls. To your left, you will see the stained glass western exposure of Bond Chapel; to your right, in the corridor between Wieboldt and Classics, you’ll see the only remaining stone from the Old University of Chicago’s Douglas Hall. Cross 59th Street and continue along the path heading southwest till you reach the intersection of South Ellis Avenue and Midway Plaisance. Detour: Fountain of Time. You should be able to see the statue of Carl Linnaeus, the Swedish botanist and nomenclaturist, to your left.

Scene–Midway: The series of parks cradling Hyde Park was laid out, in large part, by Frederick Law Olmsted, the designer of Central Park. In Olmsted’s original vision, the Midway would have hosted a canal connecting the lagoons in Jackson Park and Washington Park, though recurring financial problems always prevented the plan’s full implementation, leaving only the depression through the center of the Midway. During the 1893 World’s Fair, the Midway hosted the fair’s most sensational exhibitions, including the first Ferris wheel. The park forms the border between Hyde Park and Woodlawn.

En Route: Continue south down Ellis Avenue until you cross 60th Street. On the southwest side of the intersection sits Ludwig Mies van der Rohe’s 1965 building for the School of Social Service Administration. Turn and walk east along the southern side of 60th. On your right is Burton-Judson residence hall, the only part of an expansive plan for an undergraduate campus south of 60th Street to be completed before the 1929 crash.

Scene–South Campus: In front of the tall, glass-plated Law School building. The Law School building by Eero Saarinen is the jewel of the University’s South Campus expansion during the ’50s, ’60s and ’70s. The expansion is a source of friction with Woodlawn, whose residents feared that the University would pursue the same aggressive urban renewal strategies that displaced so many people from parts of Hyde Park. Concerted protests and political organizing elicited a commitment from the University not to build south of 61st Street, which held until quite recently. You should also be able to see the Renee Granville-Grossman Residential Commons tucked slightly behind the Law School.

En Route: Continue along 60th Street until you reach Woodlawn Avenue and turn north. Go north along Woodlawn until you are north of the westbound lane of Midway Plaisance drive. You’ll see the imposing Rockefeller Chapel ahead of you at 59th Street and Woodlawn Avenue. Turn east to travel along the tree-lined path between Midway Plaisance Drive and 59th Street. To your left, you will pass Ida Noyes Hall, and then the Laboratory Schools. Turn north at Dorchester Avenue. International House, a dorm building with Gothic and art deco influences. Continue along Dorchester Avenue until you reach 57th Street, then turn and walk west. Once you pass under the Metra tracks, you have entered East Hyde Park. Stay on the path on the south side of 57th Street as it passes through the northern part of Jackson Park and curves around the Museum of Science and Industry.

En Route: Continue on the path north as it lowers into a tunnel beneath 57th Street, and then turn west into another tunnel beneath Lake Shore Drive. As you enter into the lakefront’s Burnham Park, take a left to the north and then follow that path. You should be moving onto a small peninsula jutting into Lake Michigan. This is Promontory Point. Follow the path that leads around the edge of the Point. The limestone rocks that line the edge of the shore were installed to protect the lakefront, which is mostly landfill.

Scene: Looking south, the lakefront stretches out before you: the skyscrapers of East Hyde Park due west, then the Museum of Science and Industry, then the lakefront proper: 57th Street Beach, 63rd Street Beach, Rainbow Beach. A few more skyscrapers mark the northeastern edge of South Shore’s Jackson Park Highlands. In the extreme distance you may be able to see the Indiana Harbor Works, the largest steel mill in the United States, in East Chicago, Indiana. Looking north, you can see Indian Village, a collection of high-rises in the northern extremity of East Hyde Park, and Chicago’s skyline in the distance.

En Route: Complete the circuit of the Point and keep north so that you take another tunnel under Lake Shore Drive and back into East Hyde Park. You should find yourself along 55th Street. Detour: East Hyde Park and Indian Village. Continue along 55th Street as it passes beneath the Metra tracks. To your left, after you’ve passed on to the western side of the Metra tracks, you’ll see a three-story retail building. The building, which was built as a car dealership, is covered in art-deco automobile related motifs.

Scene–Urban Renewal: Along 55th Street between the Metra tracks and Dorchester Avenue. In the ’50s, ’60s, and ’70s, the University channeled millions of state and federal urban renewal dollars into projects trying to keep Hyde Park attractive for academics and prospective students. The project was, by the University’s estimation, successful, turning Hyde Park into a well-off but racially diverse neighborhood. The area around this section of 55th Street, which had once been home to a shopping district replete with liquor stores and jazz clubs, was an epicenter of this activity. The area’s former occupants were replaced by the the white, 10-story I.M. Pei–designed University Apartments buildings that split 55th Street, the concrete townhomes that line each side of the street, and the automobile-oriented shopping center at 55th and Lake Park Avenue. More than 40,000 people were displaced by University urban redevelopment in Hyde Park.

Scene–53rd Street: Northwest corner of 53rd Street. Since roughly the 1990s, the University has pursued a new community development strategy, focusing on attracting people to Hyde Park instead of keeping them away. 53rd Street, Hyde Park’s central shopping district, is the center of that effort. The green glass tower down 53rd to the west is a University-owned office building atop a University-backed shopping center; it will soon be joined by another tower to the north, housing an expansion of the University’s Polsky Center for Entrepreneurship and Innovation. To the east, you can see a Tetris-like glass building, a University-backed luxury apartment building that will, starting this year, house the overflow from campus housing. Development continues up and down the street—across the corner from you, you’ll see a new hotel under construction.

Scene–East of Campus: Northeast corner of 58th Street and Woodlawn Avenue. You are standing in front of the Robie House, an important work of Frank Lloyd Wright. (The Booth School’s Harper Center, just south of you, is meant to mimic the building cantilevers.) The red-brick building complex to the west of you differs dramatically from its near-contemporaries on the rest of campus because it was not built for the University: the Chicago Theological Seminary handed over its old campus to the University in return for a new location south of the Midway. The building is now the Saieh Hall of Economics—hence its coy nickname, “Money Church.” Just north of Robie House is the much-loved Seminary Co-Op bookstore, formerly in the basement of what is now Saieh.

From there, head due west—and you’ve returned to your starting point at the center of campus.

Detour–Fountain of Time: Cross Ellis and continue west down the tree-lined path north of the Midway until you reach Cottage Grove Avenue. To your right, you will pass the southern edge of the University’s medical campus. Cross Cottage Grove and the Plaisance until you are at the southwestern edge of the intersection. Proceed to the recessed circle. This is the Allison Davis Garden, named after the first tenured black professor at the University. Sitting along the path that Davis walked from his home in mostly black Woodlawn to the University, the garden was envisioned as a point of connection between those two usually separate universes. From within the garden, you can see the Fountain of Time, created by the sculptor Lorado Taft and dedicated in 1922. Beyond the fountain sits the rest of Washington Park, which forms the western border of Hyde Park. Continue south and cross back over Cottage Grove to find the tree-lined path south of Midway Plaisance. Move west along that path until you return to Ellis Avenue. The tower of limestone and glass to your left is Logan Arts Center.

Detour–East Hyde Park and Indian Village: Turn north off 55th Street at the first opportunity onto South Shore Drive. You will pass the Shoreland, a once-legendary hotel, on your left. It was an undergraduate dorm into the 2000s. Continue along the path cutting northwest through Harold Washington Park and rejoin Lake Shore Drive heading north. Turn west at 50th Street. You will see the Powhatan and the Narragansett, a pair of elegant art-deco apartment buildings that give the area its name. Turn south at Cornell Avenue and follow it south to 55th Street.