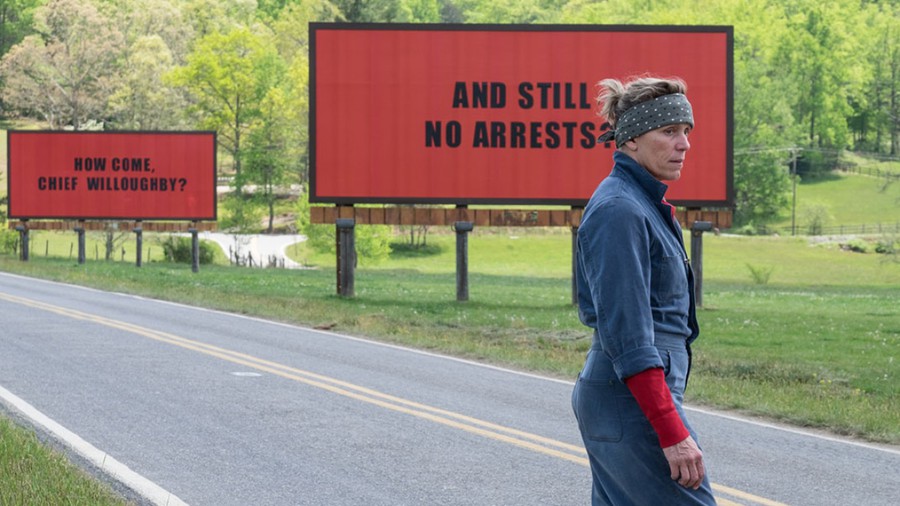 The story is set in the eponymous Ebbing, Missouri, following Mildred Hayes (Frances McDormand), whose daughter was the victim of a still-unsolved rape and murder. Seeking vengeance for her daughter, Hayes rents three billboards, which read: “RAPED WHILE DYING,” “AND STILL NO ARRESTS?” and finally, “HOW COME, CHIEF WILLOUGHBY?” While the town sympathizes with the pain of the heartbroken mother, they are angered by her rage toward police chief Bill Willoughby (Woody Harrelson), who is dying of pancreatic cancer. Mildred’s actions anger her ex-husband Charlie (John Hawkes), embarrass her son Robbie (Lucas Hedges), and frustrate the Ebbing Police Department—particularly one racist officer, Jason Dixon (Sam Rockwell).

The film explores its nuanced moral and ethical dilemmas through these characters, particularly Hayes’s and Willoughby’s family lives. Strong performances from McDormand (perhaps her best since Fargo) and Harrelson encourage empathy with both McDormand’s rage and Willoughby’s good-faith attempts to find the murderer(s).

These moral dilemmas are helped along by McDonagh’s experience as a playwright. He crafts dialogue that is not only hilarious, providing a delightful aspect to this dark comedy, but also pushes the audience to examine morality. For those who have seen his previous films, In Bruges and Seven Psychopaths, McDonagh’s ability to seamlessly navigate the complexities of morality through dialogue will be immediately recognizable. In doing so, McDonagh investigates the motivations of the justifiably enraged mother and the competence of a small town police department. Fortunately, the film’s dialogue is not only intellectual, but also deeply comedic. By setting the film in a town that would sneer at the idea of “PC,” McDonagh is able to embrace absurd territory that most screenwriters would not dare touch. Through this embrace of the absurd, the audience is given moments of levity that impressively feel appropriate in a film that is so dark and painful. The juxtaposition of pain and comedy alone will justify the cost of admission for most audiences.

However, any review of this film must acknowledge a central issue: that the film should have treated race more carefully. Central to Mildred’s diatribe against the Ebbing Police Department is her accusation that they are “too busy going round torturing black folks” to solve her daughter’s murder. While it may seem that the film is trying to criticize racist cops in America, the issue of systemic racism within police departments is never addressed. Frustratingly, in one of the witty exchanges that takes place between McDormand and Harrelson, an n-word­–laden argument ensues. This conversation is played off for laughs, yet poses deeply troublesome problems and lacks a real punch line. More egregiously, the central redemptive character arc for Dixon does not address his racist behavior. The conversations and character development in this film illustrate its fundamental problem, which is that McDonagh is not from the United States, let alone Missouri. This reviewer believes that it would be impossible to expect McDonagh, an outsider to the unique dynamics of U.S. race relations, to add valuable commentary on the topic; this only makes it more unfortunate that he chose to prominently feature it as a part of this film.

All that said, Three Billboards is still one of the Oscar contenders that is worth going to see. The comedy, when present, the action, and the tragedy all make for an entertaining and challenging film. Whether or not this film should win an Academy Award, though, will be rightly litigated in the media for the next several weeks.