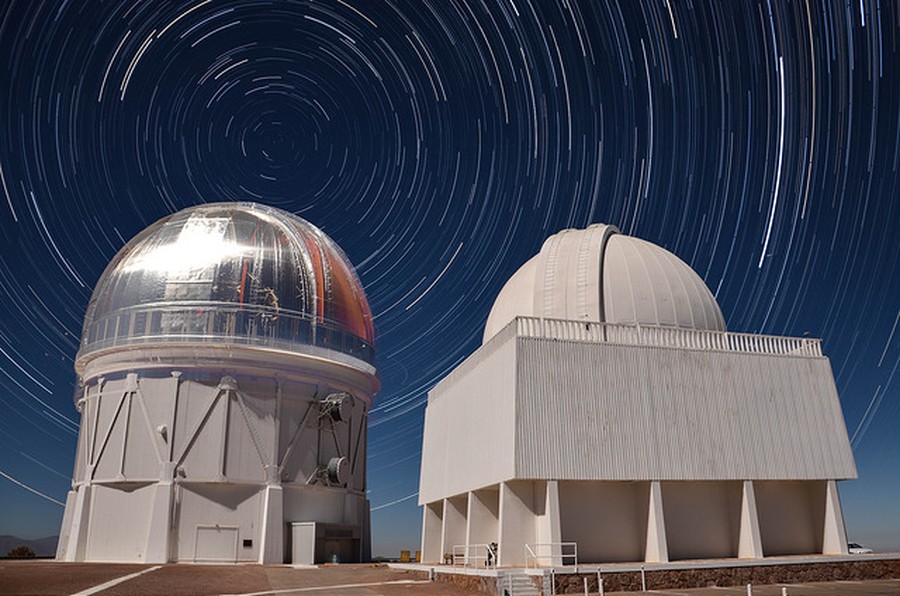 A star trail, or long-exposure photograph of the apparent motion of stars due to Earth's rotation, as captured by the Blanco Telescope in Chile.

The Dark Energy Survey (DES), a project designed to explain cosmic expansion, has released its first three years of data. So far, the project has mapped 5,000 square degrees or about one-eighth of the sky.

DES is an international collaboration between over 400 researchers, including scientists from the University of Chicago Physical Sciences Division, Fermilab, and Argonne Laboratories. They have compiled a repository with nearly 400 million distinct catalogued objects detected from imaging.

DES presented their initial data at the American Astronomical Society meeting in Washington D.C. on January 10th, where they shared the discovery of 11 new stellar streams. These streams develop after the Milky Way galaxy’s gravitational pull absorbs and separates smaller, nearby galaxies and can be detected by the Survey’s Dark Energy Camera (DECam).

Stellar streams are very difficult to detect because they are composed of stars spread out over large distances. Nora Shipp, a graduate student in the Department of Astronomy and Astrophysics, is leading the DES identification of new stellar streams, which affirms the DECam’s power. “These discoveries are possible because DES is the widest, deepest and best-calibrated survey out there,” Shipp said.

Located on the Pacific Coast in La Serena, Chile, DECam contains lenses weighing 388 pounds and comprising the largest optical corrector component currently used in astronomy. This component contains five filters to image the sky in different bands of light and aligns the lenses with a hexapod to capture clear, sharp images. The camera’s imager contains 74 charge-coupled devices, image sensors that allow the detection of miniscule amounts of light.

The ultimate goal of the DES project is to learn more about dark energy, the mysterious energy which scientists believe is responsible for the accelerated expansion of the universe. In 1998, the Supernova Cosmology Project and High-Z Supernova Search Team, both composed of researchers from around the world, discovered acceleration in the rate of universal expansion. This disrupted the scientific community by contradicting previous scientific consensus that universe was expanding at a decreasing rate.