To Publish or Not to Publish: Is That Even a Question? 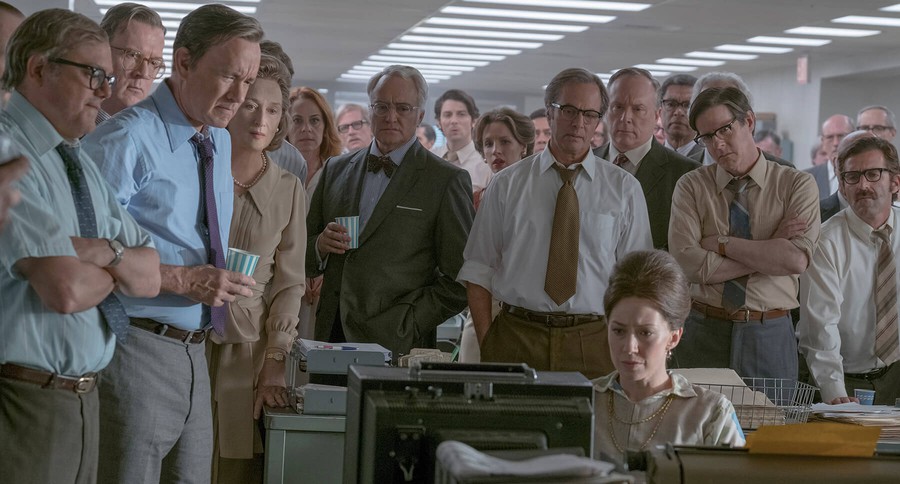 Steven Spielberg’s The Post acts as both a Nixonian narrative and a Trumpian tale: cautionary, revelatory, and empowering.

The Post is an adaptation by first-time screenwriter Liz Hannah of Katharine Graham’s Pulitzer Prize–winning memoir Personal History. Graham, a University of Chicago alum who died in 2001, was the owner and publisher of The Washington Post for over two decades, guiding the paper through scandals such as the Pentagon Papers and Watergate. Directed by Spielberg, the film details Graham’s decision to publish leaked documents from the Pentagon despite a court injunction against The New York Times for doing just that and pressure from investors with the paper’s IPO on the line. Beyond presenting a triumph of the freedom of press in checking government, The Post chronicles Graham’s personal triumph of coming into her own as a woman in power in an almost exclusively male industry.

The relevance of The Post cannot be lost on anyone who even distantly follows today’s rapid news cycle—it’s also one of the reasons Spielberg interrupted his work on his upcoming Ready Player One to swiftly direct The Post in just nine months. In an interview with Jonathan Freedland for The Guardian, Spielberg stated that “the level of urgency to make the movie was because of the current climate of this administration, bombarding the press and labelling the truth as fake if it suited them,” something which Meryl Streep, the film's lead, has addressed in her recent Golden Globes speech.

As Hannah was writing the screenplay, the possibility of a female president still loomed over the horizon, but when the election results came out, the “movie took on a different urgency,” as producer Amy Pascal explained in an interview. Just as the current president attacks news outlets for promoting “fake news,” Nixon attempted to thwart the press after The Times first published a classified study, leaked to them by military analyst what Daniel Ellsberg, on American failures in Vietnam.

Co-star Tom Hanks, during the same interview, added: “That’s what tyrants do, they say: ‘Don’t believe them, only believe me.’” Hanks plays Ben Bradlee in the film, the quick-witted, sharp-tongued executive editor of The Post, a role previously portrayed by Jason Robards in the 1976 Watergate thriller All the President’s Men. With a low growl and biting sarcasm, Hanks brilliantly portrays Bradlee as the quintessentially obstinate yet deeply principled editor ruling his newsroom like a fiefdom. Even before the Pentagon Papers are exposed, while discussing a less groundbreaking story, he stubbornly tells Graham that they “can’t just let the administration dictate [their] coverage just because they don’t like what [they] were saying about them.”

Graham is portrayed masterfully by Streep, who seems to become Graham in all her mannerisms and quirks. Graham moves in Washington’s upper echelons of society, hosting dinner parties with the Secretary of Defense, wearing glamorous caftans, and displaying photos of with her husband along with important politicians on the mantel. Yet, this image of elegance stands in contrast with Graham as the only woman in a sea of suits, nervously fiddling with her notecards before a speech in front of investors after her husband’s suicide leaves her in charge of The Post.

As the struggle between whether to publish, (thus jeopardizing the company’s IPO and future,) or not to publish (denying the public the truth about the government’s deception) escalates, Bradlee pushes for the riskier option, arguing that “If we don’t hold them accountable, then who will?” Graham’s final decision to risk publishing comes as a crescendo moment, reasserting her spine of steel. As a dinner party (with the disgraced Secretary Robert McNamara in attendance) continues in the garden of her elegant D.C. home, Graham paces as her advisers, accountants, and editors push for different courses of action. Her metamorphosis from elegant hostess to formidable power player is complete. Instead of the woman no one believed could turn a profit at a regional newspaper, belittled by her bankers, she has become the leader of what Post reporter Ben Bagdikian, played by Bob Odenkirk, describes as a “small rebellion.” After choosing to publish, 17 other news outlets follow The Post’s lead in exposing the government’s corruption, and eventually win their case in front of the Supreme Court. By the time she emerges, beaming, from the courthouse, it has become clear that her triumph against sexism doesn’t entail overturning male authorities as much as it does finding self-validation in a society that was telling her she wasn’t good enough.

Sweeping six Golden Globe nominations, The Post is more than just the story of the triumphant reassertion of the First Amendment or how Katharine Graham became “one of the most formidable women of the 20th Century,” as described by Streep. It’s more than a thriller about investigative journalism or a historical drama. It’s an urgent reminder of the principle behind one of the final lines in the film “The press was to serve the governed, not the governors.”