A People’s History of Chicago: Celebrating the City’s History One Individual at a Time 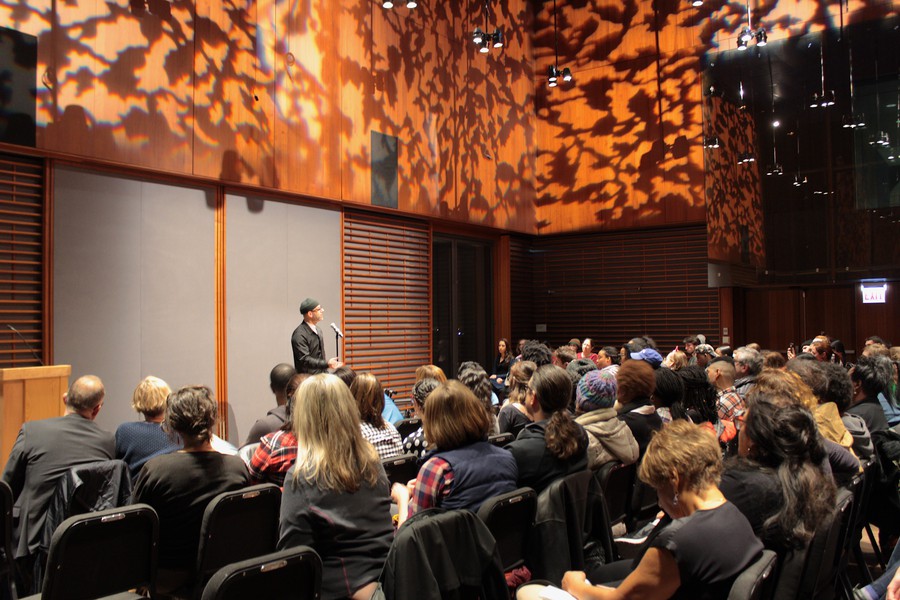 On the evening of January 19, I walked into the Logan Center for the Arts to attend A People’s History of Chicago, a community poetry slam hosted by Kevin Coval, local poet and mentor of Chance the Rapper. The event takes its title from Coval’s critically acclaimed book, A People’s History of Chicago, which examines the hidden history of Chicago through 77 poems—one for each neighborhood—about the often overlooked people of the city. I knew the event would focus on the people of the South Side and those whose voices have traditionally been sidelined by the mainstream media—but I was not prepared for the energetic vibe that suffused the room.

DJ Squeak Pivot kicked off the night with invigorating yet moody R&B-inspired house remixes (Drake’s “Passionfruit” was definitely somewhere in there). The immensely crowded auditorium only grew livelier with the introduction of Coval, who promised no barriers between performers and their viewers—snapping, verbal affirmations, and clapping were all encouraged.

The first half of the program consisted of poems and performances from audience members, performed in open-mic style and introduced by Coval. A self-proclaimed “wisdom and light” in her family of nine smoothly delivered “Hunter and Prey,” a poem which played on the aural similarities between its title and the words “humble” and “pray” to illustrate an emotionally consuming relationship. Next up was Judith Savage, a pediatrician and poet based in the Chicago suburbs. Understanding that Christmas isn’t a happy season for everyone, she incorporated dark imagery involving haunted dolls and crying children to evoke homesickness and a deep sense of alienation. The nightmarish effect was alleviated by a young man who, upon walking up to the mic, pushed it aside and delivered a vulnerable, though wildly humorous, narration of his father’s disappearance. Some audience members were moved to tears by the assumptions others had made about his background and character as the result of a loss for which he should never have been held responsible. Later, a professor at the Art Institute performed a poem on behalf of her friend from Northern Ireland about a half-serpent, half-dragon. The piece lightened the mood for the more serious performances to come.

Poems from the second half of the reading centered closely on Chicago and its social problems. Second-year Ashvini Kartik-Narayan performed “If Chicago Had a Name, it would be called Amberly Price,” calling attention to the people and places we always promised to pay more attention to but soon forgot about. The piece served as a standard-bearer for the following performances, which identified these issues more topically. Some were personal: A Mexican-American woman reclaimed the racial authenticity of her queerness in a delicate bilingual poem addressed to her mother, confessing that her sexuality wasn’t a product of American culture, but an emotion stemming naturally out of her love for Mexico. Others were institutional: Nicole Bond, a winner of the 2016 Gwendolyn Brooks Open Mic, condemned the Prairie Heights neighborhood's dissolution at the hands of poor policies that promoted gentrification. These local and timely issues affecting a silent majority are what students should be advocating for, argued Franzi Wild, a sophomore at the Lab School, in her piece “Speak Me Not, Mark Twain.” The urgency of paying attention to local issues was further emphasized by Lunden Stubbs, a high school senior who decried the tragedies of young black men turning to self-destructive behaviors in “Dip.” With Coval’s final rendition of three poems that, in his mind, commemorated the most critical people in Chicago’s history (Harold Washington, Jean Baptiste Point du Sable, and Frankie Knuckles), the room was left to consider the depth of the city’s history and the role the audience plays in contributing to its growing biography.

While the first set of poems celebrated the individuals of Chicago, later performances highlighted the contemporary issues that lie in its myriad populations and districts. There was an invisible bond within the room, a communal bond solidified through a shared dignity in each participant’s identity, neighborhood, and the city. The event exclusively featured poems that were negatively charged, a potentially natural development from politically pessimistic circumstances. Despite this (or perhaps because of it?), the event erased much of the distance I felt from communities surrounding the University as a recent transplant. On my way out, I bought a copy of Coval’s book, feeling just a little like a Chicagoan for the first time.

The event was sponsored by Young Chicago Authors, Chicago Studies, and the Logan Center.

Article has been edited to include event sponsors.