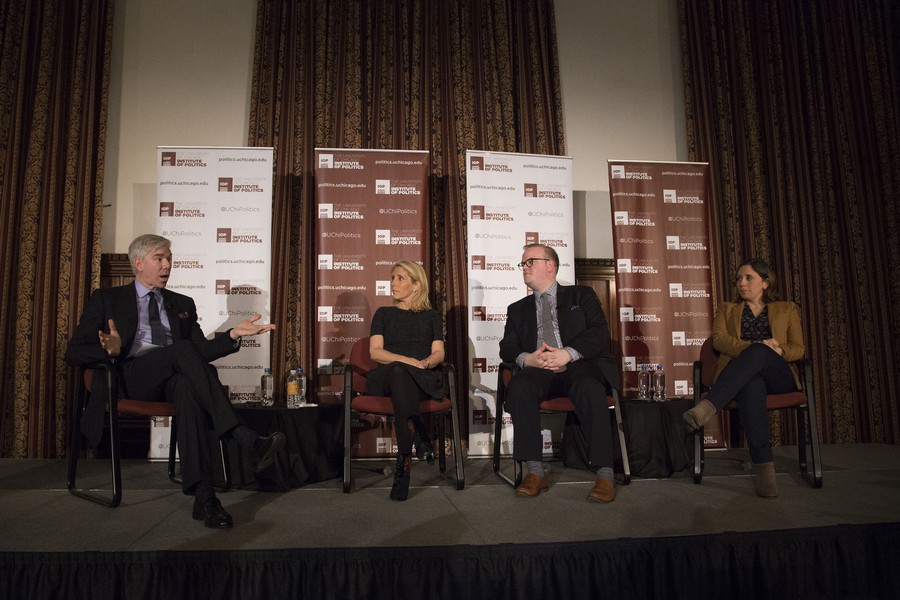 The Institute of Politics (IOP) hosted “President Trump: Year One,” a panel discussion with prominent journalists, at Ida Noyes Hall on Monday.

Gregory began the night by asking frankly: “What has changed?”

For Bash, the West Wing has proven to be an obstacle to reporting the news truthfully: “I have been told by White House officials before reporting a story that the story is false when it turned out to ultimately be true.”

On the issue of Trump’s usage of the phrase “fake news,” Bash commented that “there is actual fake information out there, and to blur the lines is especially dangerous.”

The panelists also noted a current deficiency among journalists: the Trump obsession.

“Everything is not the end of democracy. We lose trust with our audiences when we push it to the extremes. I have been pushing my staff to read history and realize that, in reality, none of this is unprecedented,” Pace said.

Coppins was alarmed that “people have become desensitized to the news. We [journalists] now feel the need to write everything as a massive bombshell.”

The panelists agreed with the sentiment that the news, as it currently is, tends to spend excessive time on single issues—which, according to Coppins, “is the reality of 24-hour news.” “We all write the same stories,” he said. “Unless it’s framed with hysteria, a lot of it gets lost.”

Pace seconded Coppins, but voiced a caveat: “There are also policy stories which do especially well. We often feel in Washington that there is only one story.”

When speaking about bias in the media, Pace noted the paradigm of contemporary media: “I think we have to have a diversity of coverage. Media has become more self-selective. We have lost trust with the public when reporters have decided that ‘this is our fight.’ It isn’t ‘our fight.’”

The importance of different media platforms and their respective impacts was a sustained theme throughout the discussion.

“There has been this trend of democratization of media. In a lot of ways this has been a good thing. However, it has also created a climate ripe for abuse and manipulation,” Coppins said. “[There] are bad actors who have no interest in enlightening but weaponizing the media...in the pursuit of some ideological goal.”

When the floor was opened for questions, an audience member asked how we can be responsible consumers of news. The panelists implored people to take agency for themselves.

Gregory suggested to “be a smart consumer and work hard to go deep. You have the ability to find the main headlines of the day from all sorts of outlets with your fingertips.”