The Money Behind the Magic: Dramatic Irony in Disney's "The Last Jedi"

"The Last Jedi" bites the hand that feeds it—Disney as well as the fans. 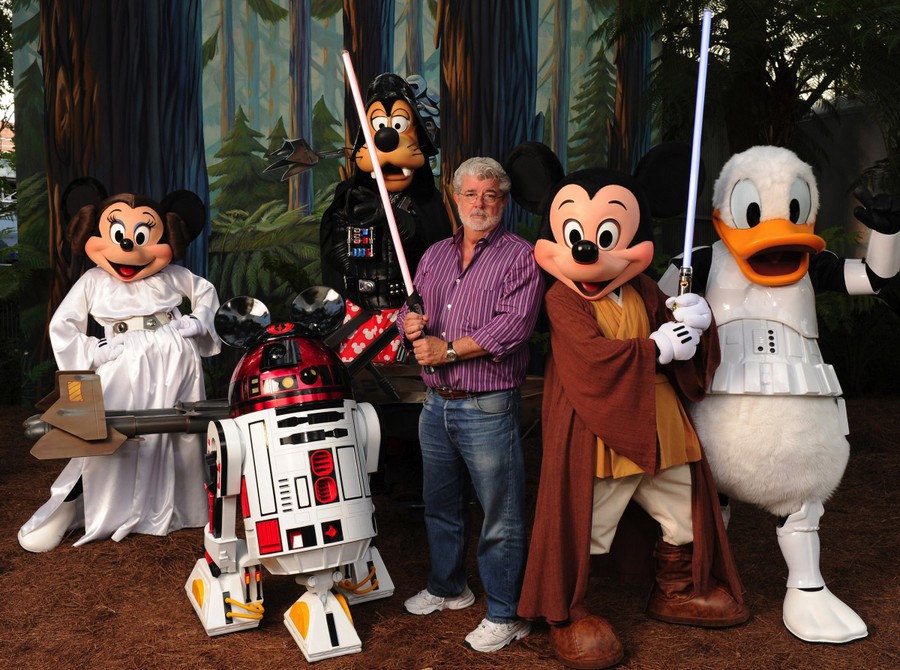 When the Walt Disney Company bought Lucasfilm in 2012, a new hope resurged to relive that breathtaking, magical sensation felt by audiences worldwide when their force first awakened in 1977. Attempting to recreate that initial ecstasy of space-filled self-discovery, Disney has in just five years released three new Star Wars films, with plans to produce new films indefinitely. Or at least until the average wealthy 46-year-old male becomes fatigued with the notion of an all-powerful laser dick—er, sword. While this second coming of Luke Skywalker has so far generated a “certified fresh” reception, Disney’s buyout of Lucasfilm itself is generating billions in profit from box office and merchandise sales, putting the company in an unprecedented position of power. Wielding its laser sword of monetary might with both hands, Disney is tightening its control over new, well-endowed intellectual property. With the recent purchase of a majority of 21st Century Fox, Disney now stands to overtake the entire film industry, despite just releasing a new Star Wars film whose political stance condemns avarice-fueled ambitions of restoring past glory.

Disney’s policy of horizontal integration first began with the installation of Bob Iger. Replacing Michael Eisner as CEO of The Walt Disney Company in 2005, Iger has since been on an expedition of acquisition, spearheading the company’s purchases of Pixar, Marvel, Lucasfilm and now 21st Century Fox. Disney’s catalog of characters is now as broad and as insurmountable as Kylo Ren’s bare chest. Having previously relied on animated and live-action hits such as Chicken Little and The Pacifier, Disney’s yearly production slate is nowadays composed of roughly three Marvel films, one Pixar film, one Star Wars film, one original animated film, one live-action film, a sequel or two, and one live-action remake of a Disney classic (more on Disney’s unhealthy obsession with nostalgia later).

As a result, Disney has risen to the top of the film industry food chain. In 2016 alone, Disney earned $2.5 billion in gross profits, outperforming its next rival competitor by nearly $1 billion. As if being the No. 1 giant enchilada for the third year in a row wasn’t enough, Disney’s merger with Fox will combine the first and third most profitable movie studios to create a Super Fiery Nacho Cheese Doritos Locos Enchilada Supreme straight out of Taco Bell. While Iger’s extended tenure is most likely to ensure a smooth transition between the consolidation of both companies, I wouldn’t be surprised if he pulled out another “one more thing…” at the end of 2021.

Acting in accordance with the writing on the opening crawl, “If you can’t beat ’em, join ’em,” Disney bought 21st Century Fox to kick-start its own new streaming service, which will bring Fox’s formidable film franchises such as Avatar and Alien, as well as major TV programming like The Simpsons and Modern Family, into Disney’s aforementioned inventory of intellectual properties. Because Fox owns the rights to the X-Men franchise, there has even been much anticipation for an Avengers/X-Men crossover. Slated to debut in 2019, this new streaming service (which serves as the first sizable threat to Netflix) and Disney’s already-established dominance at the box office makes it arguably the most powerful movie studio of all time. As seen by its harsh handling of The Last Jedi’s theater distribution, Disney is already starting to recognize its indisputable supremacy.

Living lavishly at the corner of supply and demand, Disney supplied perhaps the most anticipated blockbuster of 2017 and, knowing full well that it had the last word on The Last Jedi, demanded that theater operators nationwide comply with their highly restrictive regulations regarding the film’s exhibition and revenue distribution. Issuing its own form of Order 66 against theater operators, Disney imposed a now-exposed set of terms exhibitors had to agree to in order to even screen The Last Jedi. These terms and conditions included, but were not limited to: 65 percent stake in ticket sales, four-week exclusivity in the theater’s largest auditorium, and an additional 5 percent penalty should the exhibitor be caught violating any conditions.

As the split of ticket revenue between theater operators and movie studios has usually been 50/50, this order seems like the final dagger in a dying business. Struggling to survive against the cost and convenience of streaming services, theater chains across America desperately rely on tent-pole films such as The Force Awakens and The Last Jedi to attract audiences back into theaters. As a result, theater chains and smaller cinemas, which may have only a few screens available, have their hands tied as their pockets are emptied. Disney is suffocating theaters who can’t afford to spend their last breath acquiescing to the demands of a power-hungry mouse.

Ironically, however, Disney’s latest film disavows all that defines the company’s current trajectory. Continuing Star Wars’s history of political protest, The Last Jedi comments on the current political obsession with nostalgia as well as the corruptibility of capitalism. At the center of The Last Jedi is the conceit to “Let the past die.” This is muttered by Kylo Ren, who becomes disillusioned by the systems of power which constantly differentiate between the light and the dark, the Jedi and the Sith. After three Death Stars, two Jedi Skywalkers, and Rogue One, the galaxy is still in “a period of civil unrest.” Time and time again, systems in play continue to fail. And yet, many still believe the path of salvation lies toward a restoration of the past. Numerous main characters in the film are defined by their inability to let the past die: Rey cannot come to terms with the disreputability of her lineage, Luke is marred by the image of himself as a failed legend, and Snoke is determined to restore the past glory of the Sith. Snoke, in fact, is my favorite political symbol. Modeled after Hugh Hefner, he is a figure of opulence whose ascension to power is never explained because his motivations are as empty as they are simple. He merely wants to make the galaxy great again. Likewise, this damning image of wealth is also displayed in the Canto Bight sequences, which illustrate the inherent immorality present in unrestrained capitalism. In this war between the Jedi and the Sith, the good and the bad, only the affluent succeed. And while it might seem strange to compare a company with a country’s political agenda, the parallels are uncanny.

Rather than letting the past die, Disney thrives on history for its programming, with enough planned live-action remakes and sequels to launch its own nostalgia Pornhub. With Star Wars, Disney centers anthology films around the original trilogy, following a larger trend in Hollywood and among consumers for reboots of franchises many already cherish. When Disney finally announced plans for a new Star Wars trilogy, the first responses from fans were anticipatory rumors hoping it would be based on the Old Republic storyline. With the fandom menace stuck worshipping “A long time ago,” The Last Jedi does the exact opposite of what fans expected. It denounces the past, rather than deifying it. In turn, the film inadvertently bites the hand that feeds it—Disney as well as the fans.

Rather than attempting to hide The Last Jedi from Star Wars canon, the fans need to accept the truths the film presents. Rather than being seen as the Scrooge it is, Disney has managed to present a Disney-fied image of its gluttonous self, one that is still obsessed with bills. And their obsession with the past is futile; no matter how hard Disney tries to reawaken the Force, you can’t lose your virginity twice.