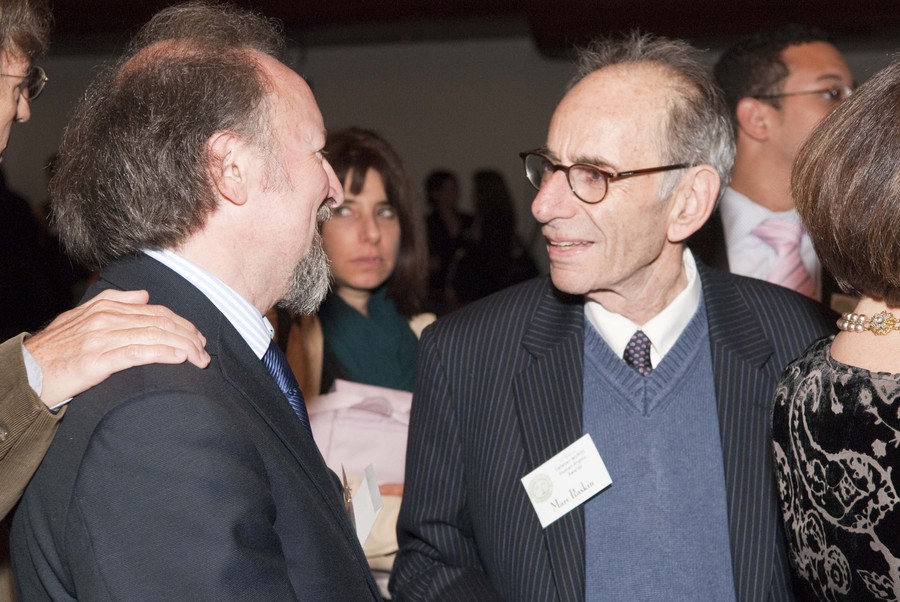 Marcus Raskin, (A.B. ’54, J.D. ’57), a philosopher, pianist, social critic and founder of the influential Institute for Policy Studies, died on December 24 in Washington, D.C. He was 83.

His son Jamie Raskin, the Democratic Representative from Maryland, indicated that he died of heart failure.

Raskin’s indictment of American global power extended far beyond standard progressive critiques of conservatism. He advocated a radical emancipatory politics that opposed corporate influence and criticized the hypervigilance of what he termed the “national security state.”

“Today political parties have little relevance because they are merely vehicles of personal ambition and unexamined vested interest,” he remarked in a 1975 article, “For A Radical Restructuring of the American Political System.”

A musical prodigy, Raskin left home at 16 to study piano at Juilliard, but decided shortly thereafter to come instead to the University of Chicago and study politics under theorists including Hans Morgenthau and Quincy Wright.

As a student in the College, Raskin met and tutored the composer Philip Glass in piano (A.B. ’56). In his memoir, Words Without Music, Glass attributed to Raskin his first serious training in piano music. “My real piano technique began with Marcus, who instructed me on scales and urged me to play Bach,” Glass said. “Marcus gave me a good start, for which I will always be grateful.”

Raskin went on to attend the University of Chicago Law School, and after graduating, worked in Washington for Wisconsin Democrat Robert W. Kastenmeier, and later in John F. Kennedy’s administration under McGeorge Bundy. Skeptical from the outset of nuclear missile buildup, Raskin was a vocal critic of foreign policy in Cuba and Guatemala, and in 1963 left the State Department with Richard Barnet, another former official in the US Arms Control and Disarmament Agency, to found the Institute for Policy Studies (IPS).

The Institute has been described as the first truly independent think tank. Unlike other contemporary research organizations, IPS turned down government funding, aiming at once to freely criticize reactionary policy and to advocate on Capitol Hill for progressive goals.

Writing in 1986 on the legislative influence of research institutes, Sidney Blumenthal argued that think tanks across the political spectrum, including the conservative Heritage Foundation, closely modeled their organizational structure after IPS.

Blumenthal quotes Paul Weyrich, the first president of the Heritage Foundation and a leader of the New Right, looking to IPS as an example for legislative influence. “If an operation as overtly left as IPS could get by with having an impact on the Hill, then a respectable conservative institution could have an even greater impact,” Weyrich said.

Raskin was arrested in 1968 for conspiracy to encourage men to avoid the draft, and went on trial as one of the Boston Five, a group of prominent critics of the Vietnam War including pediatrician Benjamin Spock, Yale chaplain William Sloane Coffin Jr., author Mitchell Goodman, and Harvard doctoral student Michael Ferber.

In 1970, Raskin was instrumental in the publication of the Pentagon Papers when Daniel Ellsberg contacted Raskin and Barnet about leaking documents from the highly classified study to the New York Times. Raskin directed Ellsberg to Neil Sheehan, the New York Times reporter who broke the story.

In his 2008 essay “Paths for Reconstruction in the 21st Century,” Raskin denounced the concentration of American wealth in the hands of a few elites, the militarism of politicians who fail to learn from past errors, and the contradictions of a global economy that produces “a metastasized consumer good system for the relative few, debasement of artistic creativity, [and] ecological destruction.”

Nevertheless, Raskin remained cautiously optimistic about the same radical politics he had urged four decades earlier in his opposition to Vietnam, writing that “a world economy for the benefit and dignity of all people is an achievable objective that could assist the birth of a world civilization (not a world economy) once conceptions of equity and justice are introduced into the study and practice of political economy. The very character of economics would have to change so that the discipline is more than the distribution of scarcity for the have-nots.”