The Chicago Maroon has asked incoming first-years to participate in a survey on topics ranging from family background to political identity to expectations for the future. This year, 544 out of the 1,740 first-year students, or just under a third of the class, provided responses. Over the past two years, the University has altered its admissions policies by accepting a larger class size and introducing two Early Decision rounds on top of the existing Early Action round. But how, if at all, have these changes altered the composition of the class?

Due to sampling biases from the voluntary nature of the survey, the results may not be perfectly representative. However, the results from the survey offer a detailed snapshot of the Class of 2021 and show some relationships between different aspects of a UChicago student’s background and opinions. In particular, income level, religion, and political identification seem to be related to the majority of student opinions and backgrounds. Despite the multiple changes in admissions in the past year, the makeup of the Class of 2021 follows many trends of previous years.

As in previous years, more female-identified than male-identified students responded to this year’s Maroon survey. There were three non-binary responses, including genderqueer and genderfluid. Specifically, almost 7 percent more respondents identified as female, even though the official University profile of the Class of 2021 reveals a slight majority of incoming students are male—52 to 48 percent.

There is a relationship between type of high school and gender identification, as was the case in last year’s survey. From students coming from private schools, the gender ratio of response rate was 51 to 49 percent. In public schools, however, the scale tips, with the respondents being 44 percent male and 56 percent female. The representation of different sexual orientation of the class is also similar to last year’s, with just over 75 percent of students identifying as straight, just under 10 percent as bisexual, and almost 6 percent gay or lesbian.

However, the ethnic composition of the Class of 2021 demonstrates a slight change from that of last year. The percentage of white students rose by almost 10 percent, from 49 percent to over 57 percent, with the percentage of Asian students following the same pattern, rising from 21 to 25 percent of the class. At the same time, the proportions of Black, Indian, Middle Eastern, and Hispanic/Latino incoming students fell compared to the previous year. Though the sharp increases in White and Asian proportions of the class are notable, changes in the racial and ethnic compositions of classes from year to year are common.

Student responses reflect the geographic distribution shown by the official University profile. The largest pools of students came from the Midwest and Mid-Atlantic regions, which each made up almost a fourth of incoming students. As usual, the plurality of students at UChicago came from the Midwest. 61.3 percent of first-years report coming from the suburbs, 33.6 percent from a city, and 5.2 percent from a rural area.

This statistic remains relatively unchanged from the previous year. 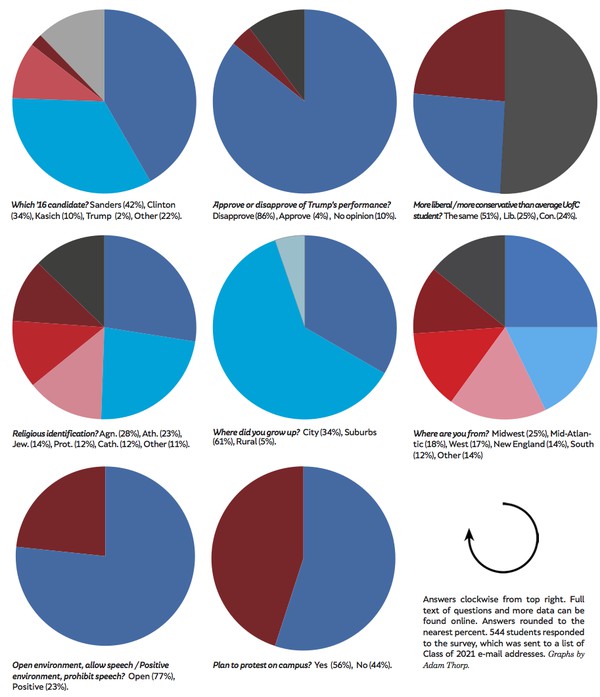 Despite the numerous changes to admissions instituted in the past year, many aspects of students’ religious and political identities remain relatively unchanged. Among the incoming class, 26.9 percent identified as atheist and 22.2 percent as agnostic. The next three largest religious groups—Jewish, Protestant, and Catholic students—each represent over 1/10 of the class; the remaining 10 percent of the class identified as Hindu, Muslim, Buddhist, or Other. Christianity as a whole, however, was the second largest religious group, with 25 percent of students. When asked how religious they were on a scale of 1 (least religious) to 5 (most religious), 46.3 percent of the class answered with the least religious ranking (1), 23.3 percent with the next (2), then 17 percent (3), 9.4 percent (4), and just 3.9 percent with the most religious ranking.

A surprising result arises when comparing the type of home environment and political identity, as connecting city life to be more liberal than that of rural areas is a common political assumption. However, students coming from a rural background identify as more liberal, with an average political score of 1.92, while those from the suburbs and city have scores of 2.16 and 2.29, respectively. However, this could be affected by a self-selecting bias, as students from rural areas that choose to attend university in the city could be different from the population of all rural students, for example.

When asked about politicians, a meager 3.9 percent of students approve of Donald Trump’s handling of the presidency, with 10.2 percent having no opinion, and the other 85.9 percent disapproving. When asked which political candidate from the 2016 election most closely resembled their political views, the plurality of students (41.9 percent) chose Bernie Sanders. Hillary Clinton ranked second (33.9 percent); John Kasich third (9.8 percent); and Gary Johnson fourth (3.2 percent). 2.2 percent of students said they most closely aligned with Trump.

As in previous years, most students’ parents are college graduates. Many hold graduate degrees as well, with 64 percent of students’ fathers and 56.2 percent of mothers having completes graduate degrees. More than 90 percent of mothers and fathers have at least a high school education. 80.3 percent of UChicago students do not have a family member that attended UChicago previously, and 9.6 percent, or about half of the remaining 19.7 percent, of students have had at least one parent attend.

All income brackets reported a presidential approval rating less than 8 percent. The two brackets with highest approval were the $30,000–$60,000 and >$500,000 groups, with 7.7 percent and 7.8 percent, respectively. (The small sample sizes of the lower income levels also did not allow for statistical significance.)

On a positive note, UChicago students throughout all income levels are highly optimistic for the future, with a total average of 4.2 from a rating out of 5. Income level did not seem to correlate with  students’ political or religious identities. 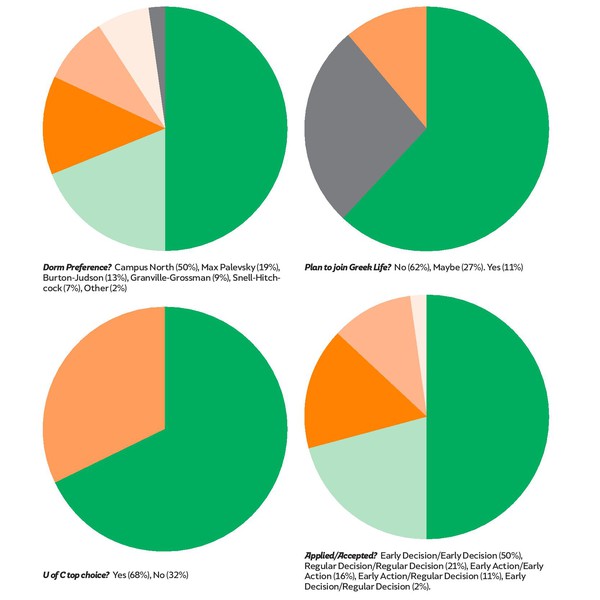 The average ACT score of students was 33.64, with the 25–75 quartiles being 33–35. We could not report the average GPA of students, as different schools use different weighting systems that skewed the results; nor could we report the SAT score data, as the SAT scores from the new and old tests could not be separated. For the ACT, however, there was a slight correlation between income level and ACT score. Average ACT score at the <$30,000 bracket was 30.7, and scores steadily increased to 33.9 at the >$500,000 bracket. The Class of 2021 took an average of 8.3 AP/IB courses throughout high school.

Students were also highly involved in extracurricular activities. Almost three-fourths of students participated in community service. Many students were involved in sports, honor societies, and musical organizations, with 56 percent, 51 percent, and 48 percent, respectively, saying they participated in these activities. Popular clubs of the Class of 2021 include academic bowl, debate, school newspapers, language groups, culture groups, student government, Model U.N., and theater, each with over a fifth of the class involved.

UChicago still remains the top choice school during application for students that currently attend, with 68 percent stating that UChicago was their number one choice. Although this is 1 percent higher than last year’s statistic, this year saw the introduction of the two Early Decision rounds, so it would be expected for the top choice percentage to be somewhat higher. 31.5 percent of regular decision applicants and 59.7 percent of Early Action applicants saw UChicago as their top choice.

Most of the Class of 2021 comes from the early rounds of the application. In the application process, half (50.1 percent) of responding first-years applied Early Decision and were accepted Early Decision. A substantial 79.6 percent of students applied in one of the early rounds, with 16 percent of these students being deferred and accepted in the Regular Decision round. With so many students coming from the newly established Early rounds, it is surprising that the percentage of students that saw UChicago as their first choice hasn’t risen more than just a percent over the past year, as one would assume that more Early Decision and Early Action students would view UChicago as their top choice.

5.5 percent of students were recruited to play for UChicago in varsity sports, and 14.7 percent plan to walk on to a varsity sport. When asked about plans to play any club sports, UChicago students are rather undecided, with the most popular answer being “maybe,” at 38.1 percent. 68.7 percent, more than two-thirds of students, plan to work part-time while in college as well. Most students did not intend to participate in Greek Life. 62 percent of respondents don’t plan on joining a fraternity or sorority, while 28 percent answered “maybe.” 49.6 percent of students listed Campus North as their top dorm preference, while the least popular dorm was Stony Island, which 0.92 percent, or five students, listed as their top choice.

Not surprisingly, the most popular anticipated major among respondents is economics, with almost a third of students, 32.6 percent, expressing interest in the subject. Other popular majors include biology, political science, math, and computer science, each with around 15 percent interest. The most popular double major interests include economics/political science, economics/math, economics/computer science, and math/computer science. Less than 10 percent of students were undecided. There were 189 unique responses out of 537, suggesting the Class of 2021 expresses a lot of variety in its interests.

Correction: One of our graphs initially stated that 4% of students had no opinion of Trump's presidential performance, and 10% approved. The caption has been corrected to reflect that 4% approve, while 10% are neutral.

By Juliette Hainline and Vishal Talasani

The Maroon sent incoming freshmen a survey where they answered questions about their backgrounds, life experiences, and plans for college.