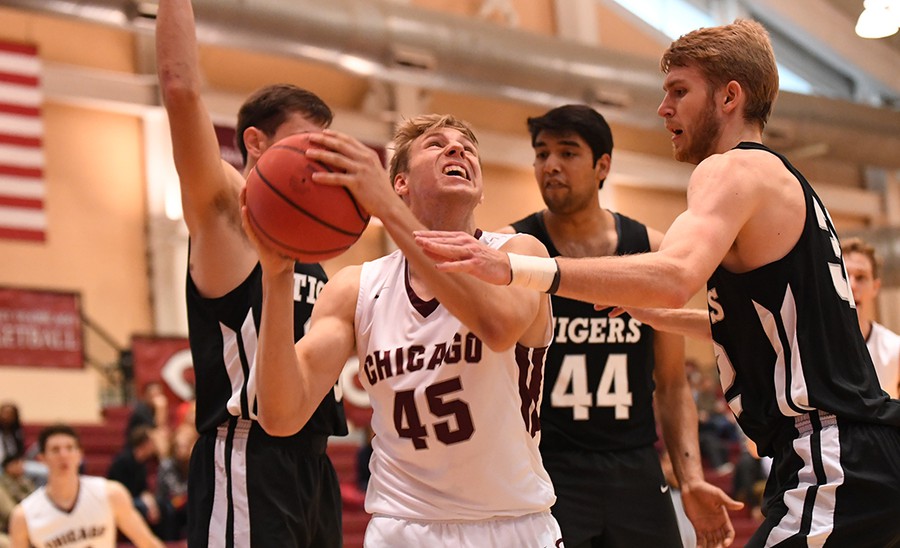 First-year Ryan Jacobsen fights through defenders as he makes his way to the basket.

The University of Chicago men’s basketball team started off the new year with its 17th annual game against No. 10 Wash U. Although the Maroons were ahead for the majority of the game, Wash U struck back in the final few seconds to beat UChicago 79–78. The Maroons now have a record of 4–8 for the season. UChicago started out strong, securing a 19–8 lead with three-pointers by fourth-year guard Jake Fenlon and second-year guard Jordan Baum, followed by a layup by third-year guard Justin Jackson. With the entire team working together to score, the Maroons saw their largest lead at 29–13. Although the opponents began to make a comeback, second-year forward Sam Sustacek brought the lead back to 39–29 with two consecutive layups. With another score by Fenlon at the end of the first half, the Maroons led the game 45–34 going into halftime.

To begin the second half, Fenlon scored another three-pointer, but Wash U bounced back, increasing the score until they were only behind by two points at 54–52. But, continuing with the theme of three-pointers, third-year guard Noah Karras and Fenlon each scored another three points to safely increase their lead to 70–58. With just four minutes left in the game, fourth-year forward Collin Barthel brought the score up to 76–69 with a layup. The Maroons’ defense couldn’t hold onto the lead, however, and two free throws in the last six seconds for Wash U brought the opposing team ahead 79–78.

The top UChicago scorer of the game was Fenlon with 17 points, including five three-pointers. Behind him was third-year forward Ryan Jacobsen with 14 points and nine rebounds. Baum also had seven rebounds, eight assists, and scored six points. Barthel and Baum also brought in many rebounds, with six and seven respectively. Barthel scored eight points, while Baum scored six. In total, Wash U collected more rebounds, 45–38. At the end of the game, UChicago converted 35.5 percent on three-pointers, 84.6 percent on free throws, and 43.1 percent on field goals. On the Wash U side, the Bears made 23.1 percent of their shots from deep, 41.9 percent from the field, and 82.4 percent from the charity stripe.“I thought we played well and did a great job executing our game plan despite the loss,” Karras said. “A lot of guys stepped up and made big plays throughout the game. Individually, I think I did my part in hitting shots and playing solid defense, though I think both could have done better at different points during the game. I’m going to focus on attacking the basket more and finishing stronger rather than trying to finesse.” Karras ended the game with three assists and one rebound, with a total of nine points scored. The UChicago basketball team will play a home game against New York University on Friday at 8 p.m.