Yaron earned a graduate fellowship from the University as well as an Alfred Sloan Dissertation Fellowship for his doctorate work. 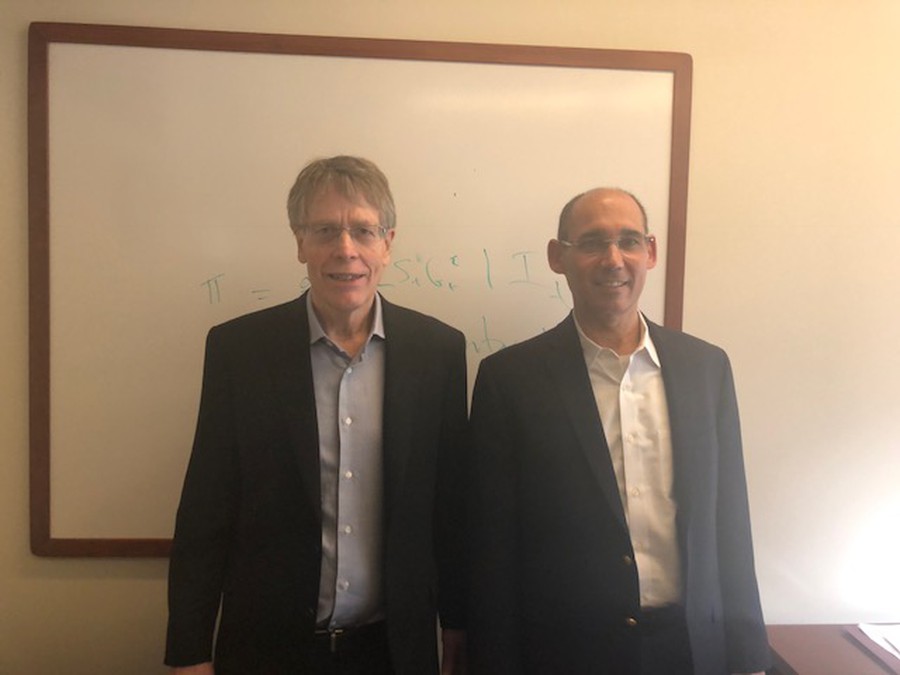 From left: Dr. Lars Hansen, a winner of the 2013 Nobel Prize in Economics, and his doctoral student Dr. Amir Yaron MA'1992, PhD'94, who was just nominated to lead the Bank of Israel.

A professor who completed graduate studies at the University of Chicago was nominated by Israeli government officials on Tuesday to lead Israel’s central bank.

Amir Yaron (A.M. ’92, Ph.D. ’94), who currently teaches banking and finance at the University of Pennsylvania’s Wharton School of Business, was nominated by Israeli Prime Minister Benjamin Netanyahu and Finance Minister Moshe Kahlon to become the next governor of the Bank of Israel.

(The title “Governor” for the head position is used by central banks around the world, including the Bank of England and the Bank of France.)

Netanyahu and Kahlon made the announcement at a press conference in Jerusalem on Tuesday afternoon; Yaron did not attend.

Yaron was unavailable for comment to the Maroon by publication, but told Reuters that he had been in talks with both Netanyahu and Kahlon “on Israel’s economy and its achievements and on the ways to advance Israel’s economy and society and deal with global and local challenges.”

“I believe that Professor Yaron will lead the Bank of Israel responsibly, professionally, with great wisdom, with an understanding of the new economy, and, on the other hand, will facilitate stability in the Israeli financial and monetary system,” Netanyahu said in a statement released after the conference.

Yaron, an expert on investments and macroeconomics, holds both Israeli and American citizenship. He grew up in the suburbs of Israeli metropolis Tel Aviv but has lived in the United States for around 20 years.

He has authored peer-reviewed papers on economics and finance, and won awards from the National Science Foundation and the American Finance Foundation.

Yaron earned a bachelor’s degree in economics and sociology and a master’s in economics from Tel-Aviv University. While at UChicago, he earned a graduate fellowship from the University as well as an Alfred Sloan Dissertation Fellowship for his doctorate work.

His doctoral adviser at UChicago, Lars Peter Hansen, currently serves as the David Rockefeller Distinguished Service Professor in Economics, Statistics and the Booth School of Business. Hansen was a winner of the 2013 Nobel Prize in Economics.

“It was my privilege to serve as his dissertation advisor,” Hansen said in a statement posted on his website on October 9.

Mentioning that he learned of Yaron’s appointment to Israel's central bank while visiting Wharton, Hansen said, “Amir has had a very distinguished academic career to date, establishing himself as an intellectual leader in the field of asset pricing... He is a terrific choice to lead the Bank of Israel, and I am pleased to congratulate him on his new appointment.”

This past May, Yaron returned to UChicago to spend a week as the Dr. Jeanne and Rex Sinquefield Visiting Researcher at the University’s Becker Friedman Institute.

The possibility of Yaron receiving the position was reported in Israeli media in September. The Bank of Israel’s current governor, Karnit Flug, had announced in July that she would step down in November.

However, Yaron still faces an approval committee before his new position is official. Pending approval, his term will begin on November 12.

Some Iraeli financial experts have voiced skepticism about how effectively Yaron will be able to govern the Bank of Israel after spending so much time abroad.

“Yaron lacks expertise about the Israeli economy, and his academic articles address global or American financial issues,” financial journalist Sami Peretz wrote in an analysis in in Israeli newspaper Haaretz. “His knowledge of macroeconomics and finance are in line with what’s needed from a central bank governor, but the Bank of Israel’s governor needs a few more things that aren’t on Yaron’s resume – chief among them management experience.”

The Bank of Israel was established in 1954, six years after Israel’s establishment, and works to assist the Israeli government’s financial initiatives and to keep Israel’s economy stable, according to its official website.