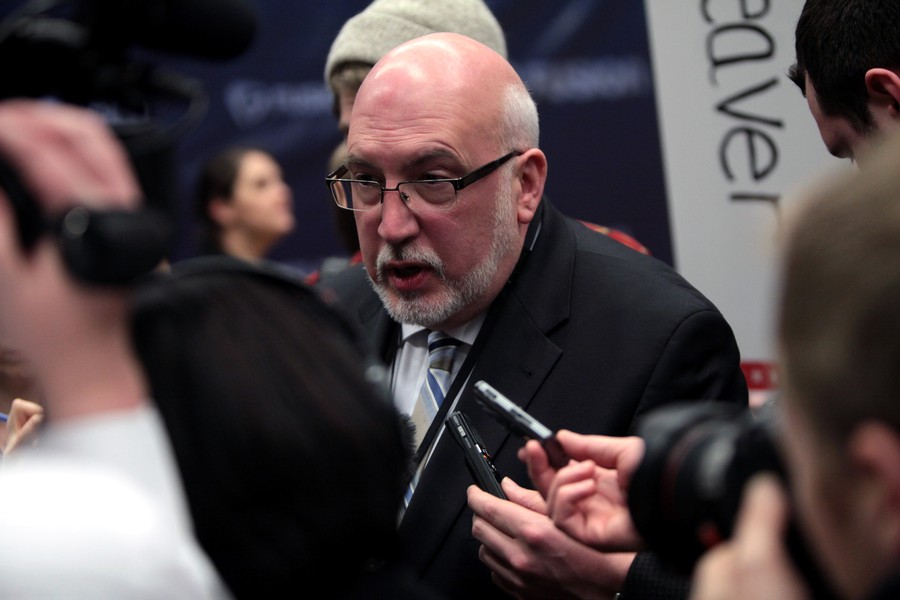 The discussion was moderated by Paul Tewes, a current fellow at the Institute of Politics and previous director of Barack Obama’s historic Iowa Caucus campaign.

Fourth-year Sam Roth, political director of the UC Dems, introduced Weaver. He noted that despite Sanders’ unsuccessful presidential bid, his campaign garnered over 13 million votes and won primaries in 22 states with Weaver at the helm.

Tewes began by asking Weaver about the beginning of his career in politics. Weaver explained that as a student attending Boston University in the 1980s he got involved in the anti-Apartheid movement, and was ultimately thrown out of BU for “trying to build a shanty town in front of a student union building.”

Tewes said he then moved back to Vermont, where he met with an old friend who was involved in Bernie Sanders’s ultimately failed 1986 gubernatorial campaign, and found that he was “suddenly the county coordinator after five minutes of conversation, with no political experience.”

At one point Weaver read aloud an excerpt from his book, which contained an excerpt from Franklin D. Roosevelt’s 1944 State of the Union Address. Roosevelt’s speech was given via radio with an ideology that, Weaver said, should sound familiar to anyone who has heard Bernie’s 2016 stump speech.

Weaver equated Sanders’ 2016 campaign to a campaign for a fifth term for FDR, in that it intended to carry out the unfinished business of the New Deal, which Weaver said was abandoned in the 1990s by Bill Clinton and Neoliberalism.

Regarding the future of progressivism in the Democratic Party and the future of American politics, Weaver repeatedly stressed the necessity to organize. He added that progressivism doesn’t have to be strictly coastal and that it can win over voters in more rural states if progressives put in the work. “People in Kansas aren’t your enemy,” he said.

Weaver said he doesn’t believe the Democratic Party will splinter, because a tug-of-war between progressivism and centrism has always existed in the party. He stressed, however, that Democrats need to inspire people.

Millennials have the capacity to leave Republicans effectively “extinct in two election cycles,” Weaver said. Which is crucial, because “Trump is bad, but there’s worse than Trump. ...If he gets re-elected, what comes after him might be unrecognizable to us.”