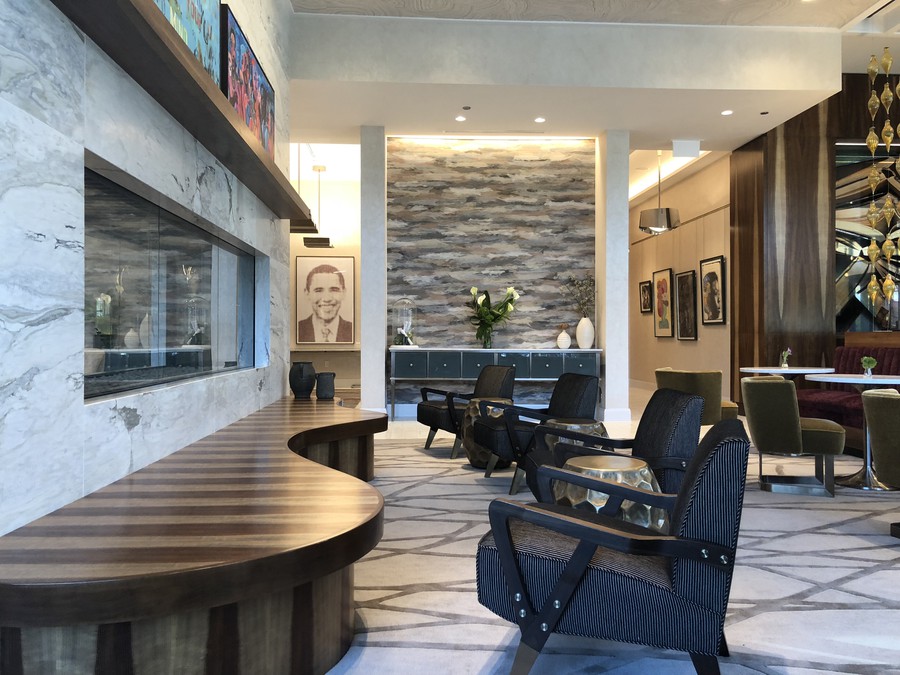 The interior of the Sophy hotel.

Sophy Hotel, a new luxury hotel, has opened at the corner of 53rd Street and South Dorchester Avenue.

The hotel is a partnership between Olympia Hotel Management and the SMART Hotels group. According to Director of Sales Paul Calvin, the name Sophy is descended from the Ancient Greek word “sophia,” meaning knowledge.

Rooms start at a rate of $159 per night during the winter, and can go up to $499 during University event weekends and other busy periods.

Each guest room includes a vinyl record player with a selection of records, as well as an abstract painting by local artist Joey Korom. In total, the hotel features over 135 pieces of original art. Many were painted by artists based in Hyde Park, Kenwood, and elsewhere in the Chicagoland area.

Construction on the property started just under a year ago. The hotel was designed from the ground up to be welcoming to the community, Calvin said, with enormous industrial-style windows flanking 53rd Street.

Each portion of the Sophy is inspired by a specific art form. For instance, the lobby, inspired by music, features lamps shaped like brass instruments, while the bar is inspired by science, where Erlenmeyer flasks double as wine decanters.

The restaurant includes a private dining room that can be rented out for special occasions. The dining room also contains several works of art on display by students at Hyde Park Academy.

The hotel is part of a recent flurry of development along 53rd Street. In recent years, the University has expanded north with the Polsky Center for Entrepreneurship and Innovation.

The Sophy Hotel is located two blocks west of Vue53, an apartment building which began housing students in College Housing during the 2017–18 academic year.

Olympia Companies also owns the Hyatt Place Chicago South in Harper Court. The management company’s portfolio includes 19 other hotels, many of which are all located near a university or college, such the Inn at Swarthmore in Swarthmore, Pennsylvania, and the Hotel at Oberlin in Oberlin, Ohio.

As one of Olympia’s first luxury properties, Sophy demonstrates the rapid increase of high profile investors descending on the Hyde Park and Kenwood communities.

“We now have the first upscale boutique hotel in Hyde Park ever,” general manager Anthony Beech told The Chicago Citizen during the hotel’s ribbon-cutting ceremony on Tuesday. “As a former resident, continuing to be a part of this ever-growing vibrant neighborhood and being with everyone here today in the community is such a blessing.”

The hotel has now made two donations to the high school's art program.