J. M. Coetzee on Growing Up, Reading, and the Importance of Doubt 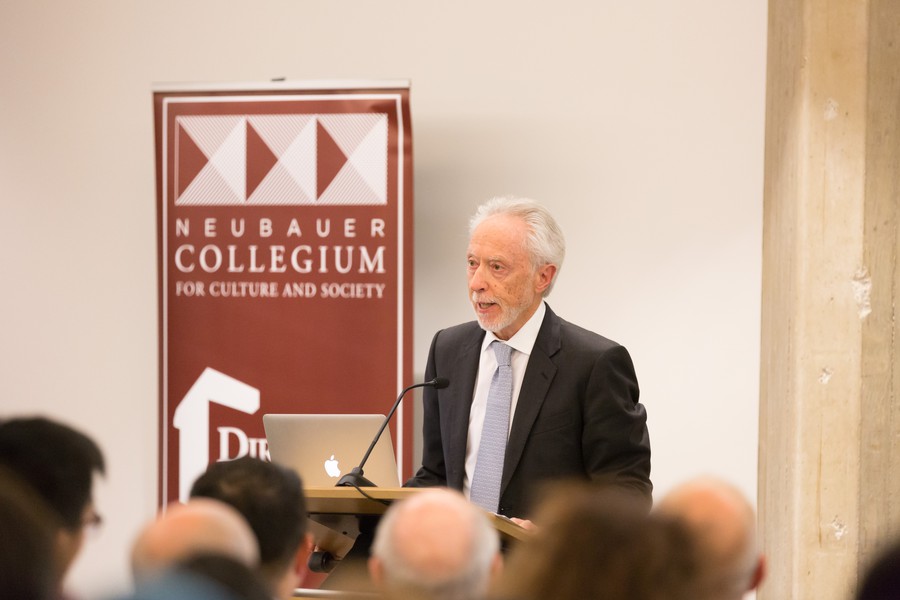 Although Nobel Prize season tends to direct people’s attention toward the University of Chicago’s economics department and its legacy, the return of the Nobel laureate and former University professor J. M. Coetzee to campus last Tuesday did not go unnoticed. Over 250 attendees packed into Room 122 of Regenstein Library to hear the South African–born writer deliver the Neubauer Collegium’s annual Director’s Lecture.

Coetzee, whose bestselling novels include Waiting for the Barbarians (1980), Disgrace (1999), and Elizabeth Costello (2003), served as a professor on the University of Chicago’s Committee on Social Thought from 1998 to 2003. Exploring themes such as race, post-colonial power, gender, and animal rights in his works, Coetzee has marked himself as a prolific writer and bold thinker. And yet he is much more than that: In the words of his friend and Neubauer Collegium Director Jonathan Lear, Coetzee is also someone who is welcoming, shrewd, generous, blunt, committed to students, yet mistakenly labeled as “reclusive” only to those who participate in “hollowed-out rituals.”

When introducing Coetzee, Lear described Waiting for Barbarians as a book that “puts pressure on one’s ability to tolerate truth,” and Coetzee himself as someone who ponders the question of what to do with one’s time on earth. Coetzee’s lecture, entitled “Growing Up with The Children’s Encyclopedia,” was in many ways centered on such ideas of truth-seeking and examining personal history.

“The books we read as children…leave an impression on us, and…this impression goes deeper than the impression left by books we read as adults,” Coetzee stated at the beginning of his talk. His subject was the 10-volume set of the widely published (and perhaps now infamous) The Children’s Encyclopedia.

It soon became clear that neither the 10-volume encyclopedia nor its editor Arthur Mee (who initially served as a “quasi-paternal presence” for Coetzee) could provide the 10-year-old Coetzee with a sense of identity. Though he was born to Afrikaner parents of Dutch and German-Polish descent, Coetzee grew up speaking mostly English at home. As an “aggressively Anglo-Saxon book,” The Children’s Encyclopedia dedicates only 16 pages (11 of which are pictures and maps) to South Africa, while the series as a whole was constructed around an Anglocentric worldview. The book, as Coetzee put it, was “a propaganda arm of foreign policy,” a primer for children to pick up English manners and beliefs.

“Back in 1943…there was no authority to give the colonial child an alternative explanation of who he was and why he was there,” explained Coetzee. The limited selection of books in his household were confined to classics of the Western canon.

Throughout his talk, Coetzee illuminated the problematic ways in which the encyclopedia propounded ideas of race, sex, and the notion of self-sacrifice. Mee’s optimistic outlook on social progress contradicted the graver truths underlying race theory, and extended an imperial narrative of shouldering the “white man’s burden” to justify colonization. The encyclopedia also depicted pictures of nude Greek sculptures with their private parts wiped out, and censored all mentions of genitalia, even (to the audience’s laughter) in a chapter named “Our Wonderful Glands.” Moreover, Coetzee criticized the book for its portrayal of self-sacrifice as a noble act: The story of Jack Cornwell, who died at the Battle of Jutland at age 16, left a lasting impression on a young Coetzee, and haunts him even to this day. Alongside troubling depictions of race and gender, the imperial idea of glorifying dying for one’s empire made The Children’s Encyclopedia a body of work that was misleading, indeed harmful, for the young reader.

Despite growing up with The Children’s Encyclopedia, Coetzee was not—as his project exemplifies—roped into its propagandic onslaught, or even the world of English-language classics stacked on his childhood bookshelves.

“I never embraced the English language as my own,” said Coetzee, who described himself as an “outsider.” One might find it surprising that Coetzee, who majored in English and later became a professor of English literature, “always read English books at a distance.”

To reflect on the encyclopedia he read between the ages of three and 10 at the age of 78 is, for Coetzee, no trivial or accidental task. Rather, it is a compelling mode of self-discovery, a critical move to cut toward the sentimental—and to reject it. But his concern regarding the degree to which one can cast off childhood impressions was one that continually pulsed beneath the talk.

“Arthur Mee still has me in his grasp,” Coetzee reluctantly admitted at the end of his lecture. Not even the historical, systematic approach he adopts for revisiting the encyclopedia nor the keen, analytical eye he turns towards its questionable idealisms can eliminate the vestiges of early and impactful reading. “The questions remains,” he asked, “whether a rejection of early childhood influences…[has the power to] wash them away, as if they had never existed.” His answer was simple: “I have my doubts.”

Far from throwing off the audience, the expression of doubt that concluded Coetzee’s convincing, hour-long lecture captures the kind of thinker that he is. One might think of the moment in Waiting for the Barbarians when the magistrate says, “Pain is truth; all else is subject to doubt.” One might also recall the Swedish Academy’s description in 2003 of Coetzee as a “scrupulous doubter.” Coetzee was skeptical about The Children’s Encyclopedia back in the 1940s; today those doubts have turned into critical analysis and self-examination.

It was fitting that he delivered the lecture through the Neubauer Collegium, an institution dedicated to rigorous scholarship and scrutiny. And it was special for him to return to do so on the University of Chicago campus, a place that, at its best, encourages its inhabitants to read, to reread, and—scrupulously—to doubt.

The livestream of the lecture, which as of October 16 has around 5.6K views, can be accessed here.

The article has been updated to include a link to the lecture livestream.