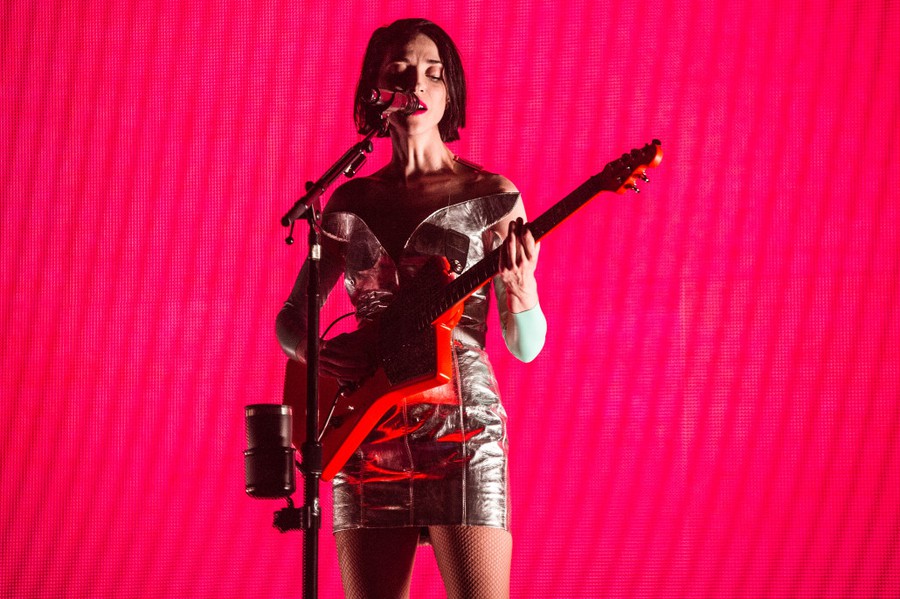 Courtesy of Brian Rasic/WireImage via Getty

Art-rocker St. Vincent’s (Annie Clark) previous album, 2017’s MASSEDUCTION, was a maximalist artistic vision of consumerist excess, lust, and loneliness. With the help of singer and producer Jack Antonoff, Clark managed to construct a sonar landscape grounded in equal parts in the grimy basements of a New York nightclub and an arcade machine from the ’80s. The album is punctuated by the synthesizer-driven instrumentation and angular, neurotic guitar riffs that have become emblematic of St. Vincent’s music.

Recently released, MassEducation is Clark’s re-working of MASSEDUCTION, and presents a sharp divergence from this aesthetic. The cleverness of the title may come across as a little contrived, but the change of stylization away from all-caps presages a departure from the volume and saturation of MASSEDUCTION. Indeed, guitars and drum machines are discarded altogether as Clark’s voice assumes center stage, backed up only by a piano played by long-time collaborator Thomas “Doveman” Bartlett. In a handwritten letter released as part of the promotion for this album, Clark describes how the making of the album was no more than “two dear friends playing songs together with the kind of secret understanding one can only get through endless nights in New York City.”

The intimacy and familiarity of Clark’s process makes the record a minimalist afterimage of the vertiginous rollercoaster ride that was MASSEDUCTION. Each song required just two or three live takes and involved no postproduction editing to augment or alter the sound of the album in any way. This is not to say that MassEducation is little more than an unplugged, bare-bones cover of MASSEDUCTION. Rather, the record comes into its own, offering the listener a front-row seat to Clark’s emotional vulnerability, cloaked in the original record behind a wall of electronic production.

What is striking on first listen is the way Clark deliberately scrambled the original track order, choosing to lead with “Slow Disco,” MASSEDUCTION’s penultimate track. The lush stringed instrumentation of the original track is dropped altogether as the track introduces the listener to what is to come: the sparse, almost confessional interior that will define the rest of the album, desperately bargaining with an ex-lover that separation “beat[s] a slow dance to death.”

Indeed, the best of the record shines through when this shift in pace and instrumentation allows ample room for both Clark and Bartlett to deploy their virtuosic skill and populate the empty space. Arguably the finest track of the re-release, “Savior” exemplifies this in its fullest beauty. Here Bartlett imaginatively reproduces the ominous pulse of the bass and drum machine in the original track by plucking the lower strings of the grand piano to create the pizzicato and timbre of a muted guitar. This rich texture reaches a spectacular confluence in a cascade of frenzied arpeggios that complement Clark’s gravity-defying falsetto. At its best, the change of pace in MassEducation unlocks an added dimension of wistfulness and a lover’s nostalgia for an imagined past. In “Young Lover,” Clark goes a step further and entirely re-imagines the dance track (reminiscent of Lorde’s Melodrama, also produced by Antonoff) as a slow, almost mournful ballad when Clark sings of a dream where she and her lover were in Paris, this line assumes a more tragic, sinister tone than in the original

However, the shift in pacing is not without its imperfections. Both “New York” and “Happy Birthday Johnny,” already downbeat piano-driven ballads in the original, come across as little more than covers, and it was a shame that the excellent “Young Lover” was sandwiched in between these two tracks. The album ends on a whimper with “Pills” and “Hang on Me,” which were the second and first tracks of MASSEDUCTION, respectively. It almost seems as though they had to be shoehorned at the end, no more than pale imitations of the originals. “Pills,” in particular—originally a riveting, upbeat pick-me-up driven by choppy drum machines and Clark’s tongue-in-cheek delivery—seemed especially awkward and half-formed in its reincarnation.

Of course, some of these misfires can be expected when one tries to transpose the carefully constructed landscape of an existing album into an entirely new context and sound, as Clark has done. Do not mistake the sparseness of this record with a lack of quality—MassEducation is some feat. Perhaps what is most surprising about it is how little it seems like a record a heavyweight of the art-rock genre would release, given how un-art it feels. Devoid of the grandeur and technicolor of the previous record, MassEducation comes across as straight-laced and unpretentious, a self-reckoning by an artist with unending ambition, unafraid to confront and deconstruct her own art. It is all the better for it.