New Kids on the Block: An Interview with the First-Time Actors of First-Time Director Jonah Hill’s "Mid90s" 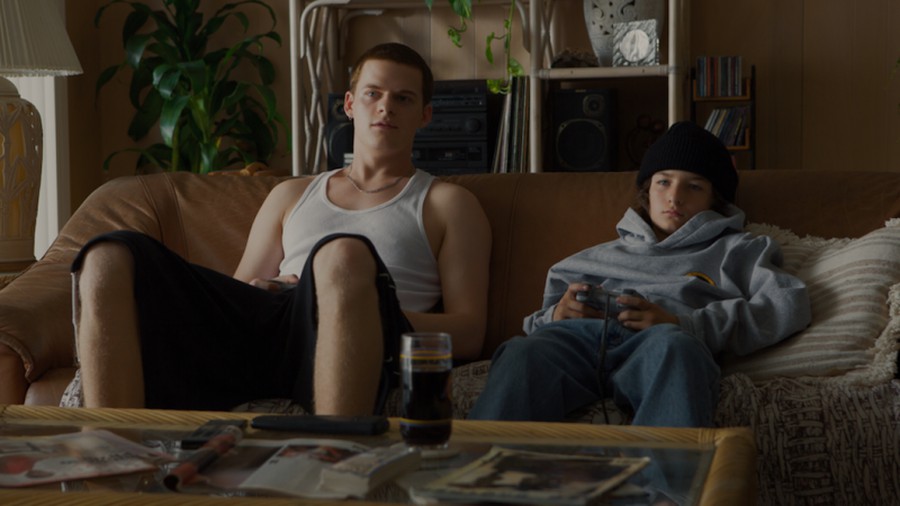 On October 4, A24 at UChicago and Doc Films treated students to an advance screening of Mid90s, Jonah Hill’s directorial debut, followed by a Q&A with the cast. Hill’s passion project and directorial/screenwriting debut made the audience laugh, cry, and then laugh some more. Set in 20th-century Los Angeles, the film follows 13-year-old Stevie (Sunny Suljic) as he turns to the skating community for an escape from his domestic hell of a home. Stevie lives with his orange juice–chugging and physically abusive older brother (Lucas Hedges) and his oversharing single mother, (Katherine Waterston), neither of whom really appears to care about him. When he sees a group of older boys—played by an ensemble of professional skaters—hanging out outside a skate shop, Stevie goes to great lengths to impress them, despite having nothing in common with them. You don’t have to remember the ’90s or know anything about skateboarding to place yourself in Stevie’s shoes; his quest for acceptance from, and idolization of, the other boys is the driving force behind the film, and results in a universally relatable story.

The reason Mid90s works so well and feels so real is because the plot is driven by an exploration of nuanced and realistic characters rather than a cliché coming-of-age narrative arc. The dialogue flows naturally and never feels forced. The script is built on light moments of humor—Hill didn’t lose his comedic touch when he switched to directing—but every once in a while, a shockingly dark, serious moment shakes the humorous foundation and makes the film feel incredibly real. Like any true story, it is impossible to fit Mid90s under the umbrella of one genre, and the characters are too layered to pigeonhole into traditional character archetypes. Ray (Na-Kel Smith) is the leader: a future pro skater who just wants to travel the world but also cares deeply about his friends from home. He becomes a father figure of sorts to Stevie; he reminded me a lot of Benny from The Sandlot. Fuckshit (Olan Prenatt), while pretending not to care about anything, including the vulgarity of his nickname, has a dark side fueled by substance abuse and a fear of Ray leaving him behind.  Fourth Grade (Ryder McLaughlin), perceived by the others as “the dumb one,” rarely speaks and is always glued to his camcorder, harboring secret ambitions of becoming a filmmaker. Meanwhile, Ruben (Gio Galicia) seems to be Stevie’s natural foil because of his jealousy of Stevie’s acceptance in the group, especially considering that he might need the escapism of skating even more than Stevie does. All four of these characters were played flawlessly by first-time actors who share a pro-skating background. The success of such a character-driven film is largely dependent on the portrayal of the characters, and Hill took a huge risk in casting non-actors. It is a testament to his skill as a director that his risk paid off and resulted in one of the best films of the year.

– Mid90s will be released in Chicago on Friday, October 26.

The day after the screening at Doc Films, I was given the opportunity to sit down with Sunny Suljic, Olan Prenatt, Ryder McLaughlin, and Gio Galicia in their hotel room to talk to them about their experience working on Mid90s.

Patrick Egan: Most of you guys are first-time actors. Do you see yourselves continuing in acting, and maybe branching into roles that aren’t as related to skateboarding?

Ryder McLaughlin: I really want to play something I can’t relate to on any level…the first thing that comes to mind is, like, a psychopath. [laughter]

Olan Prenatt: Yeah. It would be so fun to become a character that…um, yeah.  Acting is cool. It’s an amazing art, how you can take words off of a paper and create this living being, and I really enjoy that art and wanna continue in it.

PE: How do you guys think your acting skills developed over the course of filming? Did the older and more experienced actors on set help with that, or did Jonah help with that?

RM: It was a lot of Jonah. Any time I had a question of what I was feeling or how I should react to something, I would just go to him and he would explain it to me. It didn’t feel like it was his first time directing. It felt like he knows what to tell me and he knows how to like, make me feel like I know what I’m doing, and I’m comfortable.

Sunny Suljic: Yeah, there was no, like, pressure, it was a very comfortable atmosphere and I mean, he just introduced himself as like a friend so it wasn’t—it wouldn’t make you feel uncomfortable…. He’s very patient and he understands that it’s, like, most, like, all of us our first time and there’s no like pressure. He did really well directing.

PE: What was it like, seeing the movie for the first time; seeing everything come together?

OP: It was emotional.

RM: I almost started crying just from the first sequence of him [Stevie] trying on the hat in the beginning, you know, with the score over it. Then after that it was just like, oh shit I remember filming that, I remember being there.

OP: I really didn’t know what to expect, like I, I’m in front. The first time we all seen it was at TIFF (Toronto International Film Festival) and I’m in front of 1,300 people, and I don’t know if my…if I look…I don’t know, when I seen the trailer, I was like, alright, for sure they probably grabbed my best line that I performed the best and put it in the trailer, so I didn’t know what to expect from my acting, and it turned out to be ok.

PE: What would you say the message of the film is? What do you want people to take away from it?

OP: I say for this film I want everybody to realize no matter who you are or no matter how you look, no matter what you think you don’t have and what you…what your situation is, there’s always somebody, a community with open, warm, welcoming hands.

SS: Yeah, I’d probably say the same. And one thing I want people to take away is, like, skating is like…everyone can do it. It doesn’t matter, like your appearance or anything like that and I want people to take away that like you don’t really need money, you don’t need to really be to smart or anything; not saying you don’t have to learn anything but it’s something that anyone can do. You just need that drive and it’s not based on appearance, it’s just the skill level and everyone’s super supportive.