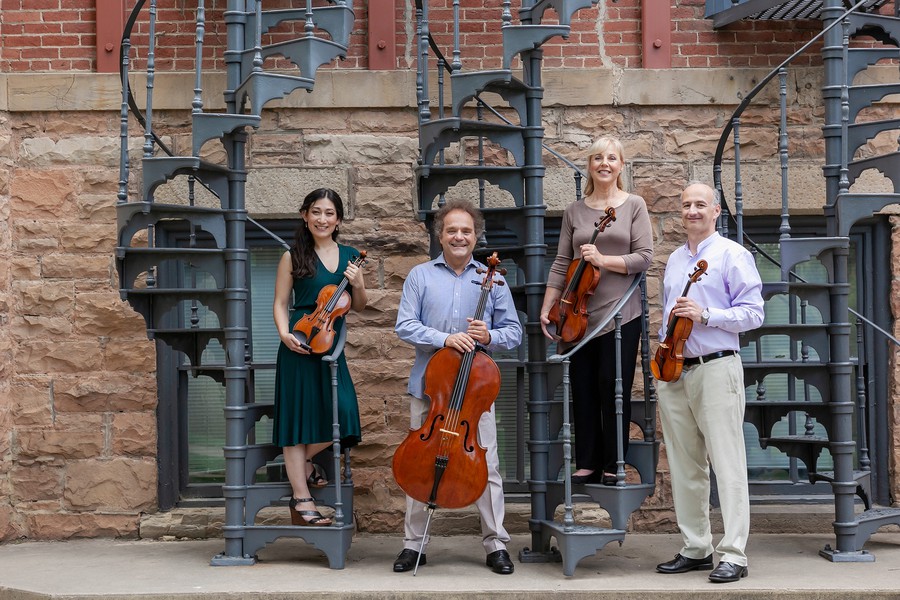 As the opening act for the 75th season of UChicago Presents, Takács Quartet delivered a breathtaking performance on the evening of October 12.

Takács Quartet, a Hungarian string ensemble based in Boulder, Colorado, began their program with Haydn’s “String Quartet in D Major, Op. 20, No.4.” The rendition remained faithful to Haydn’s constant dolce markings throughout the piece, and the quartet executed emotion through intense dynamic contrast within the themes. Unfortunately, the acoustic nature of Mandel Hall worked against the performers’ intended effect, and many of the softer, more tender parts of the piece—especially those of the first movement—were muffled by the spacious venue. The players, however, did their best to highlight the composition’s contrasting expressive elements through brisk crescendos and diminuendos. Especially impressive was the third movement in which the quartet closed the piece with a fantastic finale in true Haydn fashion: powerful bursts of sound followed by equally poignant silences.

The best performance of the night was undoubtedly the quartet’s second piece, Shostakovich’s “No. 4 in D Major, Op. 83.” Distinctive for its unnerving dissonance, the piece was kept private by the composer in 1949 for fear of Soviet censorship due to its bleak and unconventional nature. The quartet’s interpretation was refreshingly melancholic, as first violinist Edward Dusinberre dug into the minor chords and changed meters with sorrowful sentiment. The rest of the quartet followed suit, all matching with succinct and definitive fervor during climaxes and with melancholy during more mellow moments. The performance lucidly exhumed the turbulent historical context of the piece as well as the composer’s own internal frustration and conflict.

Despite his virtuosity and several truly majestic segments in the piece’s third movement, Dusinberre became seemingly too engrossed in his own sound to provide the rhythmic and dynamic support the rest of the quartet required from him. Too often, his interpretation became hasty in buildup and technically imperfect, all while drastically drowning out the sound of the second violin and the viola, throwing the quartet’s sound off balance. His shortcomings, however, were insignificant to the overall performance. Dusinberre’s impeccable interpretation of the first movement sufficiently demonstrated his capacity to meld the composer’s writing with his own colorful musicality.

The closing piece was Brahms’s “String Quartet in A minor, Op. 51, No. 2,” a much more conventional choice than the quartet’s previous. A lyrical piece, the performance reflected the group’s Hungarian roots as the quartet breathed life into the “gypsy” themes throughout the rendition, most notably in Dusinberre’s dramatic opening. András Fejér, the cellist and the only original quartet member left in the group, shone above the others in this piece. His powerful and emotional playing is scarcely matched in the cello realm, and his incredible resonance in the instrument’s lower octave demonstrated his musical versatility. When the composition demanded his melody, the performance hall was immediately filled with his vigorous and dark tone that ascended above the others, and when it demanded its retreat, the cello melted back into the quartet sound as immediately and poignantly as it had arrived. While powerful, Fejér did not dominate and made sure to let the other players, most notably the quartet’s newest member, Harumi Rhodes, shine through. The daughter of well-established Julliard String Quartet violist Samuel Rhodes, Rhodes proved her own capacity as a violinist through various points in the piece where her flawless playing rose above that of Dusinberre. Her graceful pizzicato, along with her general vibrant flair, gave the 43-year-old quartet a youthful energy.

The quartet closed the night with a somber encore of Anton Webern’s Langsamer Satz, and once again successfully proved their well-deserved position as one of America’s finest groups of string players.