The Hate U Give and the Hate We Give Back 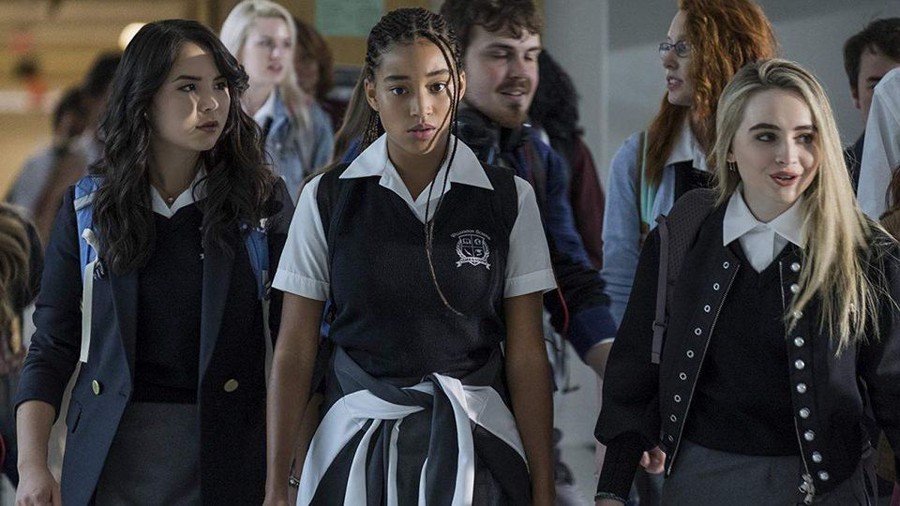 The Hate U Give opens with a seemingly commonplace, yet unsettling, familial scene: The kids are all gathered around the kitchen table as the head of the household, Maverick, played by Russell Hornsby (Fences, Creed II), imparts some fatherly wisdom about the undisclosed facts of life. Except instead of talking about the birds and the bees, Maverick instructs his children on how to act in the event a police officer pulls them over. Heads down. Hands on the dash. Clearly, so the police officer can see them. It’s a brutally honest look at the harsh reality we live in, and only the beginning for the rousing tour de force that director George Tillman Jr. (Mudbound, Notorious) delivers. With their heads down and their sense of safety shaken, the children begin to understand for themselves the true meaning of “The Hate U Give Little Infants Fucks Everybody.”

Based on the best-selling novel by Angie Thomas, The Hate U Give stars Amandla Stenberg (The Hunger Games, The Darkest Minds) as Starr Carter, a 16-year-old girl who likes to keep her home and school lives separate. At home in Garden Heights, a predominantly Black working-class neighborhood, Starr is Starr Version One: a slang slinging, hip-hop loving girl. At Williamson Prep School, a predominantly white upper middle-class institution located nearly 40 minutes away, Starr is Starr Version Two: calm, cool, collected. However, Starr’s carefully constructed walls come crumbling down when she becomes the sole witness to the murder of her childhood friend Khalil by a white police officer. As both communities react to the shooting in very different ways, Starr must choose between speaking up on the behalf of Khalil, thereby putting the lives of her and her family in danger, or remaining silent and attempting to protect her dual identities.

Although not the first film in 2018 to feature minority code-switching—Sorry to Bother You, BlacKkKlansman, and even Crazy Rich Asians also explore this topic—The Hate U Give is the first to imbue the craft of code-switching with such dramatic ferocity and emotional vulnerability. To say that Stenberg gives an Oscar-worthy performance is a gross understatement. It is as heartbreaking as it is heartwarming to witness the various ways in which Stenberg portrays her character as a victim of a divided world, struggling to define herself through her clothing, language, and friendships. Starr tries so hard to keep her relationships between her two friend groups separate, but ultimately she is unable to escape the longstanding history of antagonistic and often violent race relations between Black and white people in America. Caught in a world that continues to see in black and white, Starr resolves to decide for herself not only who she is, but also who she wants to become. “The Hate U Give Fucks Everybody,” but Starr refuses to let that hate bury her down.

Much credit for the touching resonance of this film must be given to director Tillman Jr., whose ability to construct powerful set pieces is top notch. In a scene after the murder of Khalil, Maverick relays to Starr the notion that “Nightmares are always the worst the day after,” serving as a fitting exemplification of the various emotions—sadness, despair, fear, and eventually hate—purveyed throughout the film. Tillman Jr. creates a world in which every day is spent silently mourning the death of another victim of police brutality or racial injustice. It is harrowing, but Tillman Jr. makes sure to keep that nightmare from feeling too oppressive. Within the nightmare, Tillman Jr. instills a ray of light that keeps things hopeful and moves audiences forward. In the film, that ray of light is Starr, but more generally speaking, the film asserts that the ray of light can be any youth willing to stand up and be the change they want to see in the world.

At a roundtable discussion, Tillman Jr. said, “The reason we did the film was to enlighten, to inspire, to keep people pushing, keep using their voice, keep protesting. In the film, Starr says that ‘We will not stop protesting. As much as we shout and as much as we do, they do not hear us.’ And that’s what we gotta do. I was at a screening with the Emmett Till family and they came up to me afterwards saying how proud they were of the film, but I just wish we had the ability to tell stories for them back then in the ’50s. They weren’t allowed to use their voices at the time until Emmett Till’s mother did what she did and opened up the civil rights movement. Imagine what would happen if we all used our voices?”

The Hate U Give is rated PG-13 and opens in theaters nationwide today.