The victim, who is in fair condition, was quickly loaded into an ambulance to UCMC. 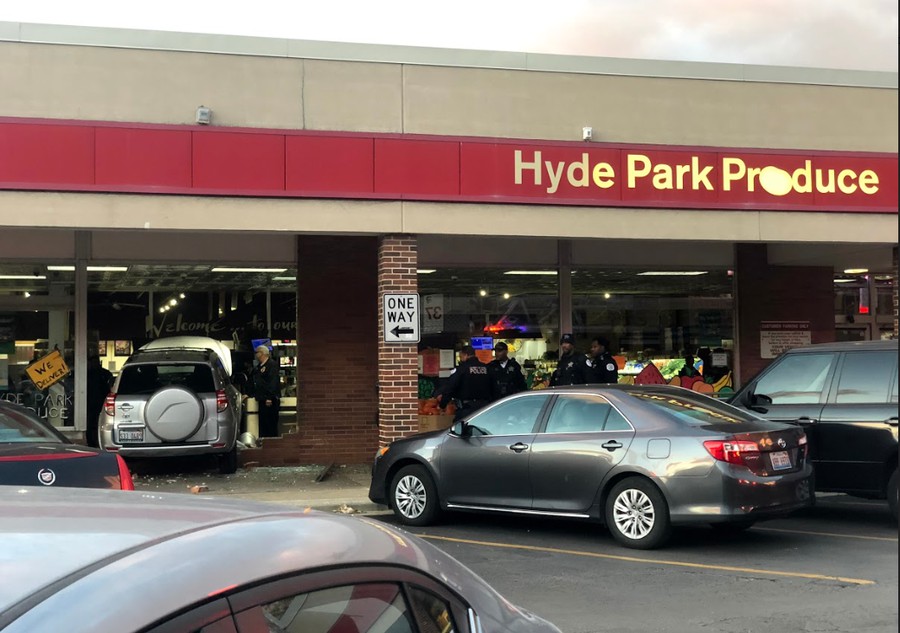 Just after 5:20 p.m. on Saturday, a beige Toyota RAV4 crashed into Hyde Park Produce, pinning a pedestrian underneath the SUV. The victim, a middle-aged man carrying a bouquet of flowers, was sent to the University of Chicago Medicine by ambulance. He received an injury to the leg but is expected to make a full recovery.

Two ambulances, one firetruck, and at least four cars of University of Chicago Police Department officers reported to the scene.

The incident was ultimately determined to be an accident by the police. The driver appeared to lose control of the vehicle, causing it to ram through the store. It is unknown if charges have been pressed. Hyde Park Produce employees declined to answer The Maroon's questions.

The SUV crashed into the left-hand side of the store, shattering one of the store’s windows before ramming into a checkout counter. The car’s airbags had not been activated, meaning the RAV4 was likely not traveling at high speed.

“I’m afraid the person that was hit was walking down the sidewalk and was pushed through the wall into the store,” an eyewitness said. “He had walked right in front of me as I approached the door of the store from the parking lot: a middle-aged man wearing running shoes, sunglasses, and carrying a bouquet of pink flowers. I recognized him as someone I see each morning running at the lake. I turned my head to walk into the store, and a second later, crash. The man was not among the crowd standing around freaking out. Everyone was yelling someone was pinned under the car.”

The store was back up-and-running by Monday morning, albeit with a plywood cover where the window once was.