Entertainment is Dead in the Water in "Hunter Killer" 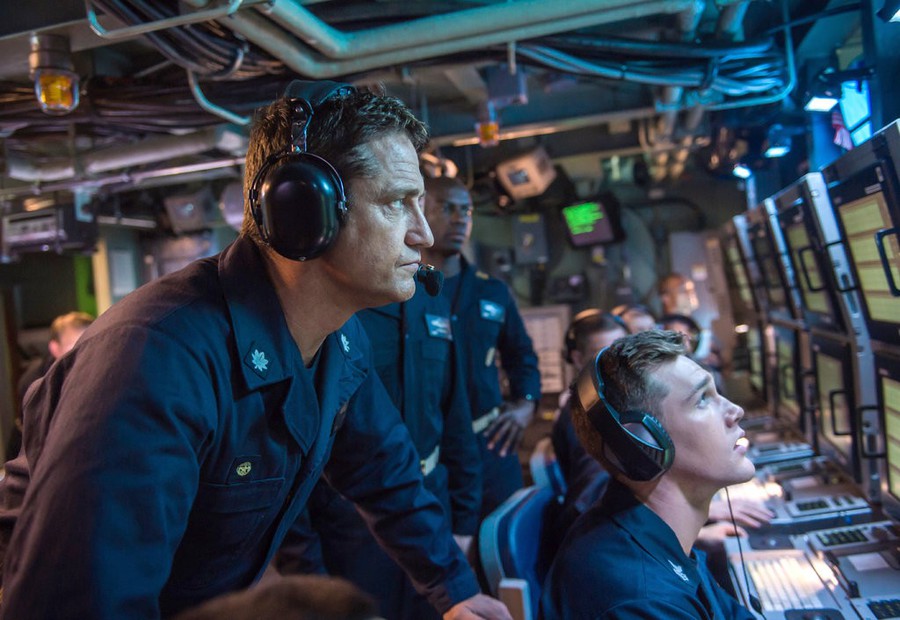 Lionsgate must have a lot of faith in Gerard Butler’s mystical power to make movies break even, because Hunter Killer is the latest entry in the list of action movies the 300 star is too damn old to lead. It’s a nothing-movie: an endless stream of bad CGI submarine action sequences, generic macho military-porn, and laughably bad Russian accents, filmed almost entirely in a fake-looking submarine set reminiscent of a bad ’80s action movie. Watch this if you’re really into watching Butler scream numbers, coordinates, and eyeroll-worthy moral platitudes at his crew. Don’t watch this if you generally prefer to remain engaged or conscious while watching action films.

This film’s plot is both boring and absurd: After an anti-American Russian military leader stages a coup of his government, it’s up to a group of American badasses in a submarine to rescue the Gorbachev-esque Russian president so they can stop World War III. Gary Oldman is in it for a few minutes, but it looks like he’s somehow less invested in his own character than even I was while watching him. All that Butler is asked to do in the movie is shout out orders and incomprehensible strings of numbers and military codes. I hope the paycheck was good, because this role is definitely not earning him anything else.

To be fair, however, it seems almost cruel to expect these actors to devote any effort to rendering the painful cringe fest that is this film’s script. It consists almost entirely of one-liners that became clichéd 30 years ago, but were nevertheless spoken or shouted unironically by the film’s utterly interchangeable military characters. Seriously, who thinks lines like “We’re not so different, you and I” have any place in movies anymore? Combined with the hilariously 2016 plot about Russian-American cooperation, complete with a Hillary Clinton stand-in president, this movie is comparable to white noise—definitely not complex or competent enough to enjoy, but not stupid enough to have fun with it either.

Boredom carries over the action scenes. Submarine combat is a terrible choice for most action movies, and this one is no exception. The CGI underwater scenes are literally muddy; the unclear water makes it impossible to really understand what is happening to the featureless vessel housing the film’s main protagonist. On land, there are mind-numbing sequences of government agents directing a team of soldiers to extract the Russian president from the base and put him in the submarine. If your mental image of these scenes includes macho soldiers sitting around holding pictures of their girlfriends, engaging in totally unrealistic banter about their lives “back home,” and then shooting lots of faceless Russians the next day, then you probably just got as much out of these scenes as I did.

Hunter Killer is the worst type of bad movie. There is not a single redeeming factor in this cynical studio cash grab designed to extract moderate amounts of money from 25- to 39-year-old men who still think Gerard Butler is a relevant action star. Please don’t give this movie your money, because I’d rather go in an actual submarine with no radio contact with the outside world than sit through another trite bore like Hunter Killer.