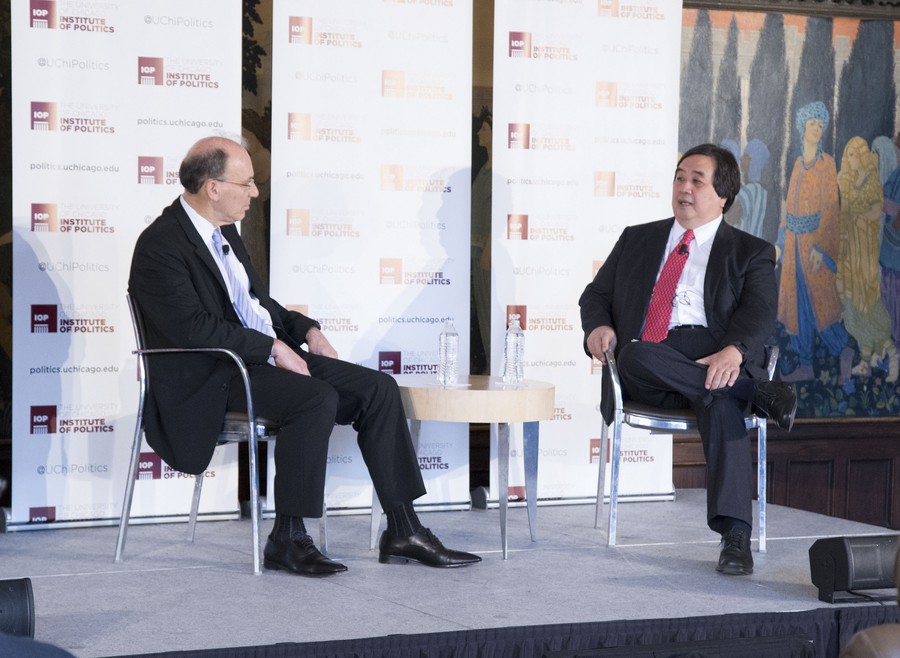 The conversation centered on the breakdown in international relations occurring under the Trump administration, along with reasons for both distress and optimism.

Koh summed up the thesis of his book in three words: “Trump’s not winning.” He  argued that despite the current administration’s contempt for the principles of international law, the damage to the United States’ relationships and reputations can still be repaired. Additionally, the White House’s most controversial policies, like the travel ban and family separation, have energized a popular resistance movement.

Koh pointed to the current diplomatic tensions with North Korea as an example of the Trump administration’s foreign policy failures, criticizing the way the White House has neglected to deal with the threat of North Korean cyberwarfare. He also denounced the way that Trump has publicly praised Kim Jong-un.

“I went to North Korea in 2000 with [Madeleine] Albright, and the one rule we had was you never have the leader meet our president until the end of the line, after they’ve made all the concessions. Only then could they get the privilege of having a photo opportunity with the president of the United States,” Koh said.

“Our president instead is now wandering around the U.N. General Assembly saying, ‘Where is [Kim Jong-un]? I love him, I love him,’ even though he has millions of people in labor camps.”

Koh reflected on his time serving in the Obama administration as well. When asked about the greatest failures of the Obama White House in the international sphere, Koh pointed to the Syrian Civil War.

“I think [the Syrian war] was an addressable issue in 2011. And we let the country implode, the refugees flood out and destabilize Europe, cause Brexit and arguably help get Trump elected—and to pour fuel on the fire of this global anti-globalist movement,” he said.

Koh said that one of the foreign policy successes of the Obama Administration, however, was the Obama-Clinton doctrine of “smart power”—the use of multiple forms of leverage, including both diplomacy and military force, to pressure an adversary into a negotiated solution.

Koh also took questions on domestic politics. In response to an audience question about the consequences of Brett Kavanaugh’s confirmation to the Supreme Court, Koh stressed the danger of the Court’s now predominantly anti-globalist stance on the validity of international law.

When a student in the audience asked about the origin of Koh’s illustrious legal career, he offered advice.

“When I went to law school, I knew I wanted to do international law, but I actually didn’t start until I graduated and was clerking…. I went to these panels and these old white guys were always on the panels. They’d ask them questions, and they’d pontificate, and I would think to myself, ‘I could never know what they know, and I’ll never catch up with them.’ But then I started working on a particular matter that got into the news and they had a panel on it. I showed up and the same guys were there; they were pontificating and I realized that what they were saying was [wrong]…and I realized when the world moves so fast, if you just pay attention, what you know will be more relevant.”