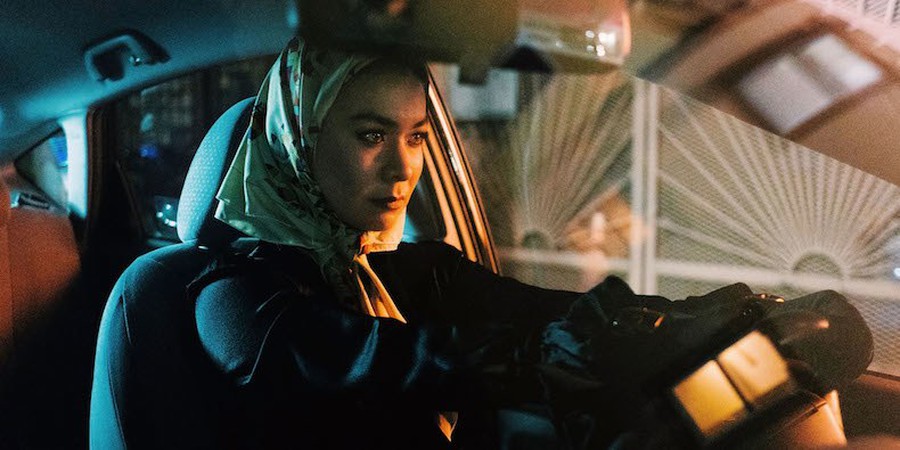 Mitski's "Be The Cowboy" tour is mesmerizingly powerful

Everyone who talks about indie-rocker Mitski’s music talks about it as if it just comes out of her involuntarily. It is difficult to find a review of her music that doesn’t talk about the raw, pent-up emotions of her subconscious pouring out into the microphone in a cathartic flood. Everyone talks about Mitski as if she were a victim at the mercy of her own music, but her sold-out performance Thursday at the Vic Theatre proved otherwise: Mitski is in total control.

The openers, electropop duo Overcoats, were already on stage shrouded in fog and purple light (and wearing overcoats, naturally) as I arrived and staked out some space in the back of the already-filled floor. The duo delivered haunting harmonies over dark, pulsing pop, accompanied by sparse drumming. The two singers twirled with abandon around the stage like mirror images of each other, singing Haim-like harmonies on songs that teetered between indie pop and club music, while their touring drummer Sarah Valdez remained stoic and focused. Only the singing, drumming, and occasional guitar was performed live, while the rest of the music was supplied by prerecorded tracks. While definitely unique, the half-band, half-laptop approach started to wear on me and I couldn’t help but think that they would feel less like a karaoke act if they would just hire someone to play the synth and bass parts.

The Overcoats walked off stage clapping—for themselves, it seemed. Then, jazz, apparently Mitski’s pre-show music of choice, filled the century-old theatre. Then the stage went dark and Mitski finally appeared, dressed in black from head to toe, walking with poise to take her spot at the microphone. She stood straight up in the center of the stage, her arms folded behind her back. Her bandmates were pushed to the periphery: drums and guitar all the way to the left, bass and keyboards to the right. Prior to the current tour for 2018’s critically acclaimed Be the Cowboy, Mitski had performed as a three-piece, playing bass and singing while accompanied by a drummer and guitarist. At the Vic, however, she played with a lush five-piece, relieving herself of bass-guitar duties and allowing herself to focus on the vocal aspect of her performance. It was clear that this was not a band playing their group’s songs—this was a Mitski concert.

The most striking part of Mitski’s performance was how absolutely deliberate it was; there wasn’t an accidental move all night. In fact, she didn’t move at all until the second song, “I Don’t Smoke,” when she mimed holding a cigarette with one hand, the rest of her body perfectly still. Her eerily intense focus captivated the audience, who erupted in applause at every chance they had. Her heart-wrenching vocals soared over the band as the instrumentals veered between heavy, dissonant grunge and electropop. The relatively sparse stage setup featured three monolithic screens behind the band which played atmospheric art films all night, alternating from television static to shots of traffic to rose petals falling in slow motion. The stunning visuals only added to the mesmerizing enigma that is Mitski.

Mitski’s deceptively simple songs and sickly-sweet melodies came to life as she supplemented her vocals with what looked more and more like interpretive dance. Her performance of “I Will” was particularly compelling in this respect. The show developed a punk edge as the band blasted into a scorching rendition of “Townie,” a hit single off of 2014’s Bury Me at Makeout Creek. So much is said of the deeply sad, confessional nature of her music that it’s easy to overlook how often her music flat-out rocks. Then, she went right into disco-tinged “Nobody,” much to the pronounced euphoria of the crowd.

Though this is the Be the Cowboy tour, Mitski played songs pretty evenly from each of her critically acclaimed last three albums and even dug back into her self-released music from her college days for a song or two. Though I was unfamiliar with her song “I Want You,” I couldn’t help but find it to be one of the most moving songs of the night. The band played at an (uncommonly) tasteful volume throughout the set, allowing Mitski’s vocals to shine through. When the band stepped off for Mitski to play a solo acoustic rendition of her achingly beautiful “A Burning Hill,” I finally witnessed the inevitable, what I had been waiting for all night: someone weeping uncontrollably.

When Mitski did speak, it was only to express how sincerely thankful she was to her fans: “I’m not much for banter, all I can tell you is…I can’t even tell you how grateful I am for you. I write all these songs when I’m alone, so I don’t really think about you people understanding them. Being understood around all these strangers makes me…not so scared of other people.”