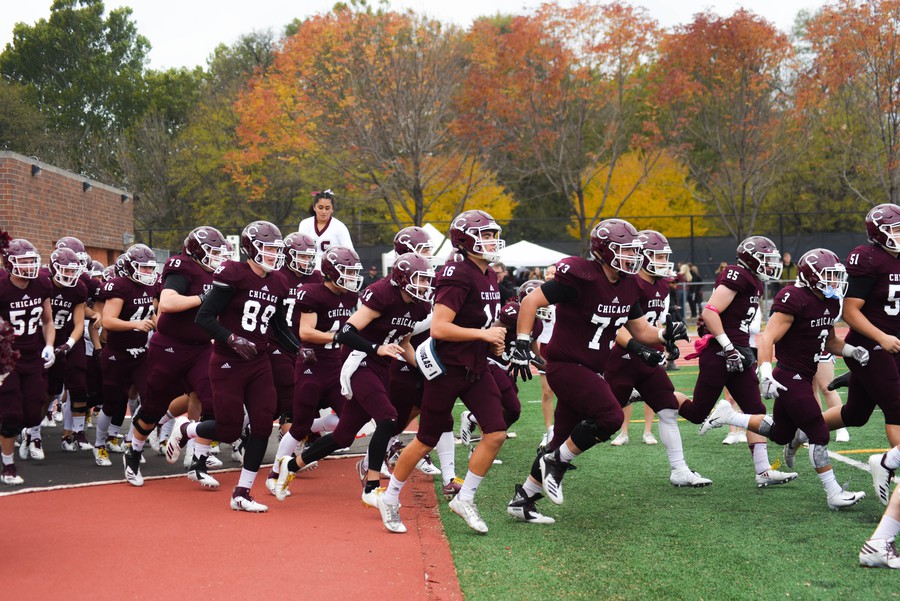 The football team takes the field on October 27 before a homecoming win over Ripon.

The Maroons’ crushing victory is highlighted by the relative strength of the 2018 Red Hawks, which entered the game 5–2 overall and 2–1 in conference. The Maroons leave their win 3–1 in the MWC-N, second only to a 4–0 St. Norbert team.

Despite entering the game with a conference-topping 43.3 points per game, the Red Hawk offense quickly found itself overwhelmed by a dominant Maroon defense which allowed only 235 yards and six points all game. Second-year nose tackle Jackson Ross posted a noteworthy performance, accounting for three out five Maroon sacks. Second-year Ross Martin and third-year Ben Christensen had superb performances on the defensive line, accounting for the remaining two sacks with one each. Fourth-year defensive back Jeremy Vincent rounded out the Maroon’s defense with a commanding presence in coverage, tallying up 10 tackles and one interception.

Facing such defensive dominance, the Red Hawks tottered on the offense. Their efficiency noticeably declined, with Ripon converting only 39 percent of their third downs. This fecklessness was manifest in the final score: Despite playing 20 more offensive snaps and possessing the ball for nearly 10 more minutes, the Red Hawks found themselves unable to translate playing time into points on the majority of their drives. 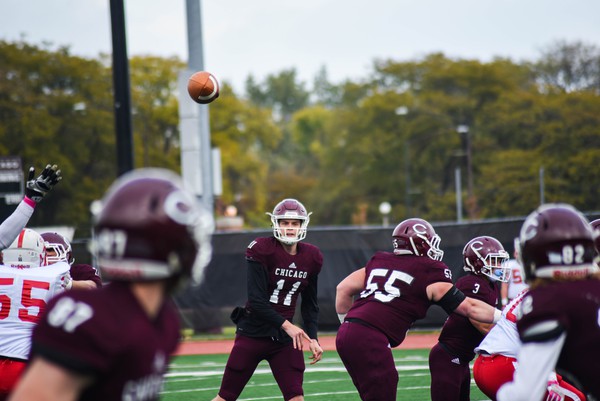 By contrast, the Chicago offense recorded a strong day on the back of an electrifying second quarter, with the Maroons scoring 21 points in fewer than seven minutes. Most memorable for the Maroons was a five-play drive to close out the second quarter. With only 49 seconds remaining in the half, third-year quarterback Marco Cobian ran for nine yards himself and completed four passes in a row for a combined 18 yards, eventually finding first-year wide receiver Jacob Jackson for the touchdown.

Standouts on offense include first-year phenom Nicholas D’Ambrose. The versatile running back continued his strong debut season with a 128-yard performance, racking up 62 yards and a touchdown on the ground and 66 through the air. His performance was highlighted by a wild, hurdling scramble for the endzone from six yards out. Six games since his first start on September 22 against Illinois College, D’Ambrose averages 63.2 yards per game and has amassed a sum of 10 touchdowns heading into the last game of the regular season.

When asked about the atmosphere of the homecoming game, third-year Bill Rotnicki said, “It’s always great to see so many parents come out for the homecoming game, and I’m glad we got another win out of it. The team played great and I can’t wait to see how we’ll finish the season.”

The Maroons play their final game of the regular season on Saturday, November 3, at conference rival Macalester College. Kickoff is scheduled for 1 p.m.