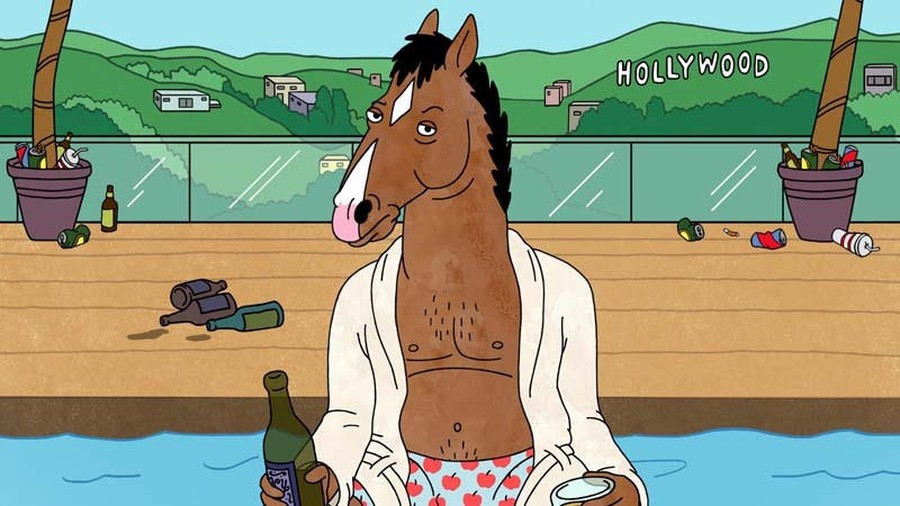 When it premiered on Netflix just over four years ago, BoJack Horseman seemed to offer few compelling reasons to exist in the already overcrowded landscape of adult cartoon shows. In BoJack Horseman’s first half season, the show had yet to find its footing. The premise of a washed up ’90s sitcom star, attempting to return to the public eye with a ghostwritten biography, was made slightly more off-putting to some by its anthropomorphic animal characters. Not to mention, the story seemed rather predictable—BoJack (voiced by Will Arnett), the eponymous former sitcom star, would fall in love with his bookish ghostwriter, Diane. In a traditional sitcom structure, BoJack might have instead befriended his former sitcom rival, Mr. Peanutbutter, encouraged his roommate, Todd, to pursue his dream of making a rock opera, and developed a more professional relationship with his agent/ex-girlfriend, Princess Carolyn.

Yet, we soon realize BoJack Horseman does not function like a traditional sitcom. In the series’ first season, BoJack emotionally tortures every important person in his life. Not only is BoJack not dating Diane, he is forced to watch Mr. Peanutbutter propose to her on reality television. Not only does BoJack not help Todd develop his career, he actively destroys it to ensure that Todd stays in his life. Not only is there no improvement in BoJack’s relationship with Princess Carolyn, he emotionally manipulates her to keep him on as a client. This has yet to scratch the surface of the deep emotional pain that exists in the final four episodes of the season, in which BoJack Horseman fully commits itself to asking whether a person can still be “good” after wronging so many people. In choosing to tell this story, BoJack Horseman has gone from middling reviews to being considered one of the best shows on television—even drawing comparisons to Mad Men.

Now in its fifth season, the show continues to focus on its protagonist’s morality, but with an added self-awareness to its profound and subtle power to comment on societal norms. Previous seasons shied away from feminism narratives via B-stories, but BoJack Horseman’s writers now finally embrace the media narrative that has been driving what feels like every national and international news scandal: the #MeToo movement. By using feminism as an internal framework to this season, the show creates a meta-critique of BoJack Horseman’s own potential societal influence in normalizing the behavior of toxic men. Viewers are forced into a more nuanced moral qualification of BoJack’s morality (or lack thereof).While the meta-critique of its role in the society and continued examination of morality might sound serious, BoJack Horseman is, after all, a comedy—and quite a funny one at that. As the show picks up this season, BoJack has just started filming his new show Philbert, a prestige cop drama perfectly satirizing True Detective. With Rami Malek impeccably cast as the self-proclaimed genius showrunner Flip McVicker (parodying real-life showrunner Nic Pizzolatto), the show delivers its most hilarious content through the destruction of absurd cinematographic and writing tropes of modern dramas. Yet Philbert also serves as the vehicle for BoJack Horseman’s critique of itself. In the show within the show, BoJack plays the eponymous detective who is being investigated by internal affairs for having potentially murdered his wife. Lampooning nebulous scripts, confusing timelines, and unreliable narrators, Philbert eventually comes to embody a depressing reality: Men in society rarely, if ever, have to accept responsibility for the pain they inflict upon women.

As viewers watch BoJack harm strangers, acquaintances, close friends, and family without any tangible consequences for himself, the show posits whether or not his actions normalize toxic behavior. As the reality of Philbert and the reality of his own life blur together, BoJack continues to follow the cycle of highs and lows as established in previous seasons. A major turning point in this cycle comes in “Free Churro” (episode six), which consists entirely of BoJack’s eulogy speech for his mother, Beatrice. The excruciatingly painful episode is balanced by humorous callbacks to previous episodes and an intensely vulnerable description of Beatrice’s final minutes of life. Commanding laughs and tears, “Free Churro” is likely the year’s best television episode, and one that will certainly draw Emmy voters’ attention to Will Arnett’s performance. Season five might offer the most developed takes on each character so far. As is consistent with most of the series, Diane and Princess Carolyn face nuanced storylines—Diane faces an identity crisis while Princess Carolyn, in the process of adopting a child, grapples with balancing motherhood and her career. Formerly, one of the larger complaints from fans and critics had been the lack of depth given to Mr. Peanutbutter and Todd’s narrative arcs. However, these complaints prove invalid in the fifth season, where the characters’ former arcs continue to unravel. Mr. Peanutbutter must examine why his previous three marriages fell apart, through which BoJack Horseman interrogates the Hollywood actor’s compulsion to marry younger women. Todd continues to wrestle with his asexuality, as the show asks us to consider a modern social dilemma: Given an incredibly limited dating pool, should asexuals choose loneliness or incompatible relationships?

All in all, this season of BoJack Horseman helps solidify its status as one of today’s most consistently great TV shows. Perhaps season five is not the show’s funniest, nor the show’s happiest—maybe not even the show’s best. But it surely gives us BoJack Horseman at its most self-critical.