CSO Season Opens With a Cautionary Tale from Russian Composers 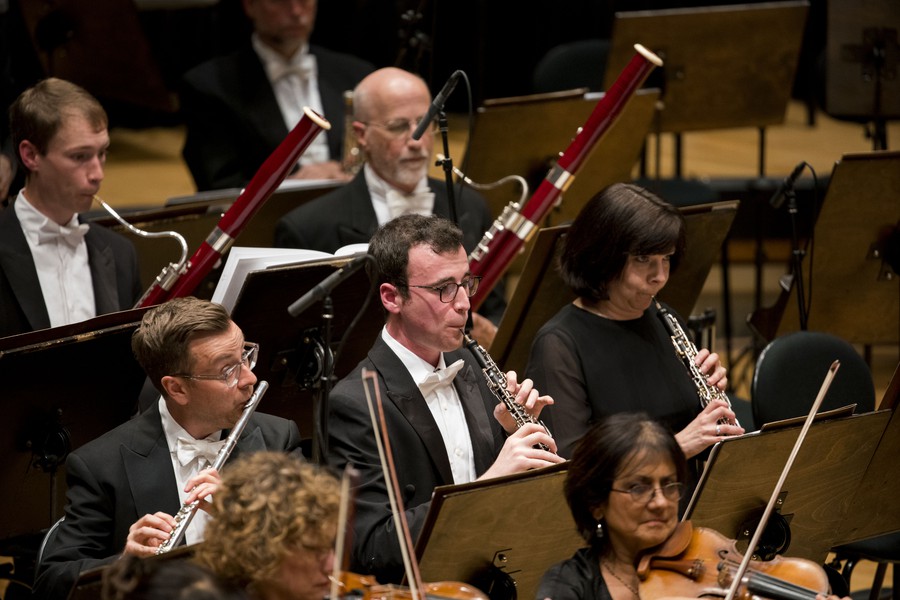 The Chicago Symphony Orchestra (CSO), conducted by Riccardo Muti, opened the 2018–2019 season on Friday, September 21, with a program of Russian music.

This reviewer saw the performance the day after opening, on Saturday, September 22nd. The evening began with the CSO’s debut performance of Sergei Prokofiev’s Sinfonietta Op. 5/48, first written in 1909 and later revised in 1914–15 and 1929. Foreshadowing the composer’s first symphony, often referred to as the Classical Symphony, this five-movement work is written in the style of Haydn and Mozart. It breaks from classical style with unexpected harmonies in true Prokofiev fashion. CSO’s performance was light and colorful, and the Sinfonietta served as an intriguing, if unorthodox, prologue.

Following intermission, the orchestra was joined by the men of the Chicago Symphony Chorus and bass soloist Alexey Tikhomirov for a superb performance of Dmitri Shostakovich’s Symphony No. 13, Op. 113 (Babi Yar). Written in 1962, this five-movement work was set to texts by Yevgeny Yevtushenko, a young, rather vocal Russian poet, but was attacked by Soviet censorship, forcing Yevtushenko to edit parts of his poems.

In 1961, Yevtushenko published what was to become one of his most famous works, Babi Yar, following a visit to a seemingly ordinary hilltop in northern Kiev called Babi Yar. The site marks the location of the massacre of nearly 34,000 Jews on September 29–30, 1941, by Nazi forces and their collaborators. In the months that followed, tens of thousands of Jews, Russians, Ukrainians, and other individuals targeted by the Nazi regime were murdered at Babi Yar, bringing the estimated total to 100,000–150,000. At the time of Yevtushenko’s visit, the grand memorial that stands at Babi Yar today was nowhere to be seen, a fact which opens the poem: “There is no memorial above Babi Yar, / The steep ravine is like a crude tombstone.”

The CSO began the first movement, titled and set to Babi Yar, with a chilling and ominous orchestral introduction marked by the tolling of a bell. The choir and soloist entered, aptly presenting Yevtushenko’s narrative of Jewish suffering with allusions to the Dreyfus affair, the Belostok pogrom, and the fate of Anne Frank. Shostakovich’s dark orchestral writing and clear, rhetorically driven vocal lines create a movement that is unbelievably touching. The anti-Semitic episodes that Yevtushenko describes do not quite feel sad, and his definition of the “true Russian” as one who opposes anti-Semitism is not quite patriotic. Instead, Shostakovich evokes a bleak and desolate tone that Muti conveyed with each brooding interlude and raging climax, making the room feel bitterly cold.

The suitably playful second movement, Humor, satirically depicts comedy as an instrument of dissent with which to undermine “tsars, kings, emperors, / rulers of the world.” In the Store draws attention to hard-working and undervalued Soviet women; Fears, nearly as controversial as Babi Yar, paints life under the constraints of Soviet surveillance; and A Career, the slightly lighter finale, praises those who—like Galileo, Pasteur, and Tolstoy—have not been coerced into conformity.

Shostakovich’s Symphony No. 13 denounces the Holocaust, Soviet anti-Semitism, and other morally reprehensible practices of the totalitarian dictatorship under which it was composed. Though the Soviet Union has fallen, this Symphony stands as a denunciation of the religious persecution, prejudice, and tyranny that continue to plague humankind today. The CSO accomplished much more than a memorable season opener: Muti successfully reaffirmed the relevance of classical music for all who question it with a work whose cautionary message ought not to be forgotten.

The accompanying image, which previously depicted the Civic training orchestra, has been updated to reflect the Babi Yar concert.