Hairy Who? The Art Institute Has the Answer 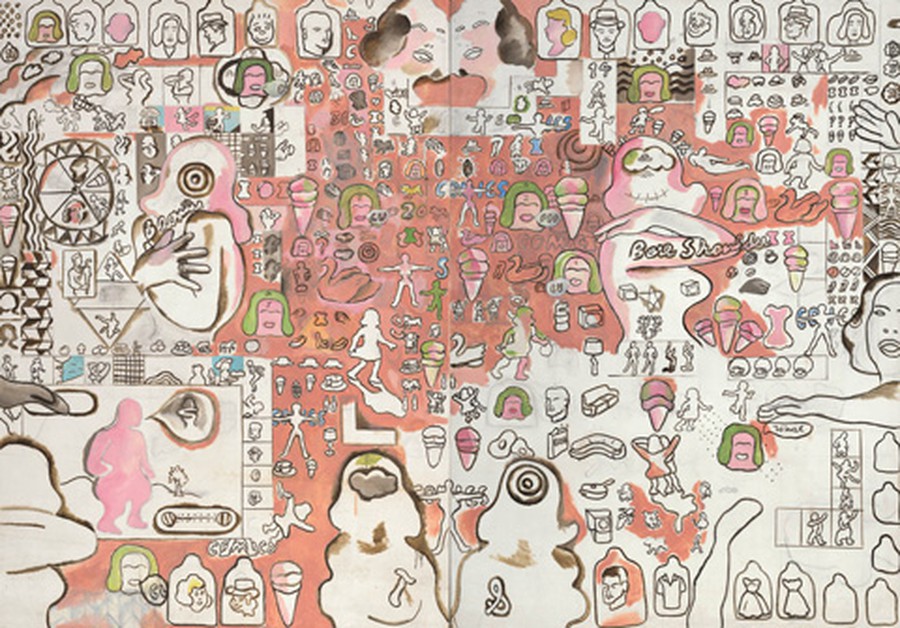 A work by Suellen Rocca, a member of Hairy Who

As the Art Institute’s summer exhibit of Sargent’s Gilded Age masterpieces comes to a close, their new fall exhibit, Hairy Who? 1966–1969, pounds impatiently at the door. Hairy Who is the name of a collective of six artists whose bizarre and endlessly entertaining artworks have taken over much of the museum’s temporary exhibition space.

The group was first formed for strategic purposes. The recent graduates from the School of the Art Institute—Jim Falconer, Art Green, Gladys Nilsson, Jim Nutt, Suellen Rocca, and Karl Wirsum—realized the benefits of jointly displaying work. In 1964, they approached Don Baum of the Hyde Park Arts Center and were granted space for a joint show. From there, Hairy Who went on to put together two more Hyde Park exhibitions, along with some in San Francisco, New York, and Washington, D.C.

The Art Institute’s survey of Hairy Who’s work is especially conscious of their history. The pieces are organized not by artist, nor by medium, nor subject. Rather, the curators have done their best to recreate each of the group’s six shows, providing the historical context of their success (or, in some cases, failure). This unorthodox decision makes sense in the context of the group’s work because Hairy Who’s exhibitions were artworks unto themselves. Rather than have a joint collection of individual works, they combined forces to create a complete publicity scheme for each of their exhibits. On view on the first floor of the Art Institute, visitors can see comic books and posters, each as amusing and original as the artworks themselves. One lithograph poster mocks traditional advertisements, satirically declaring that “Hairy Who makes you Smell Good.”

Upon entering the first gallery, displaying the works from the 1966 Hyde Park exhibit, visitors are immediately bombarded with unnatural colors and discomforting graphic designs. But perhaps the most disconcerting characteristic of the works is the amount of exposed paper. Especially following the lush canvases of the nearby Sargent show, the works in Hairy Who? 1966–1969 seem unfinished. Falconer’s doodle-like watercolors on wrinkled paper and Nutt’s nearby characters sketched on plexiglass are so focused on the unearthly figures in the foreground that they neglect any background.

Even while the young artists enjoyed flaunting their irreverence for formal art, with self-deprecating titles like Falconer’s “Morbid Sunshine by a Minor Artist,” Hairy Who’s talent and thoroughness is evident. Even with Nutt’s absurd plexiglass images of grotesque figures, his works seem clearly premeditated. In fact, the plexiglass medium used was labor-intensive, requiring careful planning and preliminary sketches of the reversed image. Nilsson’s pieces reveal an equal mastery over her materials. Whimsical and funny, “Duck Patrol” shows abstracted ducks in uniform, complete with flags and trumpets. Her watercolors are also impressively planned compositions; each is a full patchwork of colorful shapes worthy for its visual impact as much as for its subject matter.

While walking through the dizzying rooms of the Art Institute’s exhibition, one sees the six characters of Hairy Who dip in and out of relevance, change slowly and abruptly, and play off one another. Nilsson, for instance, experimented with painting on plexiglass like her husband, Jim Nutt, had done in previous years, but to a much more spontaneous and impressive effect. Rocca’s gigantic canvases were unfocused and hard to look at in the earlier rooms, but her bubbly line-designs in later rooms were some of my favorite pieces. Green’s political symbols, meanwhile, were beginning to grow old until he took a sudden turn with a set of beautiful, antique-looking ballpoint drawings.

Much like a TV show, the exhibition takes on complex social issues which are often lost in the sexier drama of its surrealist-pop style. And while some pieces, with titles such as Green’s “Consider the Options, Examine the Facts, Apply the Logic” or “Fat City Phenomena,” are overtly political, I struggled to see much else beyond the bold and entertaining designs of each work. The most obvious examination of social issues is found in the anatomical and sexual references present in so many of Hairy Who’s works and their challenge of conventional physical beauty and sexuality. Yet even the initially shocking bodily forms become monotonous after a certain point, and quickly began to lose their thought-provoking edge. In the last room, a series of painted chairs done by Nutt make crude jokes—one simply depicts dripping boxers with the words “I’m Wet.”

And yet, one can’t help but childishly giggle at works such as these. They are undeniably dizzying, and at times tiring, but there’s something addictive about the six artists’ whimsical imaginations. The Art Institute’s recreation of Hairy Who’s 1960s exhibitions is an experience, to say the least—an experience that brings one straight to the groundbreaking rooms of the 1960s Hyde Park Arts Center.