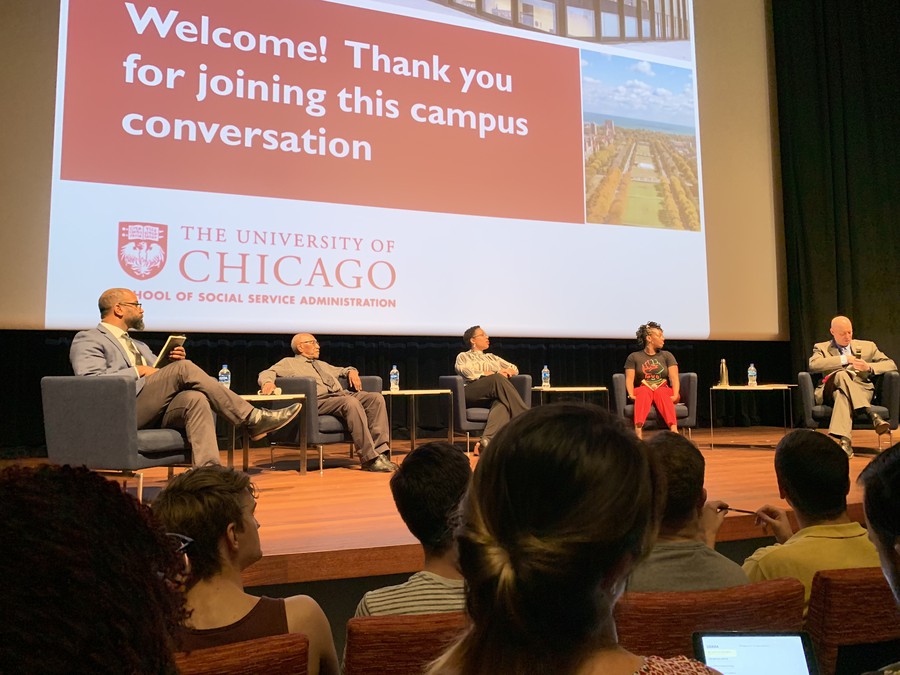 Panelists discuss Laquan McDonald's shooting and issues like systemic racism ahead of the verdict.

The School of Social Service Administration hosted a panel at the Logan Center for the Arts last Wednesday addressing the 2014 shooting of Laquan McDonald. The panelists, experts in racial studies and civil rights, spoke about issues such as systemic racism, police relations, and the criminal justice system.

The panel, moderated by WBEZ anchor and host of the 16 Shots podcast Jenn White, discussed McDonald’s death as a result of an inadequate criminal justice system and the continued presence of systemic racism in Chicago since the early 20th century.

McDonald, 17, was fatally shot multiple times by Chicago Police Department (CPD) officer Jason Van Dyke, who claimed that McDonald charged him with a knife. The police dashcam video released 13 months after the shooting contradicted Van Dyke’s account, revealing that McDonald was walking away from the officer when he was shot. Van Dyke was charged with first-degree murder in November 2015 and is expected to receive a verdict within the next few days.

UChicago Law School professor Craig Futterman, whose successful Illinois Freedom of Information Act request was instrumental in the CPD’s release of the dashcam footage, opened the panel by detailing his initial reaction to the shooting.

“My eyes glazed,” he said. “Stories like this appear in the media in Chicago several times a month, and the basic elements are always the same: Black man shot by the police, police say the shooting was justified, city says it’s investigating, and then silence.”

Historian and civil rights activist Timuel Black then explained the historical context which led to violence and police brutality in certain areas of Chicago. He stated that the Great Migration, in which hundreds of thousands of Black Americans moved to Northern cities from the South, created racial tensions in Chicago in the 20th century.

“There was a social difference, and the police that had protected the people with fairness in the first Great Migration also began to move, and then the color of the police officers changed drastically,” Black said.

Black says that a sharp rise in single-parent families and a lack of economic opportunity within the inner city led to a rise in violence often met with police brutality. These events led to the current prevalence of police violence in the Chicago area.

Reuben Miller, an assistant professor at the School of Social Service Administration, continued by emphasizing that white officers are not the only ones responsible for police violence.

Janaé Bonsu, codirector of Black Youth Project 100 and Ph.D. student at the University of Illinois at Chicago, stated, “Sure, an individual officer can be prejudiced. What is racist is when the criminal legal system, police policies and procedures, [and] FOP union contracts…legitimize officers’ actions or lack thereof.”

Referring to the McDonald shooting, Bonsu added, “If Jason Van Dyke gets an acquittal, then it signals to everyone—whether you are a black person, brown person, officer or not—that it doesn’t matter what you do. You can literally get away with shooting someone 16 times, and the system that you work for will sanction it and legitimize it. That is racism.”

He is guilty of second-degree murder and 16 counts of aggravated battery with a firearm.