A Curious Incident at the Steppenwolf 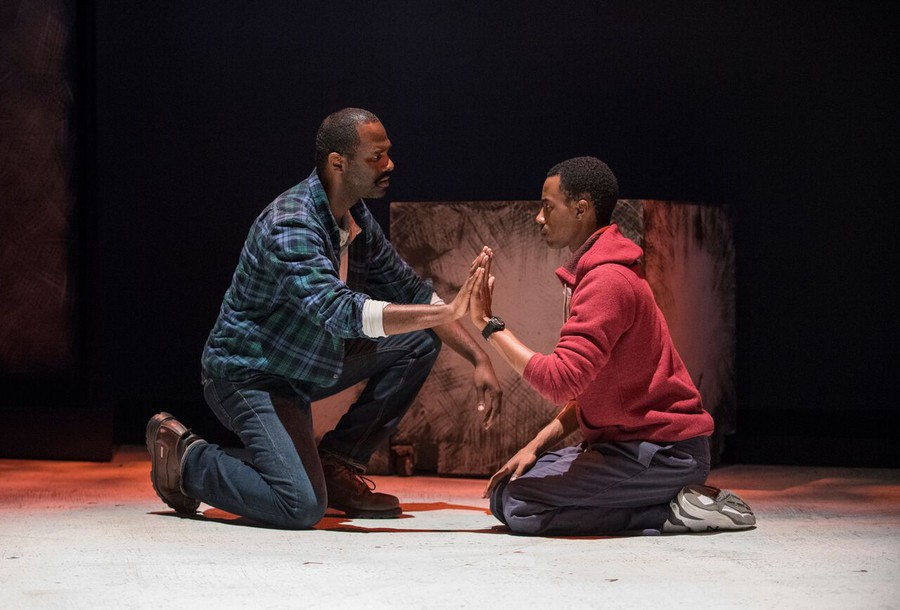 “Does this mean I can do anything?” Christopher asks the audience, his voice growing more assertive with each repetition, his face upturned, eyes to the sky as the stage lights gently fade. Imbued with hope and childlike curiosity, this scene in the Steppenwolf Theater production of The Curious Incident of the Dog in the Night-Time is a fitting ending to a play that gracefully explores summoning the strength to overcome the challenges of growing up. Directed by Jonathan Berry, the production is a faithful and charming adaptation of the acclaimed novel of the same name by British author Mark Haddon.

Christopher John Francis Boone is not like most teenagers. The outcome of his day is predicted by the cars he passes on the street (nine red cars is a very good day indeed), he knows every prime number up to 7,057, and can name all the world’s countries and capitals. He doesn’t like loud noises and has a meltdown when strangers touch him, but takes fastidious care of his pet rat Toby and is entranced by the Milky Way. Although Haddon never explicitly labels him as such, Christopher exhibits many characteristics of people on the autism spectrum: inability to maintain eye contact, strict commitment to a routine, difficulty understanding unspoken social cues and norms.

When Christopher (Terry Bell) finds his neighbor’s poodle, Wellington, dead on her lawn in the British town of Swindon, he launches into an investigation, knocking on neighbors’ doors all the way to London to uncover family secrets and overcome his greatest anxieties. With help from his teacher Siobhan (Caroline Neff), Christopher finds the courage to pursue the truth about what happened to Wellington, and exist in a world that never presents its true self on the surface. As he and Siobhan discuss the complexity of body language and the difference between acting and lying, Christopher puts together fragments of secrets that change the foundations of his life.

Tall and gangly, Bell perfectly balances Christopher’s almost childish self-assuredness in what he knows with moments of overwhelming panic when those truths begin to crumble. Christopher’s subtle rocking back and forth and deliberate way of speaking—the words chosen with precise care and almost shot out of the mouth—present a figure deeply uneasy in his surroundings.

Christopher’s parents, Ed (Cedric Mays) and Judy (Rebecca Spence), presented two different ways of raising a child with different needs. Ed has mastered the daily routines that help Christopher get through the day but struggles to connect with his son. He pushes back when Christopher’s school initially won’t let him take an advanced math exam but has trouble controlling his anger when Christopher defies his orders and continues to pursue his investigation. His wife on the other hand doesn’t know how to deal with the rigid order and complexity that life with Christopher entails. Spence’s masterful performance was that of a woman torn by profound love for her child and guilt for feeling unable to take care of his many needs.

For all of the play’s complex themes, gentle humorous moments abound. Christopher wonders where exactly Heaven is in the universe because black holes mean that dead people would have to be propelled into space on rockets which doesn’t happen. Several instances of meta-awareness of the play by characters also provoked chuckles as when Siobhan mentions that the viewers wouldn’t care to hear Christopher explain how he solved a complex math problem on his exam (which he does to rapturous applause as a postscript to the show).

The book is framed by Christopher’s investigative notebook, where he describes his thoughts and observations. The play somewhat awkwardly repositions the book, with interspersed moments when Siobhan narrates parts of the diary and many times when Christopher vocalizes his thoughts. Characters often speak when referenced in Christopher’s diary, creating the impression that Christopher has internalized some of the world’s multi-layered complexity.

The intimate stage of the Steppenwolf, though spare in its set design, creatively conveyed the intricate workings of Christopher’s mind. This allowed the audience to understand mundane activities and tasks through the lens of Christopher's unusual sensory experiences.  As he searched his house for clues about his mother, the screen behind the stage showed his discoveries in a series of neatly organized nested bullet points, mimicking Christopher’s rigorously logical mind. Stepping into the tube station, a seemingly unending wave of bright signs and ads streamed across the screen accompanied by voices from all directions hawking coffee, mattresses, tax advisors, and people scurrying in all directions below.

Warm and bighearted, the stage adaptation of The Curious Incident of the Dog in the Night-Time carefully preserves the source novel’s sense of empathy and curiosity. Pathos and humor go hand in hand here, undergirded by a confidence in what is true and right. While Christopher may need to learn the many ways to interpret a raised eyebrow, the adults in his life have much to learn from him, as when he surprises Siobhan by explaining to her that the word “metaphor” is in it of itself a metaphor.